The Army says 12 are dead, possibly including alleged shooter, and 31 wounded. Updated 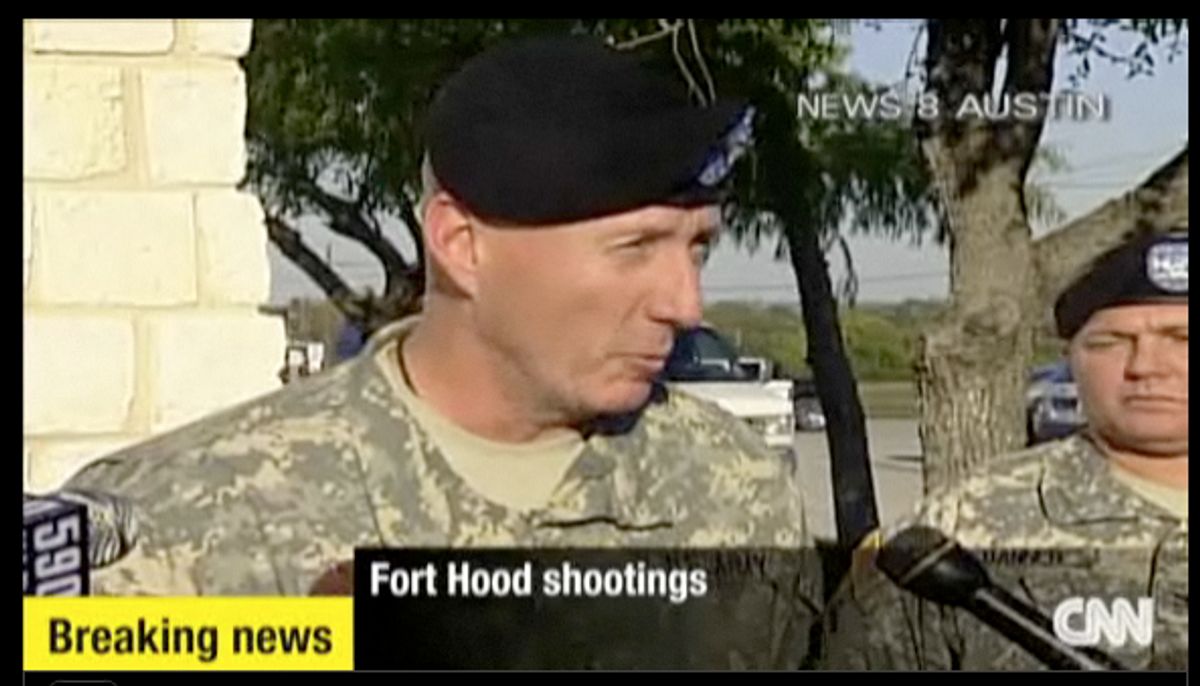 Fort Hood, the country's largest Army post, was the scene of a tragedy on Thursday, a mass shooting. Details are still a little fuzzy as reports come in, but the Army says 12 people have been killed and another 31 were wounded.

Sen. Kay Bailey Hutchison, R-Texas, appeared on MSNBC to discuss the incident, with information she'd received from a general on the post. According to Hutchison, the shooting took place at the Fort Hood Soldier Readiness Processing Center. Typically, this is a facility where military officials go through a final check on the preparedness of soldiers deploying for war -- confirming everything from whether the troops have completed their training to whether they've gotten the proper vaccinations. It's also the first screening point for soldiers returning from theater, and the first time they are asked questions about the potentially serious mental consequences of combat. Hutchison said that in this case the center was "processing soldiers to go to Iraq and Afghanistan."

There's been some confusion and some conflicting reports about details of the incident because of the chaos that naturally follows anything like this, but Hutchison said she's been told there were two shooters in this case. Military police wounded one of the shooters, Hutchison said, while the other was not yet apprehended. Also appearing on MSNBC, Chris Haug, a Ft. Hood spokesman, said one shooter has been apprehended and that officials are "investigating the scene for possible other shooters."

It is far too early to guess at the motive behind the shooting. It is not even clear at this point that the person or persons responsible are soldiers. The trauma of going to war, however -- or of going back to war for a second or third time -- is considered an emotional flashpoint for troops and a possible trigger for violence, including murder and suicide.

Update: At a press conference, Lt. Gen. Bob Cone told reporters that the shooter was among those killed in the incident as authorities responded to the violence, but did not specify if the shooter is counted among the 12 reported dead. Cone said two more soldiers had also been apprehended as suspects in the shooting, but he provided no new details about the circumstances surrounding those suspects. He did say that the shooter used two weapons, both handguns.

"It is a terrible tragedy," Cone said. "It is stunning."

Contrary to swirling reports that additional shootings had occurred at other places on post, Cone said all of the violence occurred at the processing center at 1:30 p.m. local time.

President Obama, too, has spoken about the shooting, making brief remarks at an unrelated event Thursday afternoon. He noted that details remain sketchy, but said, "What we do know is that a number of American soldiers have been killed and even more have been wounded in a horrific outburst of violence."

Obama added, "My immediate thoughts and prayers are with the wounded and with the families of the fallen, and with those who live and serve at Fort Hood. These are men and women who have made the selfless and courageous decision to risk and at times give their lives to protect the rest of us on a daily basis. It's difficult enough when we lose these brave Americans in battles overseas. It is horrifying that they should come under fire at an Army base on American soil."

Update 2: Multiple news outlets are now identifying the shooter as Army Maj. Malik Nadal Hasan, who's believed to be in his late 30's.

Update 3: The Associated Press is reporting that Hasan had been a psychiatrist at Walter Reed Army Medical Center, and that he was transfered to Fort Hood this summer. The AP cites unnamed "military officials" as saying Hasan had received a poor performance evaluation at Walter Reed.

Update 4: At a second press conference Thursday night, Cone said that Nadal is not dead, but was shot. As of this update, the alleged shooter is in custody and hospitalized in stable condition. See this post for more.