When did "Parks and Recreation" get so funny? 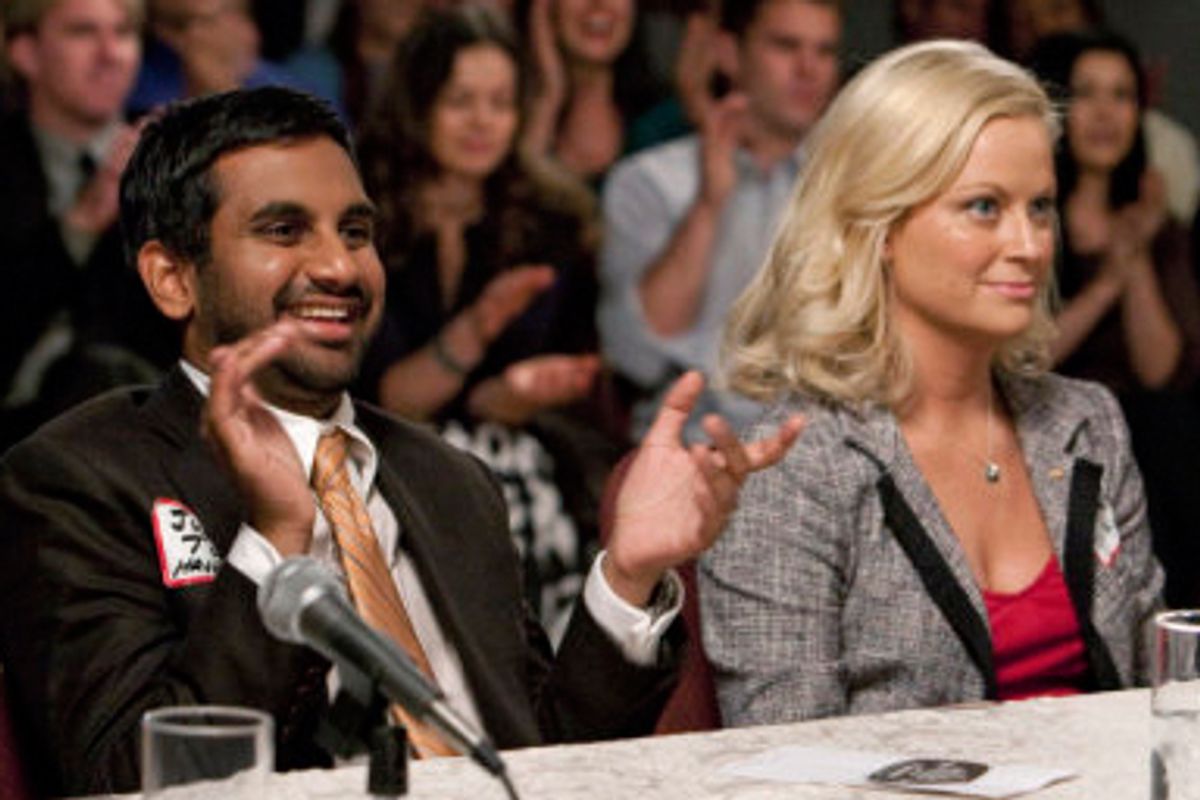 Aziz Ansari and Amy Poehler in "Parks and Recreation."
--

Unlike the big-city cops, doctors and lawyers who crowd their TV screens, most Americans are surrounded by provincial folks who tend to speak about their small-beans pursuits in the most grandiose terms imaginable. NBC's "Parks and Recreation" (8:30 p.m. Thursdays on NBC) captures this hokey flavor of small-town life with renewed vigor in its sophomore season, pairing the low-stakes challenges and low-key love triangles of its Pawnee, Ind., city government officials with a steady flow of smart parody of everything from the second-rung beauty pageant culture to moronic business-speak to Mark Sanford-style sex scandals.

Thanks to some unbeatable episodes from the mockumentary this fall, suddenly it's clear that calling NBC's "Parks and Recreation" a civic-government version of "The Office" is like calling the Eiffel Tower a French version of the Seattle space needle. While the government setting seemed limiting at first, the show's writers have fleshed out the main characters and leaned into the endless possibilities here, from the devolving mental health of Ann's (Rashida Jones) ex Andy (Chris Pratt) to Leslie's (Amy Poehler) budding romance with a local cop (Louis CK) prone to speaking primarily in formal, cop-at-a-press-conference terms ("Miss Knope was attractive to me, as a man. I was attracted to her in her demeanor, I was attracted to her in a sexual manner that was appropriate. I don't want to talk about this anymore").

The writers have also thrown out the burdensome task of keeping running character subplots alive (Will Ann and Mark keep dating? Are Leslie and her new boyfriend a good match?), making it possible to run with episodes like the recent instant classic where officials from Pawnee's sister city in Venezuela come to visit. After bestowing a golden gun from Hugo Chavez to the town ("This gun truly symbolizes the blossoming peace between our two nations," Leslie announces) and exchanging cultural information ("What kinds of birds do you guys eat?" "Chickens." "Us, too! Amazing"), a Venezuelan official named Raul (played hilariously by "Saturday Night Live's" Fred Armisen) makes a short speech that Leslie struggles to spin positively.

Raul: We thank you for the container of sap, the bag of garbage ...

Leslie: (to camera) His English isn't perfect, so I don't think he realizes how insulting he's being.

Raul: We are also sister cities with Kaesong, in North Korea. Their town is far nicer.

Leslie: That's fine, it's my job. I'm a diplomat. I'm not supposed to take it personally.

Raul: We haven't been here a long time, but what we've seen is, really, from the bottom of our hearts, truly depressing. Really, really sad stuff.

Leslie: I mean, that's why people respect Hillary Clinton so much. Because nobody takes a punch like her. She's the strongest, smartest punching bag in the world!

Raul: It's funny, because Antonio said to me, "Can we turn this car around and say we're sick or something or that we lost our way?" Of course that would be rude to you. Hahaha!

Later, the Venezualans attend a community meeting in a third-grade classroom at the local elementary school, so that Leslie can demonstrate to the men what true democracy looks like.

Raul: This is where you guys have your meetings?

Leslie: Well, the location rotates. Sometimes we have them on the volleyball courts. Where do you hold your meetings?

Raul: Well, I'm glad you asked. We usually rotate as well, between different fortresses and citadels and palaces.

Leslie: We don't need palaces. The ideas are what shine in our meetings.

(Cut to a close-up of an enraged man's face.)

Man: What are you some kind of moron?!! Why don't have hand dryers in the park bathrooms?!! They're so much more sanitary than paper towels, everyone knows that!!!

Welcome to the endless joys of community life in America! "This meeting with ugly people yelling? It is like torture," is how Raul puts it afterward, his mind blown by the highly inconvenient nature of democracy. Then he explains how Venezuelans achieve the perfect society: by throwing people in jail. "You undercook fish? Believe it or not, jail. You overcook chicken? Also jail."

In the end, it turns out that Raul and his men are from the Committee to Humiliate and Shame America. This episode (still available on Hulu for a few more weeks), which belongs in the comedy vault right next to Jack Donaghy imitating Tracy Jordan's family on "30 Rock," benefits from the show's writers' increasing habit of giving everything from political scandals to lame local events the Onion treatment.

But something else has shifted on this show. Instead of turning every character into a joke-spewing lunatic, the writers have started to focus on the aspects of each character that feel organic and interesting. Yes, Leslie's always had Madeleine Albright's photograph behind her desk, but when she talks of her admiration for Hillary Clinton and scoffs at the hoochie mama who wins the Miss Pawnee beauty pageant, we understand Leslie as a fleshed-out character, not just a gigantic buffoon who's funny but tough to care about. Hell, even high-fiving frat boy Tom Haverford (Aziz Ansari) has become human this season.

Leslie: You're not from here, right?

Tom: No, I'm from South Carolina.

Leslie: But you moved to South Carolina from where?

Leslie: But you were conceived in Libya, right?

Tom: Wow. No. I was conceived in America. My parents are Indian.

Tom: My birth name is Darwish Sabir Ismailghani. And I changed it to Tom Haverford because, you know, brown guys with funny-sounding Muslim names don't make it really far in politics.

Leslie: What about Barack Obama?

Leslie may be a relentless boob, but she's also the only earnest member of the parks and rec department, which means that she's charged with inspiring her oddball staff. "Everybody take out their thinking caps, and rip 'em up! Then take out your doing cap, because we're gonna do something today!" Leslie pertly informs the office after an inspiring encounter with a self-empowerment guru. Naturally her plans run up against apathetic boss Ron Swanson (Nick Offerman), who tells the camera, "I like saying no. It lowers their enthusiasm."

It's time for audiences to stop saying no to "Parks and Recreation," though, because after a slow start in its first season, this show is firing on all pistons, transforming a source of kooky, mild amusement to the kind of smart, incisive parody that's utterly addictive. We haven't been here a long time, but what we've seen is, really, from the bottom of our hearts, truly hilarious. Really, really great stuff.