Dear Mr. President: What are you thinking?

Stop dawdling on healthcare, forget about Snowe and Lieberman, and become the leader we voted for already 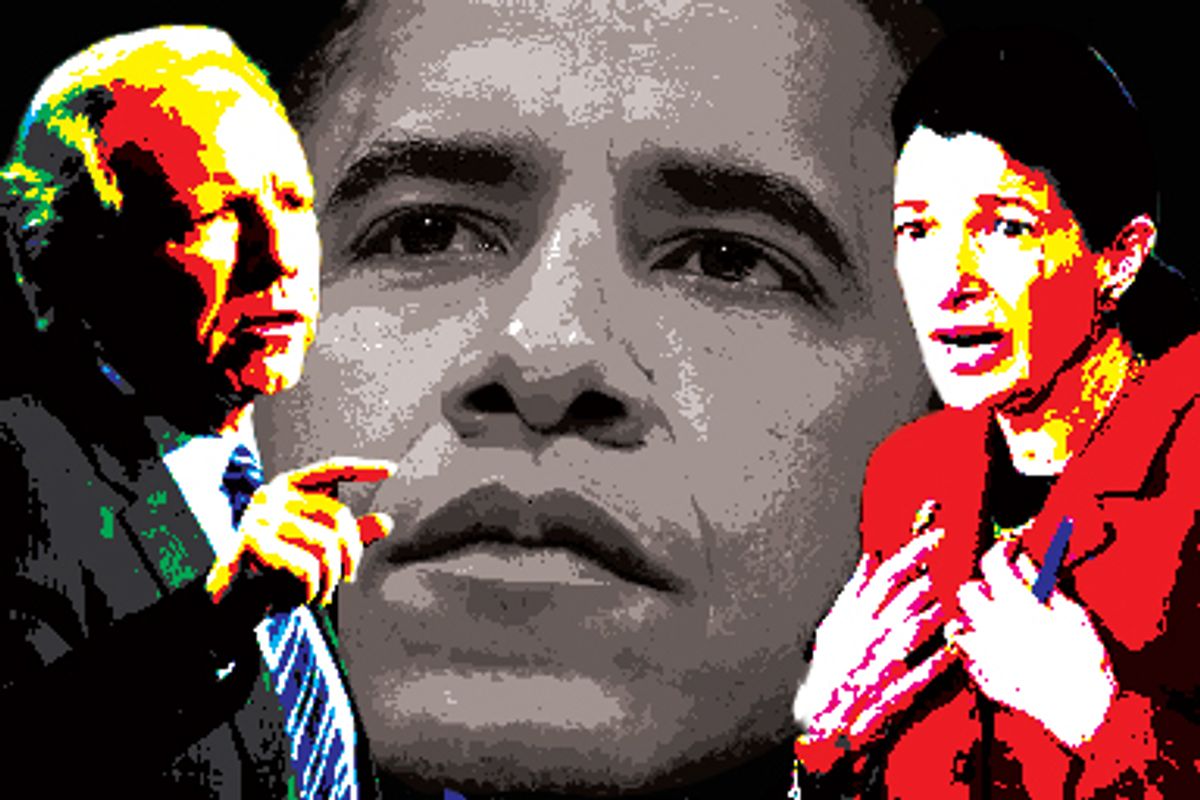 I hate to complain, and I certainly do not want to sound cranky. But time is awasting, so here goes: Nearly 70 million people voted for you because we supported your commitment to ending the war in Iraq, closing Gitmo and creating universal healthcare. Only a couple thousand of them were passionate about the whole bipartisanship thing, and based on my scientific research, exactly 38 believed that Olympia Snowe's vote on the healthcare reform bill would even make it bipartisan. Thirty-eight people! (And you should see them.) So now the other approximately 66,999,962 of us are left wondering, Why did you lose so much time courting her vote?

I mean no offense, but the belief that Snowe's vote made the bill bipartisan was delusional from the start. It was exactly the sort of thing my mother would have come up with -- and she was from Liverpool. I rest my case: Those of us with English parents faithfully attend special 12-step meetings to break through the uniquely English forms of denial. The vote of one extremely withholding woman -- and I say that without judgment -- never changed the nature of the bill, no matter how much you and your staff convinced yourselves it did. It is a Democratic bill -- a quintessentially Democratic bill, in that it's about trying to help those in need. It is about fairness, decency and the common good, the values most Americans were raised on. But you can't even mention those words and ideals these days without getting laughed at by the Republican leadership -- or, worse, tea-bagged.

A great pastor in New York City once said that if you wanted to get into heaven, you needed a letter of recommendation from the poor. Teddy Kennedy got his. So did Lincoln, FDR, Shirley Chisholm. And now it's up to you.

I am not saying that continuing to waste our time -- while people die every day from lack of healthcare -- will keep you out of heaven, although you may get an inferior seat, possibly in the room serving only nursery snacks. How will you face Teddy if you muff this historic moment? Do you think he will share his eclairs with you? His brie?

It's OK that you wanted Ms. Snowe's vote so desperately, but the truth is that she was getting high on not giving it to you. She was getting a hit, like a junkie, from withholding. Believe me, I have dated men like her. She had a chance to participate in greatness, which does not happen all that often anymore in American politics, but the possibility is there now -- for you, for us, for our country.

A huge majority of people in America and specifically in Maine want the public option. For a few months there, she had the power to kill it. Dude, what was that about? Was it some form of Kabuki theater, wherein you knew she would never give you her vote, but you needed to pretend she might for another week? Was it a multilevel chess game that all the people who voted for you were too dumb to figure out? She didn't want decent medical care for the poor and middle class: She wanted power. She, like so many of us, is hungry for what she is not giving -- for generosity of spirit, the only thing that can fill us up. And yet, she chooses to withhold, this woman who happens to have great government healthcare. I bet she and her extended family never worry when they get sick, or even when they need psychiatric care. Not to mention dental, which just kills me to think about -- me and my family, with our terrible English teeth.

So we've lost two or three months to that business. And now we have Lieberman. In some ways, he's even worse, because of -- well, you know -- the voice.

We do not personally blame you for the fact that we have to listen to him. It's political life, on political life's terms. And maybe his therapist or rabbi will help staunch his latest episode of swerving sickness. But recently on "The Rachel Maddow Show," the great Jane Hamsher compared the healthcare debate to a beauty contest in which the contestants who feel ignored start stripping and said that, at some point, one of the directors will convince Lieberman to put his shirt back on. So I am wondering, why can't that be you? Why can't you do what Leon on "Curb Your Enthusiasm" keeps urging Larry to do? Take him the ruckus.

Use your most reliable parenting skills: Joe Lieberman is acting like a petulant, icky little kid -- I say that with love. Use those classic parental standbys, bribes and threats. Back-channel him. Try reverse psychiatry -- "Thank God you stepped in, Joe. Otherwise, we would have been responsible for all those slacker poor people. All those feverish babies and children. All those English expats, with their bad teeth." If that doesn't work, maybe you could just remind him of the famous story from 15 years ago, that family with a 5-year-old girl with leukemia who needed blood in massive quantities to stay alive. You remember: Everyone in her family except her older brother was tested and found to be incompatible. But the boy was afraid of having blood drawn in order to test it, and his parents respected him enough to let him come to the decision by himself.

One day he came to them and told them he was ready. They took him to the doctor, his blood was tested, and it was an almost exact match with his little sister. So the two of them were put on beds side by side in a hospital room, and the nurses withdrew blood from his arm, and let it flow into his sister's. He lay with his eyes closed, in silence for the entire procedure, until the doctor gripped his shoulder and asked how he was doing. The boy opened his eyes.

This kind of profound and innocent moral courage is the most attractive characteristic a person can display, especially a politician. It is time for you to come out vigorously and loudly for Harry Reid by getting your people in line. Reid has managed, with a lot of help from liberals and progressives and too much time lost, to whip most of the Senate Democrats behind what you campaigned for. Now it is time for you to roar. Ms. Snowe and Joe can still choose greatness, too: They have free will, and they may surprise us all. Or, hey, while we are at it, why not hit up George Voinovich? He is not running for reelection and is -- or should be -- rooting around for a legacy. Otherwise, people will scratch their heads while trying to remember who he was. "Oh, Voinovich? Wasn't he the guy up on Laurel who had to tent his house for termites?" He could go out a hero, by simply doing what public servants are supposed to do -- stand up for the people, for greatness, for compassion, fairness and the common good.

So again I ask you, do the right thing, and do it now. Shoot the moon, Boss: right between the eyes.