"The Men Who Stare at Goats": Quick, look away 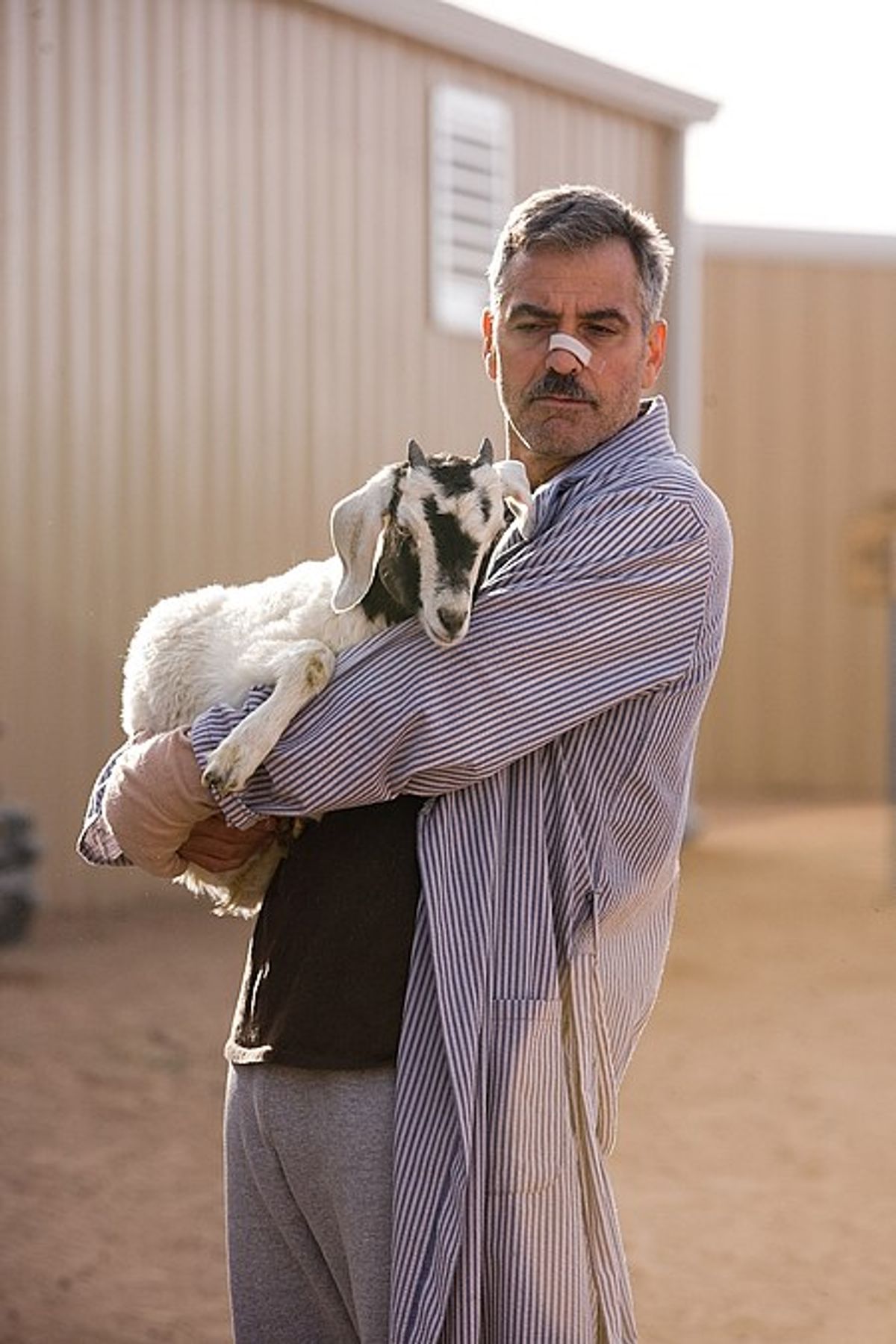 George Clooney in "The Men Who Stare at Goats." (Laura Macgruder)
--

There's a serious lack of subtlety in mainstream American movies these days; for now, at least, the big studios have all but given up on luring grown-ups back into movie theaters. So there were plenty of reasons to look forward to "The Men Who Stare at Goats," a deadpan comedy based on the real-life events chronicled in Jon Ronson's nonfiction bestseller of the same name. The movie is directed by Grant Heslov, producer and co-writer of George Clooney's "Good Night, and Good Luck." Its stars are Ewan McGregor and George Clooney, two great-looking, charismatic, seasoned actors who tend to choose their material carefully and intelligently. And Jeff Bridges and Kevin Spacey show up in smaller, supporting roles. What's not to love?

And at the start, "The Men Who Stare at Goats" seems to have plenty going for it. Ronson's book explores the U.S. military's attempts to -- no kidding -- harness mind power to fight its enemies: If we can put a man on the moon, surely we can send Uri Geller into combat with a bent spoon, right? "The Men Who Stare at Goats" takes Ronson's findings and fashions them into what ought to be a dry, witty little narrative. McGregor plays Bob Wilton, a reporter who, after losing his wife to an editor at the paper where he works, decides to drown his considerable sorrows by going to Iraq to become a war correspondent. Before he's even gotten his feet wet -- or, more accurately, his boots sandy -- he befriends a twitchy, clumsy yet overconfident contractor named Lyn Cassady (Clooney) who, we soon learn, isn't a contractor at all but an ex-soldier with paranormal abilities. He believes he's been summoned to Iraq -- via brainwave messages, more or less -- by his mentor, iconoclastic weirdo Bill Django (Jeff Bridges), who years ago founded a special military task force known as the New Earth Army. (In real life, according to Ronson, the group was called the First Earth Battalion.) Django fell on hard times after he was deposed by a wily, ambitious follower, Larry Hooper (Kevin Spacey). But now his services may be needed again, before the supernatural powers he so firmly believes in are harnessed by his government for the purposes of evil, not good, as he originally intended.

The title refers to a New Earth Army training exercise in which men learn to kill goats by -- you guessed it -- staring at them. And the picture does feature a few great scenes, mostly involving McGregor and Clooney's characters bickering, sparring and otherwise messing about. (You don't want to miss Cassady's demonstration of the infamous and allegedly effective "sparkly eyes" technique.) And although Bridges has only a few scenes, he looks terrific, strutting around with an air of spacey authority: A sort of hippie-dippie military-peacenik shaman, he's got Gen. Custer's beard and Willie Nelson's braid.

But the script, by Peter Straughan (who also wrote "How to Lose Friends and Alienate People"), is almost too sly: The movie's gags are so oblique that they barely stick. When, early in the movie, Cassady tries to fend Wilton off with a multipurpose plastic doohickey that, he claims, is fully biodegradable and "can hurt you in 100 ways," it's funny that the thing looks like a drab version of some Michael Graves-designed bottle opener you'd buy at Target. But not that funny. And while the movie makes a grand stab at satire -- only the U.S. government would go to the trouble of rounding up a large herd of innocent goats for unethical purposes -- it's so unfocused that it's hard to care about how ridiculous its targets are. Worse yet, the picture isn't much to look at -- it's heavy on long, monotonous scenes set in the desert -- and its pacing is alternately listless and lethargic. The whole enterprise comes off as an inside joke that only the director, writer and actors are in on. There's no doubt we need more movies for grown-ups, with jokes that don't hit us over the head, but "The Men Who Stare at Goats" doesn't fit the bill. At best, it might hypnotize you into a stupor.

George Clooney Movies The Men Who Stare At Goats