We are what we trade (and how we trade it)

International trade affects our healthcare, the economy and the environment -- in other words, everything 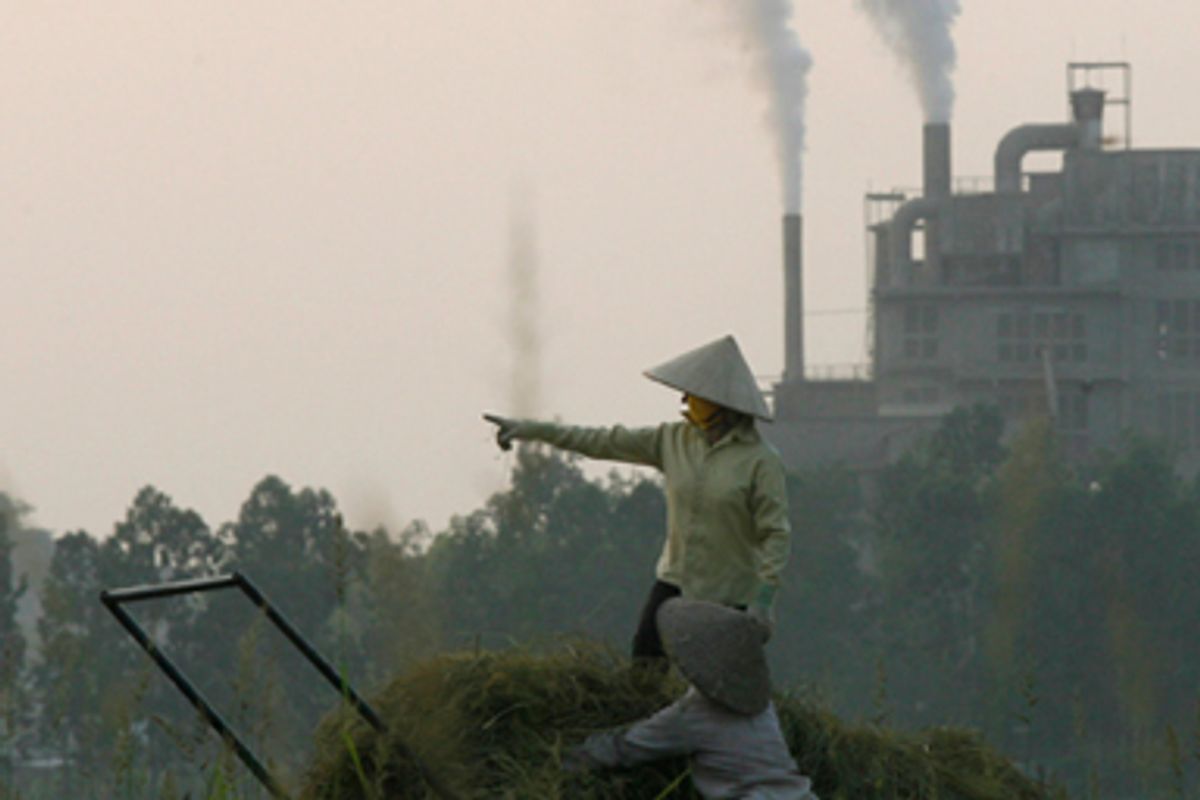 Farmers work on a paddy field near a cement factory in Sai Son village, outside Hanoi
--

Trade and globalization -- when not referencing blockbuster sports transactions or raucous street protests, debates over these abstract terms can give Ambien and Jack Daniel's a run for their money as a cure for insomnia. Of course, that's the problem -- the rules governing what we buy and sell are now playing such a decisive role in almost every major policy that we're falling asleep at our peril.

Most are familiar with trade and globalization, if at all, through the prism of heavy manufacturing in the so-called old economy. We know, for instance, how NAFTA-style pacts helped destroy our factory job base. The economics were unabashed and straightforward: By eliminating the tariffs we charged for goods made in countries with negligible wage and human rights laws, Washington removed disincentives for mass offshoring. With "free trade," our government effectively encouraged corporations to transfer production facilities abroad so as to cut costs via the cheap labor, slave working conditions and rampant union busting that flourishes in the developing world.

No surprise -- two decades into this allegedly glorious "free trade" era, an ever-bigger swath of Flyover America looks just the way flicks like "Roger and Me" predicted: rusted, abandoned, boarded up and/or otherwise resembling a nuclear test site. Even less shocking, that apocalyptic reality has been largely ignored by a political and media establishment that believes economic emergencies are only those that threaten Wall Street bankers. Indeed, if the Beltway chattering class has paid attention to trade reform at all, it has portrayed the cause as a boring "special interest" crusade of supposedly selfish unionists and crazed anarchists.

Circumstances, however, have undermined the narrative power of that deliberately dishonest cliché.

In 2009, trade and globalization have transcended their "old economy" ghetto and become central to the "new economy," healthcare and even the Earth’s very survival.

Remember the stimulus bill that promised a job-supporting down payment on the infrastructure and technology needed to rebuild our country? Yeah, well, the success of lobbyists in neutering the legislation’s "Buy American" provisions in the name of "free trade" has steered much of that money into subsidizing job growth offshore.

Worried about skyrocketing healthcare costs? If you are, then you ought to be wondering about laws that bar Americans from using "free trade" to purchase lower-priced medicines from abroad.

And what about reducing greenhouse gas emissions? Are you interested in avoiding a climate catastrophe? Then realize the planet’s future has far more to do with good old-fashioned tariffs than any neoliberal techno-babble about "cap and trade."

That's right, because global climate change is just that -- global. We must both reduce our own pollution and compel other nations to reduce theirs. We can certainly try that through saccharine promises in a treaty, but it's far more effective to use the market.

That's the beauty of the proposal of Sen. Sherrod Brown, D-Ohio. A new levy on goods made in ways or in nations that ignore greenhouse gas caps doesn't merely discourage American companies from moving jobs to countries whose domestic laws tolerate pollution. It also economically advantages green products/companies/nations, raises revenues for clean energy innovation and -- most important -- appreciates the borderless nature of the crisis.

"Carbon dioxide emissions expand if a company closes down in Toledo, Ohio, and moves to Shanghai, where the emissions standards are weaker, " Brown says.

Put another way, as coma-inducing as the words "trade" and "globalization" may seem, we are what we buy and how we buy it. That means the cause of trade reform isn't everything -- increasingly, it is the only thing.