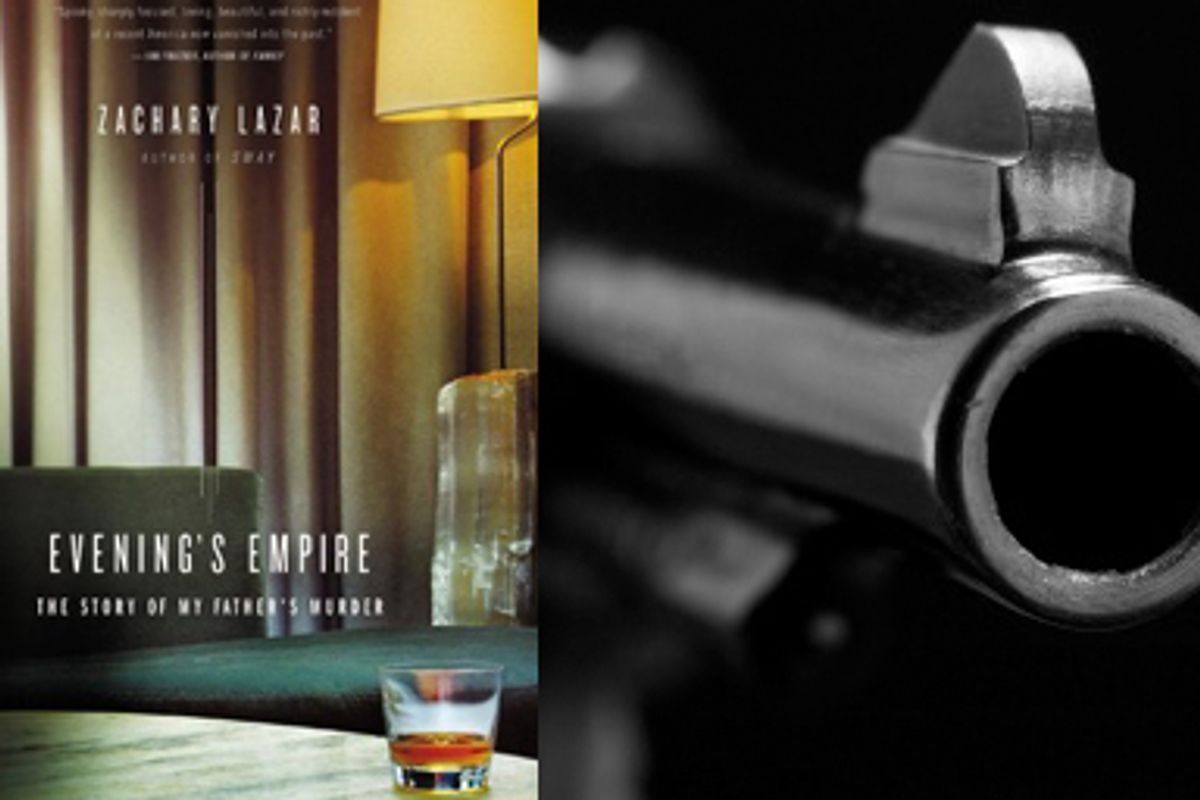 In 1975, Ed Lazar was shot in a Phoenix parking garage stairwell by two men he'd never met. Thirty years later, Lazar's son, Zachary, an acclaimed novelist ("Sway"), began to investigate the murder in preparation for writing "Evening's Empire," a book he had been contemplating for as long as he could remember. No "solution" was called for in any conventional sense of that word: Authorities have known who killed Ed Lazar (two hit men affiliated with the Chicago mafia) and why (they were paid to do it by Ed's former business partner, Ned Warren) for years. But for Zachary, his father's death remained a mystery. How did a quiet, respectable suburban CPA like Ed Lazar, a man whose friends could make no sense of his violent end, wind up dying in what Walter Cronkite described on the CBS Evening News as "a gangland-style murder"?

The answer is Ned Warren, a man nicknamed "the Godfather of Land Fraud." Ed Lazar was killed while on the way to testify before a grand jury about his past business dealings with Warren, a defunct partnership he had long since had cause to regret. Born Nathan Waxman, Warren was an ex-con who'd served a stint in Sing Sing for mail fraud, but managed to gloss over his past when he relocated to Arizona. He accomplished this via assiduous applications of charm, influence and, above all, cash. The monthly payments he funneled to a real estate commissioner were of particular interest to the grand jury, but Warren had his fingers in countless pies, from vending machine distribution to nightclubs. His primary racket, however, was selling lots in substandard or effectively nonexistent subdivisions in the Arizona desert to people who regarded such purchases as investments. In a precursor to the current subprime mortgage crisis, Warren also bundled the loans his investors took out on the plots and resold them as securities.

How did Ed Lazar get mixed up with such a character and why did he allow himself to be implicated to the degree that Warren thought it was necessary to have him killed? This is the enigma that haunts Zachary Lazar, who can barely remember his father. Zachary interviewed his mother, his parents' friends and business associates, other men caught up in Warren's Byzantine web of corporations, as well as reporters and cops who tried to get to the bottom of it all. Documentation of Warren's various frauds and crimes is extensive, in large part because of the Arizona Project, the work of a team of journalists who gathered to investigate the circumstances surrounding the car-bombing death of Arizona Republic reporter Don Bolles in 1976. (In his acknowledgments, Lazar calls the Project "a vivid reminder of the importance of newspapers.")

Nevertheless, the facts do little to explain why Ed Lazar allowed himself to be gulled by Warren and implicated in his wrongdoings. Although "Evening's Empire" is categorized as both memoir and true crime, much of the book reads like a novel and can't possibly be rooted in documentary evidence. Zachary Lazar couldn't know everything his father thought as he drove to meet Warren for the first time, or that Warren was wearing espadrilles during their poolside interview or that his little daughter made a "stiff pretend curtsy" when introduced to her father's new accountant and future partner. The fleeting thoughts of Warren himself (who died in prison in the 1980s), as he roamed his modernist mountainside home, swirling a scotch and preparing to hang one of his associates out to dry, are available to no one. Yet all of this is depicted in "Evening's Empire," a book that Lazar freely admits is "a conjuration," the result of his efforts to "imagine how things could have played out in rooms forty years ago, most of the players long since dead."

He imagines a father chaffing at the limits of modest middle-class existence while surrounded by the high rollers and major players Warren introduced him to. Ed Lazar's friends described him as "more adventurous" than the average accountant. He was caught up in the optimism of postwar America, announcing the launch of his real estate venture by stating "I've grabbed the brass ring" to a group watching the 1969 moon landing. Also, it was Phoenix, a Southwestern go-getter's version of Polanski's Chinatown, "a gaudy jumble of high and low, aspiration and bad taste" whose residents were forever explaining, "It's the Wild West, anything goes." Why shouldn't a clever man like Ed Lazar nab his share? He surely must have known that the same thinking has led countless others to their downfalls, but he must have thought he was too smart to share their fate. And for a while, he was a millionaire. On paper.

Lax regulations and corrupt government officials made Arizona in the 1960s and early '70s a gold mine for the likes of Warren, and an irresistible mecca for ambitious gangsters seeking opportunities outside the established crime hierarchies of Chicago and the Eastern seaboard. Warren knew these guys because he knew everyone, and when he wanted both Lazar and the crooked real estate commissioner eliminated, he turned to a hoodlum looking to advance his own stature in his own way. Zachary suspects that his father was killed not "for what he said, or even for what he might have said later, in further testimony." He simply didn't know that much. The police think Ed was killed to frighten other potential witnesses, but Zachary believes "they killed him to simply show they could do it," a demonstration of power by the shadowy figures who "were all planning Phoenix."

"Evening's Empire" is a moody book, full of men in suits staring into the middle distance in empty rooms and negotiating the posh snake pits that are the restaurants frequented by a boomtown's movers and shakers. The multiplication of Warren's intrigues and a cumulative sense of doom supply its narrative drive. Ed Lazar walked into a trap when he got mixed up with Ned Warren, and at a certain point he surely realized that, feeling the walls close in as his paper millions evaporated. There's a fatalistic, noirish atmosphere to this story, in no small part because we know how it will end, and realize that the interspersed photographs of one of Warren's shabby housing developments will give way to shots of that terrible stairwell.

Yet if "Evening's Empire" is the story of how one man's life -- not only the life he actually led, but the freer life he once hoped to lead -- ended, it is also the story of how another man's life began. In the impossible task of understanding how a decent father wound up "appearing in news stories as the 'lieutenant' to Ned Warren's 'Godfather,'" with a reporter in the parking lot at his funeral jotting down the license plate numbers to check for mob connections, there is the making of a novelist. Lazar writes that his father was "murdered twice" by such distortions. You can see how this might give him a sense of the power in the stories we tell about people, and a never-ending desire to tell truer, better stories of his own.