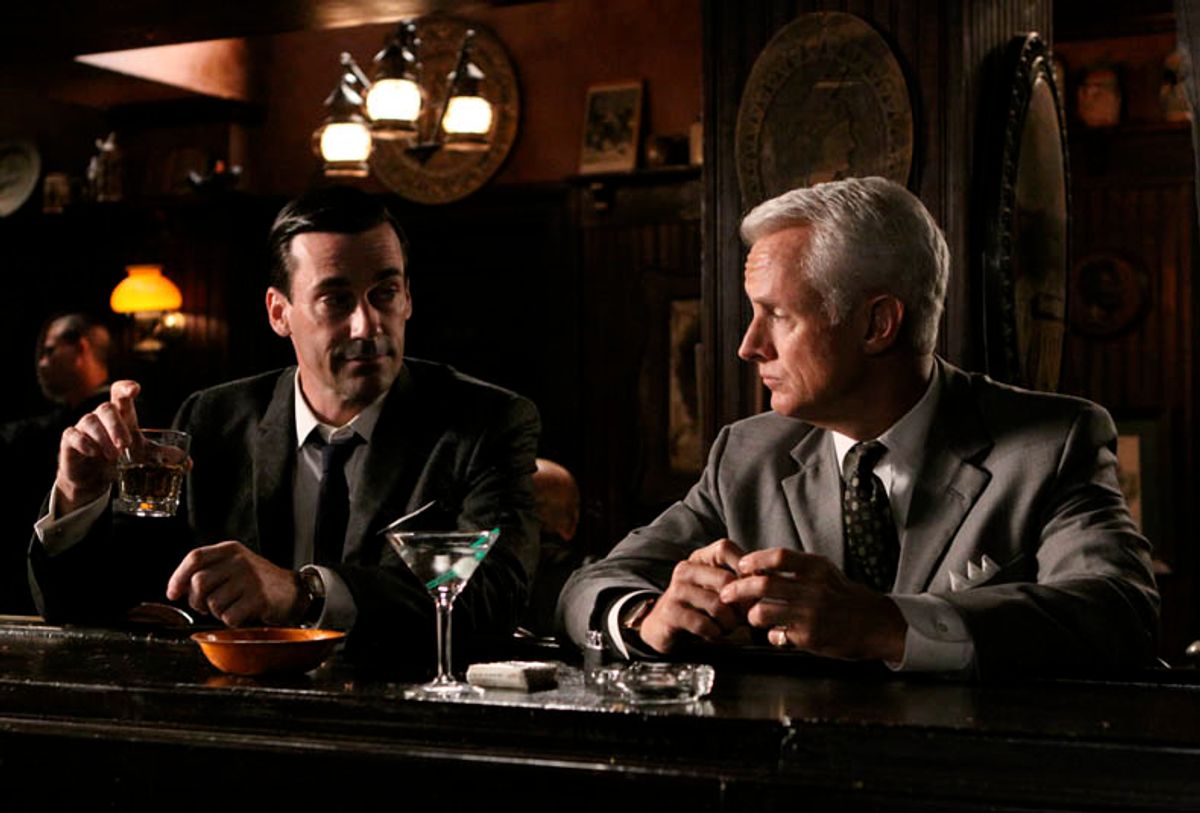 It looks like Don Draper might finally grow up after all! Instead of running for the hills at the first sign of trouble as is his habit, Don discovered in Sunday night's third season finale of "Mad Men" that there are some things in his life that he has the conviction to fight for: the survival of Sterling Cooper in some new form. His friendship with Roger Sterling. His professional and personal relationship with Peggy Olson.

But Don (Jon Hamm) also discovered there are things he's no longer interested in fighting for -- namely, his marriage. After greeting the news that Betty (January Jones) wants a divorce in his usual condescending way ("Maybe you can see a doctor -- a good one this time," he tells her as she grimaces at his arrogance), then shifting into angry drunk mode when he finds out about Betty's new caretaker/husband/father figure Henry Francis (Christopher Stanley), Don finally lands in even-handed territory.

"Listen, Betts. I want you to know I'm not gonna fight you. I hope you get what you always wanted," he tells her in a phone call at the end of the episode.

"You will always be their father," Betty replies -- typical tone-deaf Betty, unable to express her emotions in the slightest, and preoccupied with patriarchs to the end.

But Don always wanted more than a good, obedient, perfectly coifed wifey at home, as evidenced by his far less groomed, more spirited love interests elsewhere, from Midge (Rosemarie DeWitt) the devil-may-care intellectual to Suzanne (Abigail Spencer), the pure-hearted but unorthodox schoolteacher. Even as Betty and then Peggy (Elisabeth Moss) dress Don down with their unforgiving words, he almost seems to lean into their disapproval, as if he's relieved that finally someone's going to call him to the carpet for his clumsy, caddish behavior. Maybe he realizes he's been as much of a presumptuous asshole as Conrad Hilton, who cast aside his professional and personal relationship with Don the second he was no longer useful. Still, Hilton may be the one whose past keeps him overworked and friendless indefinitely; Don's days of lamenting his tragic upbringing are drawing to a close. The flashback to his father's death seems to signal that Don is finally going to put his daddy issues aside and shake off the shadow of his real identity once and for all. Now that his fake life is crumbling around him, something resembling an authentic life seems possible at last.

In fact, Sunday night's finale was particularly satisfying because all of the show's best characters look poised to move on to a new era in their lives. Peggy was clearly overjoyed to finally be acknowledged as talented and valuable by Don. Pete (Vincent Kartheiser) for once found himself perfectly positioned, thanks to his exit strategy of gathering clients to take to another firm, to get the promotion he'd always dreamed of. Joan (Christina Hendricks) came alive again when she was called back into action as the new firm's office manager, returning to a role that exploits her remarkable knack for attention to detail, propriety, pragmatism and pretty much everything that the partners and associates of the new firm so dearly lack. Even Lane Pryce (Jared Harris) found himself unexpectedly handed a chance to avenge his heartless bosses in London with the same air of casual cheer they'd employed when dragging him over the coals for years.

Breathtaking, really, that each character's deepest desires and drives could be satisfied without screwing up the story or turning it into a fairy tale. In particular, the difference between Peggy and Joan and what they each want was beautifully expressed in seconds: Roger, Joan and Peggy are hunched over the books at the old offices, exhausted from their scrambling attempts to bring as much with them to the new firm as they can before they're locked out, when Sterling asks, "Peggy, can you get me some coffee?" Without wavering, Peggy snaps back, "No."

Next we cut to Don informing Joan, "I'm at the Roosevelt, but I'll need you to find me an apartment."

"Furnished?" Joan asks without skipping a beat, in that tone of professional nonchalance that makes her such a star. Sure, Joan's made to be a caretaker and organizer of men's lives, but does that make her miserable? No. She absolutely glows when she's s given an opportunity to do what she does best.

Even the Draper kids look reasonably happy camped out on the couch in front of the TV set with big glasses of chocolate milk, the housekeeper (who's far more nurturing than their own mother, after all) perched between them. The only character whose fate feels slightly tragic is Betty. How heartbreaking was that shot of her on the plane to Reno, holding her little, worried-looking baby as Henry Francis snoozed in the seat beside them? Now Betty has the dull life and the dull Daddy of her dreams, and not surprisingly, there she is, looking as hopelessly alone as ever. (And really, someone should give that baby an Emmy for encapsulating the angst of that scene in his poor little face. Another boy goes barreling off into an unknown future with a dad who's not his own. Is Francis even a good guy? Who knows?)

Although his baby's plight echoes his own sad past, Don's future looks far less bleak than it has in a long time. As he returns from his last phone call with Betty, what does he see? The chaotic, cramped temporary offices of Sterling Cooper Draper Pryce, filled with the people who have always been his true family, for better or for worse.