The fall of the Berlin Wall, 9/11 and the collapse of Lehman Brothers: Each ushered in a new American era 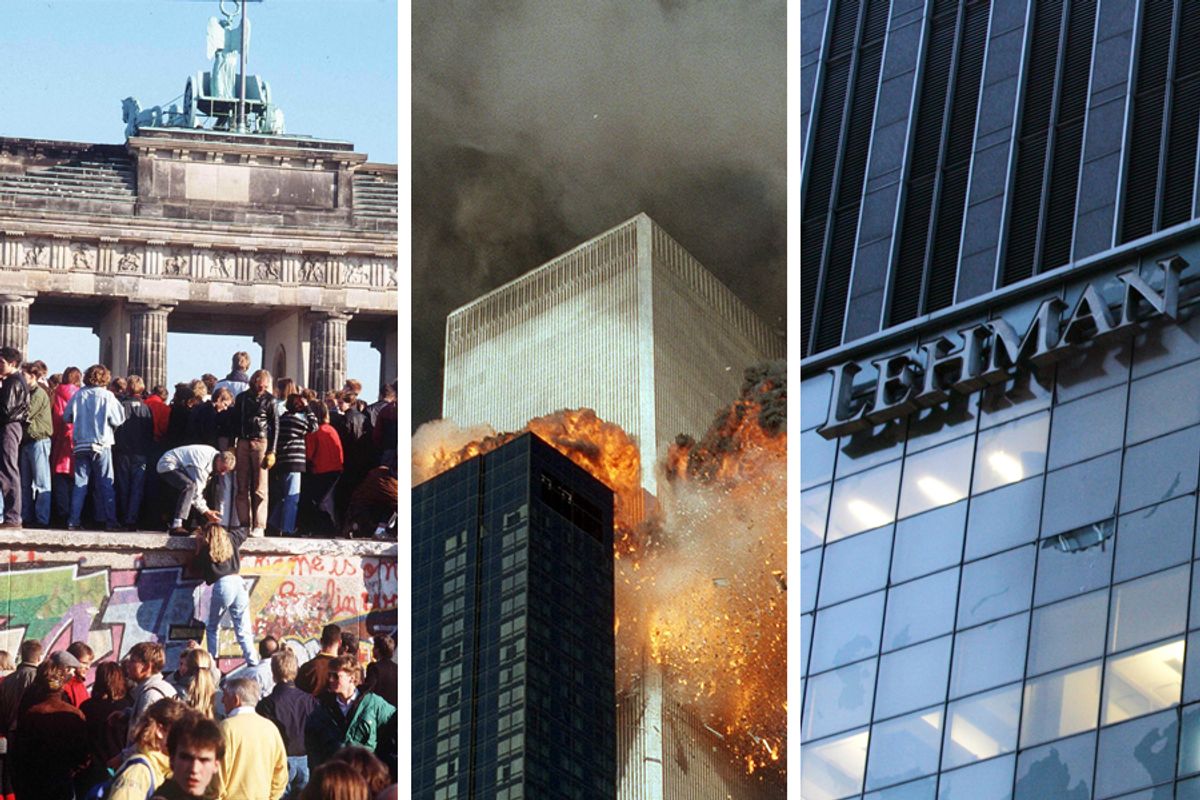 Three calendar dates. Three anniversaries. Three eras in the history of the United States and the world.

Monday marks the 20th anniversary of the fall of the Berlin Wall. On Nov. 9, 1989, the Communist dictatorship in East Germany, following weeks of protests, allowed the citizens of East Berlin to enter West Berlin. Ever since its construction began in 1961, the wall had symbolized the division not only of Germany but of Europe as a whole between the dreary, tyrannical Soviet bloc and the imperfectly democratic and vibrant West. Over the decades several hundred East Germans had been slaughtered by their own government as they tried to escape to freedom in the West. Now, on the night of Nov. 9, jubilant crowds streamed through the wall, and East Germans and West Germans collaborated to begin to tear the monstrous edifice down. The liberation of Eastern Europe from the Red Army and the reunification of Germany, the dissolution of the Soviet Union and the final collapse of belief in the secular religion of Marxism-Leninism, even in nominally communist countries like China, Cuba, North Korea and Vietnam, quickly followed.

On Sept. 11, 2001, radical Islamists hijacked jets as part of a conspiracy orchestrated by Osama bin Laden and his al-Qaida network. To the horror of a world watching on television, two jets crashed into the iconic twin towers of the World Trade Center, capsizing them and killing around 3,000 victims. Another jet crashed into the Pentagon, while a fourth, headed for Washington, plunged to destruction in a field in Pennsylvania, after passengers overpowered the terrorists. The U.S. invasions of Afghanistan, whose Taliban regime had hosted al-Qaida, and Iraq, which had nothing to do with the attacks on the U.S., quickly followed.

On Sept. 15, 2008, Lehman Brothers filed for bankruptcy. As news spread of the collapse of America's fifth-largest investment bank, credit markets froze and the Dow Jones industrial average plunged more than 500 points. In the next few weeks, the stock market quickly erased a decade's worth of gains. Waves of bank failures and business failures and mass unemployment, from North America to Europe to Asia, marked the greatest global financial crisis since the Great Depression of the 1930s.

11/9. 9/11. 9/15. These three dates divide three eras in recent history: the Age of Euphoria, the Age of Paranoia, and the Age of Disillusionment.

The Age of Euphoria lasted from the fall of the Berlin Wall to the fall of the twin towers. In Washington, the fall of the Soviet Union was misinterpreted as the rise of the United States. The Gulf War of 1991 seemed to ratify American hubris. Using advanced technology designed to defeat the Soviet Union, the U.S. military quickly demolished the armed forces of Saddam Hussein's feeble regime. It was said that the world had gone from being bipolar to unipolar, that no force since Rome had been as powerful as America and its legions.

This was absurd hyperbole, of course. It was true that the U.S. was the only great power with power projection capabilities that permitted it to defeat weak states on the Eurasian periphery like Iraq, Serbia and Afghanistan. But America's unmatched abilities in the new colonial warfare hardly gave it hegemony over Europe or Asia. The U.S. military budget was strained nearly to bankruptcy merely by the cost of fighting low-level wars against primitive opponents in Iraq and Afghanistan. Some solitary superpower.

The other great powers chose not to compete with the "New Rome" because they had better things to do with their wealth. The Europeans slashed their military spending after the Cold War to pay for welfare and amenities for their people. The Chinese, having discarded communism in practice, threw their energies into building up a world-class industrial base. If Americans insisted on sacrificing American blood and American treasure to protect oil destined mostly for Europe and East Asia rather than the U.S., well, the Europeans and East Asians were not going to object.

Following the second pivotal date, 9/11, America's euphoria gave way to paranoia. Before the al-Qaida terrorists hijacked the planes, America was widely thought to be the greatest superpower the world had ever seen. Following the attacks, suddenly Americans saw themselves as weak, pathetic and about to be destroyed by a handful of stateless criminals. The response to the 9/11 attacks should have been a tough refusal to be panicked by acts of mass murder. Instead, bin Laden and his allies succeeded in provoking the panic and overreaction that they sought.

The Bush administration and Republican conservatives, having lost the national security wedge issue following the Cold War, realized that they could get it back. The American right, which had been boasting of how powerful America was, now warned of how weak and vulnerable the nation had become. Color-coded "terrorist threat" alerts from the new Department of Homeland Security stoked a pervasive feeling of anxiety. The possibility that Saddam Hussein might develop nuclear weapons and give them to al-Qaida to be used to destroy American cities -- a possibility that was remote to the point of absurdity -- was employed by the Bush administration to justify an invasion and occupation of Iraq, the actual strategic purpose of which remains debated to this day.

The threat of al-Qaida, though exaggerated, was and is genuine; witness the later, small-scale terrorist attacks in Madrid, London and Glasgow, as well as a series of plots to destroy airliners that vigilant authorities in the U.S. and other countries managed to thwart. And the recent atrocity at Fort Hood in Texas may have been motivated in part by jihadist ideology. But despite the best efforts of conservative politicians and ideologues to frighten the American people, it has proved to be impossible to sustain a high level of public anxiety for a prolonged period. The public mood changed in a national burst of laughter in February 2003, when Department of Homeland Security director Tom Ridge urged citizens to amass duct tape in order to seal their windows as a precaution against anthrax or gas attacks. The spell was broken. America relaxed. George W. Bush was narrowly reelected as a wartime president in 2004, but by 2006 the electorate no longer saw the connection between the costly war in Iraq and their own security and threw the Republican Party out of both houses of Congress.

The Age of Paranoia came to a final end with the global economic collapse that began on Sept. 15, 2008. The subject changed from the threat of terrorists with atomic bombs to the threat of bankers with financial bombs, in the form of unexploded "toxic assets" with strange names like credit default swaps and over-the-counter derivatives. There was a brief upsurge in optimism, when a young, vigorous, mixed-race senator named Barack Obama was elected president of the United States. With Democrats in control of the White House as well as Congress, many assumed that an era of sweeping change was about to begin.

But Obama soon proved to be a cautious incrementalist, not a bold reformer. He froze out innovative thinkers and assembled an economic team dominated by center-right Democrats, including some like Larry Summers who had helped to make the crisis possible by supporting the deregulation of American and global finance in the 1990s. Obama's Treasury secretary, Tim Geithner, said no to all proposals for serious restructuring of the financial industry that might upset investment banks and hedge funds. Every major idea for financial reform -- from forcing investment banks into insolvency and nationalizing them temporarily to restoring the Glass-Steagall separation of retail banking from casino finance and cracking down on offshore tax havens to imposing a "Tobin tax" on financial transactions -- was rejected as too radical by the best friends in the White House that Wall Street has ever had. By the fall of 2009, according to press reports Paul Volcker was considered too radical to be taken seriously by the Obama administration. Paul Volcker.

In other areas, Obama was just as timid and deferential toward the organized business lobbies who had helped cause the problems he claimed to be trying to solve. He appeased pharmaceutical companies as part of an effort to push a health reform plan that was too feeble to be truly "historic." In the name of combating climate change, Obama and the Democrats pushed a complicated cap-and-trade system that invited manipulation by industry lobbyists and Wall Street investors. In every area, the Democrats rejected bold, deep reforms in favor of incremental changes that would not upset Wall Street and other industries that showered Obama and Democrats in Congress with contributions.

It has gradually dawned on Americans that the dynamic leadership that the times require is not to be found -- not on the right, caught up in a cultish Ghost Dance movement that conflates center-right Democrats with Nazis and Communists and King George, as enemies of the people, and not in the incrementalist, lobby-dominated Democratic Party of Obama, Pelosi and Reid. Popular rage is surprisingly limited. The mood overall is one of disillusionment and demoralization, like that of the American people during the Hoover years rather than after Franklin Roosevelt's inauguration.