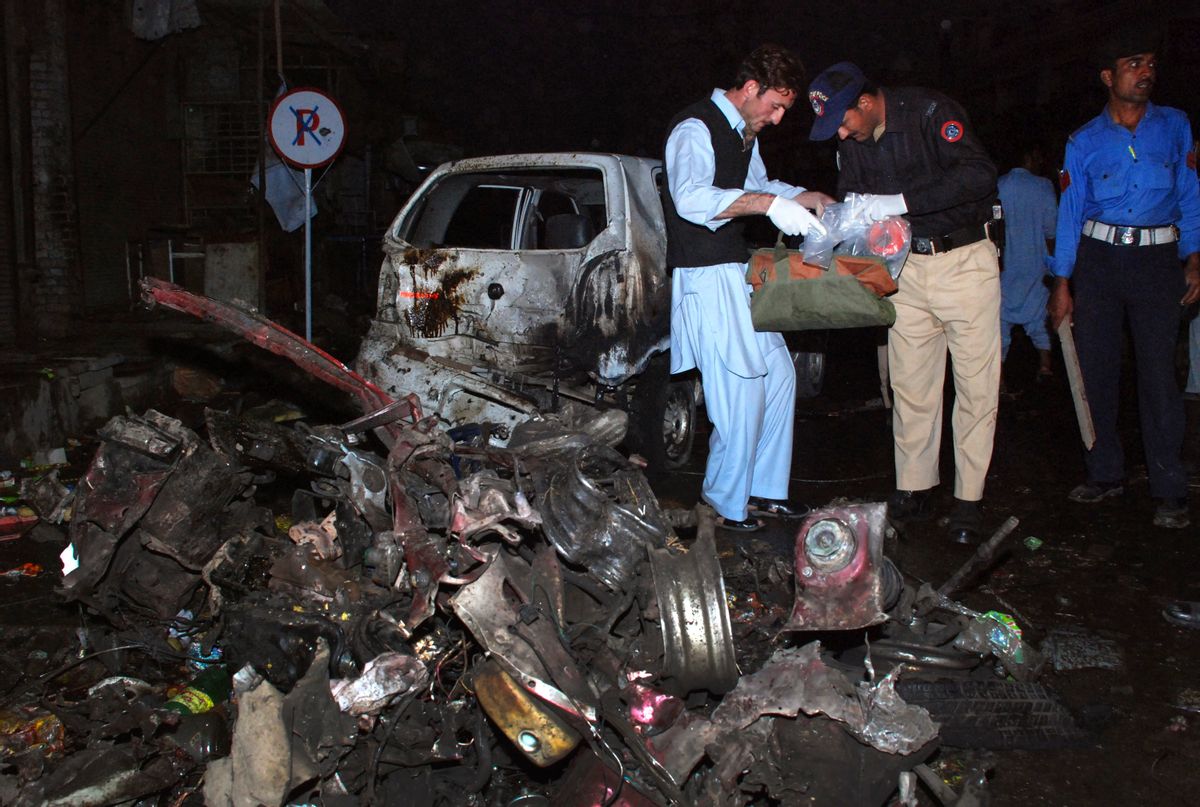 Police officials survey the site of a suicide bomb explosion in Charsadda, located about 20 km (12 miles) northeast of Peshawar November 10, 2009. Pakistani Taliban militants vowed to fight a tough, protracted guerrilla war against the army on Tuesday as a suicide car-bomber killed up to 20 people in a northwestern town, police said. A suicide bomber in a car set off explosives in a square in the centre of Charsadda killing up to 20 people and wounding at least 30, town police chief Riaz Khan said. REUTERS/K Parvez (PAKISTAN CONFLICT) (Reuters)
--

A suicide bomber detonated his payload in a market in Charsadda, a half hour drive northeast of Peshawar in Pakistan's North-West Frontier Province. The Los Angeles Times quotes Prime Minister Yousuf Reza Gilani saying that the bombing was a desperate response to the success of the Pakistani army's campaign against the Pakistani Taliban in South Waziristan.

The violence also has a local political significance. In the February 2008 parliamentary elections, the Awami National Party, a secular Pashtun party, became very popular and won the province. In the run-up to that victory, in January, 2008, hard line devotees of political Islam set off a bomb at an ANP rally in Charsadda that killed 20 persons. From 2003 until 2008, the North-West Frontier Province was ruled by the United Action Council (Urdu acronym MMA), a coalition of 6 small fundamentalist parties that included at least one party close to the Taliban, despite its willingness to sit on parliament under Gen. Pervez Musharraf.

The fundamentalists resent having been displaced by the secular Pashtun sub-nationalist ANP, and this bombing of Charsadda is probably a further piece of thuggery aimed at punishing the Pashtuns for voting secular. Asfandiyar Wali Khan, the president of the Awami National Party, and other high provincial officials condemned the attack. Wali Khan said, "These barbaric elements have no religion and faith. The government is determined to eliminate terrorism and our struggle will continue."

Such violence is often read in the West as a confirmation of the bigoted view that Muslims in general are unusually violent. Even in Pakistan, it is read as a sign of alleged Pashtun tendencies to violence and barbarism. In fact, a bombing like that in Charsadda is part of a low-intensity, drawn-out civil war among the Pashtuns themselves, with a small rural radical fringe targetting urban, ideologically moderate groups and institutions.

In fact, the Awami National Party has its origins in Pashtun support for Mahatma Gandhi's nonviolent campaign for independence from the British; that is, it began as a pacifist party. The idea of pacifist Pashtuns is so preposterous in today's atmosphere of anti-Pashtun prejudice that it is typically missing from journalistic accounts of politics in the NWFP.

Meanwhile, the fighting in South Waziristan continues, with Pakistan claiming to have killed 12 militants on Tuesday.