Rahm Emanuel and other White House officials are talking up "debt reduction." Let's hope they're not serious 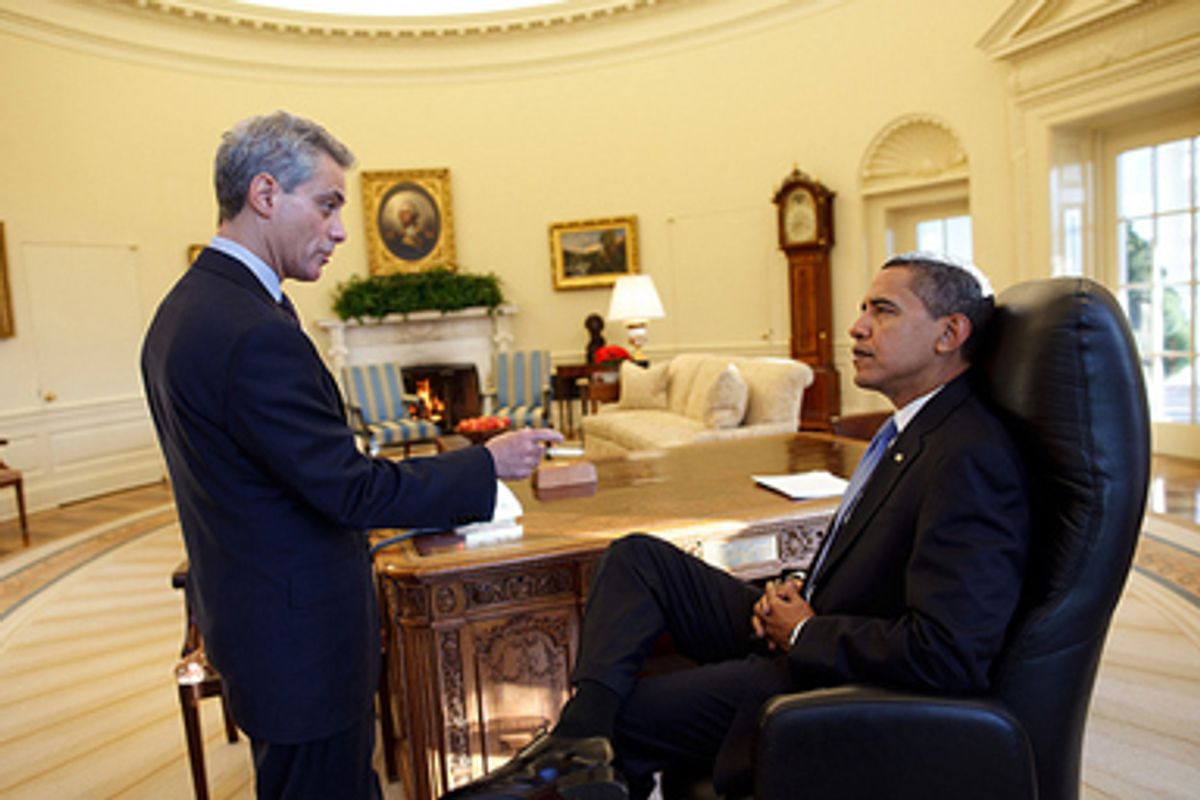 President Obama meets with chief of staff Rahm Emanuel on his first day in office.
--

Don't look now, but the ghost of Herbert Hoover is haunting the White House. Deficit reduction is back on the agenda, and the timing couldn't possibly be worse -- unless Obama gets very, very lucky.

The Wall Street Journal is reporting that the White House has suddenly decided to make debt reduction a priority:

The Office of Management and Budget has asked all cabinet agencies, except defense and veterans affairs, to prepare two budget proposals for fiscal 2011, which begins Oct 1, 2010. One would freeze spending at current levels. The other would cut spending by 5 percent."

White House Chief of Staff Rahm Emanuel is reportedly on the warpath seeking spending cuts, and the administration may even be planning to apply unspent TARP money directly to paying down the deficit.

What a difference an off-year election makes! For months, we've heard a consistent refrain from Obama's economic brain trust: Under no circumstances should we repeat the mistake made in 1937 by Franklin Roosevelt, who, feeling political pressure to balance the budget, cut spending and short-circuited a nascent recovery from the Great Depression. The downside risks to the economy are still too great, warned the advisors. If we throttle back on stimulative fiscal policy, we could easily precipitate a double-dip recession. What's more, the Treasury has had little problem auctioning off unprecedented amounts of debt, suggesting that bond market investors just aren't very concerned about the deficit right now.

But hardly a week after Democratic gubernatorial losses in New Jersey and Virginia, along with some troubling poll numbers indicating GOP attacks on big-spending government are beginning to stick with voters, the administration is suddenly considering across-the-board 5 percent budget cuts.

But guess what? The downside risks to the economy are still great. Unemployment is still rising. The full impact of the implosion of the commercial real estate sector has yet to be felt. Much of what is encouraging in the third-quarter GDP growth statistics can be directly attributed to stimulus spending and such one-trick-ponies as the Cash-for-Clunkers program and a huge first-time home-buyer tax credit. Oil prices are rising. State budgets are cracking under the pressure all across the country. Banks aren't lending. Wal-Mart is apprehensive about holiday sales.

It isn't as if the White House doesn't know any of this. Just last Friday, President Obama, prodded by 10.2 percent unemployment, signed into law deficit increasing extensions of the home-buyer tax credit and unemployment benefits.

The administration is constrained in tackling the mounting deficit, since raising taxes or slashing spending could stunt economic growth. Administration officials say the Obama economic team is especially concerned that rapid deficit reduction could hurt the economy.

But a 5 percent across-the-board spending cut, by definition, would be an anti-stimulative measure. Even a spending freeze runs the risk of backfiring. Astonishing as it may seem, the Republican Party, thrashed in two consecutive major national elections and miles away from a majority in either the House or the Senate, is still running the country.

The most optimistic interpretation of the new emphasis on deficit reduction is that it is all just rhetoric. By the time the next fiscal year starts, in October 2010, the political implications of Obama's economic management will be a done deal, at least as far as the midterm elections are concerned. Democratic fortunes will hinge on whether the economy is experiencing a sustained recovery, and not on what the budget projections for the 2011 fiscal year. If unemployment has started to decline appreciably a year from now, it's possible that turning government attention to deficit reduction could be feasible. By talking about it now, the administration is merely trying to limit the political fallout from the GOP tax-and-spend drumbeat.

So maybe Obama gets lucky, and the economy recovers strongly enough to give the administration more options. Rising tax revenue spurred by a growing economy would automatically qualify as "debt reduction." But it's a gamble. If unemployment keeps rising throughout 2010, and the economy loses its current momentum and slides back into recession, then it really doesn't matter what the Obama administration is promising to do today about spending priorities a year from now. Because 12, 13 or 14 percent unemployment will demand extreme government attention, balanced budget or no balanced budget. And if the GOP comes back into power in Congress on the back of a bad economy in 2010, and then attempts to cut government spending all by its lonesome, its hold on power after 2012 might turn out to be just as fragile as the current Democratic majority's seems to be.