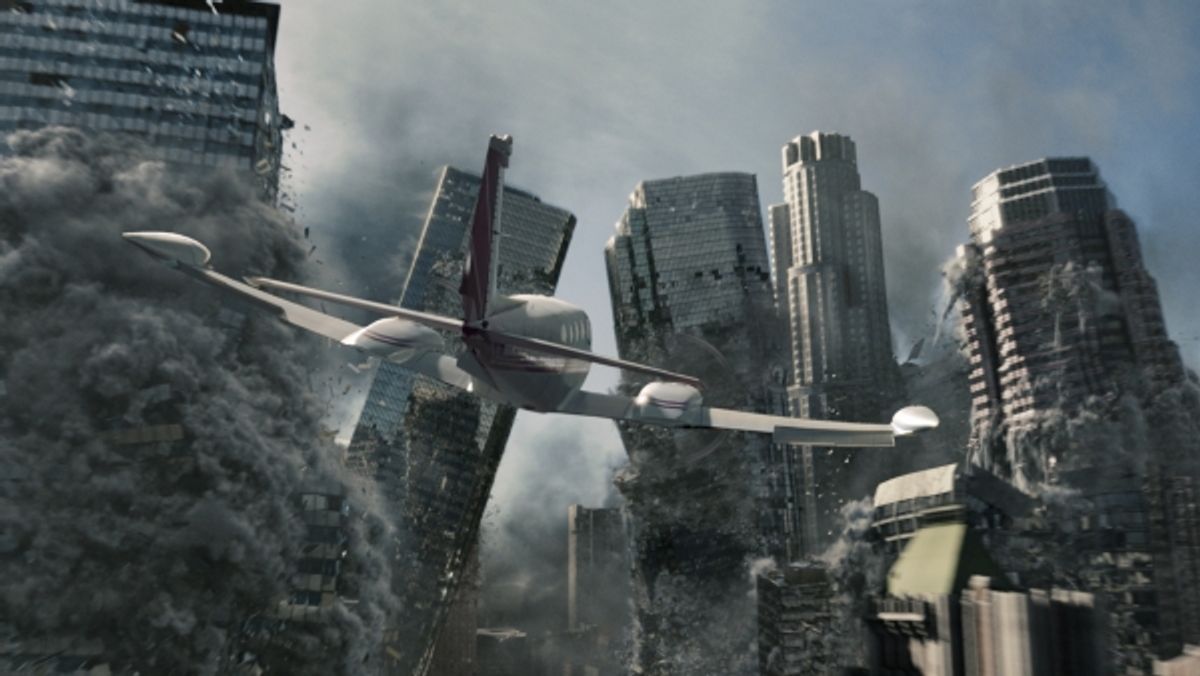 Roland Emmerich's latest disaster jamboree, "2012," may be the first movie to have been inspired, at least indirectly, by the teachings of Mother Angelica. Before the release of Martin Scorsese's "The Last Temptation of Christ," Mother A., the carved-apple-face puppet of the far Catholic right's EWTN (Eternal World Television Network), warned what would happen if that movie found its way into theaters: "Caleefornia's gonna break off and fall into the ocean!"

And by golly, it may have taken a few years, but in Emmerich's vision, she was right. "2012," which takes place in the very year designated by the Mayans and a bunch of other ancient folk as the one in which the world will end, is a virtual field day of destruction: The streets of Los Angeles buckle into shardlike ribbons before falling off the face of the earth altogether, carrying all those godless dealmakers and cellphone-talkers with it. St. Peter's Basilica cracks and shatters like a Wal-Mart Christmas bauble hit with a hammer. Brazil's Christ the Redeemer statue unceremoniously breaks into chunks and falls to the ground -- not even Jesus himself is any match for the massive shifting of the earth's crust that has occurred because the sun suddenly just got too goddamn hot.

That's how Emmerich (who co-wrote the movie's script with Harald Kloser) more or less explains the true scientific facts of the world's last days. First come the earthquakes, followed by volcanic eruptions and tsunamis. The South Pole creeps up, like a bad pair of low-rise jeans, to somewhere around Chicago. Everyone is confused and everything is chaotic. But the U.S. government, having been warned by a noble and handsome astrophysigeologist (played by Chiwetel Ejiofor) that some mighty bad stuff is coming soon, has joined with other major world powers to hatch a plan: Their scheme will save bigwig heads of state, rich people and a couple of sets of zoo animals. The poor, as well as the merely average, will be left outside the proverbial gates, with nothing to do but reflect on the major bummer that's about to befall them.

"2012" is many things: a civics lesson, a reflection on the way mismatched, extended families can actually function quite well when everyone makes an effort to get along, an admonition that we'd all better be good for goodness' sake. But above all, it's a representation of how all of us human beings are, amazingly enough, connected -- because somehow Emmerich has worked it so that everyone in "2012" knows everyone else: John Cusack is a failed novelist and divorced dad who makes ends meet by driving a car for Russian fat cat Zlatko Buric, who happens to have spent a few of his billions on one of those expensive end-of-the-world escape tickets. Cusack's ex-wife, Amanda Peet, has taken up with plastic surgeon Tom McCarthy, whom Cusack doesn't like much but whose amateur pilot skills sure end up coming in handy. Ejiofor reports directly to the president of the United States (Danny Glover), and happens to notice that his daughter (Thandie Newton) is pretty cute. It turns out that Ejiofor's dad once gave him a copy of Cusack's book -- Ejiofor discovers this when he happens to meet Cusack, vacationing, pre-apocalypse, with his kids in Yellowstone Park. That's also where, incidentally, Cusack makes the acquaintance of end-of-the-world nut Woody Harrelson, who gleefully celebrates his last moments on earth by flashing a giant plumber's crack. Huzzah!

Perhaps the finest moment in the multiple interlocking coincidences that make up "2012" is the one in which, after most of the earth as we know it has been destroyed, Ejiofor reencounters Cusack in a part of the world that used to be China and shouts excitedly, "Remember me? We met in Yellowstone Park!" But let's not get ahead of ourselves: "2012" is totally, certifiably nuts, without being quite as off-the-wall kitschy as Emmerich's last special-effects extravabanzoo, "10,000 BC." Also, Emmerich's grasp of science appears to have made great leaps in sophistication -- relatively speaking -- since he so gamely suggested, in "The Day After Tomorrow," that hiding out in the New York Public Library is the best way to ride out the deadly effects of global climate change.

There are some moments of mild sadism in "2012," like the one in which a crowd of Indian refugees (including one of the movie's many ill-used actors, Jimi Mistri) cower in fear before being washed away by one of those tsunamis. But if "2012" isn't exactly cheerful, at least it doesn't have the sweaty, mean-spirited sheen of, say, Steven Spielberg's "War of the Worlds." And the effects are expensive-looking and impressive enough while you're watching them, although whatever awe they inspire doesn't last long: When you've seen one Washington Monument fall to bits, you've seen them all.

The movie's most spectacular special effect is an actor. As far as I can recall, Ejiofor has never given a bad performance, although near the end of "2012" Emmerich, surely unwittingly, challenges that record by saddling him with an overwrought and overwritten speech about how necessary it is for human beings to treat one another with kindness and compassion -- otherwise, why save the human race at all? Ejiofor delivers this tin-can dialogue, which probably took Emmerich all of 12 minutes to write between bites of sandwich and phone calls to his agent, as if it were the St. Crispin's Day speech: With his perfect and yet wholly human enunciation, he turns a few dumb words into a tone poem of deep emotion and conviction. I leaned forward in my seat, gladly buying every syllable of this godforsaken baloney and then, when it was over, wishing there were more. The Rockies may tumble, Gibraltar may crumble, but Ejiofor, thank God, is here to stay.