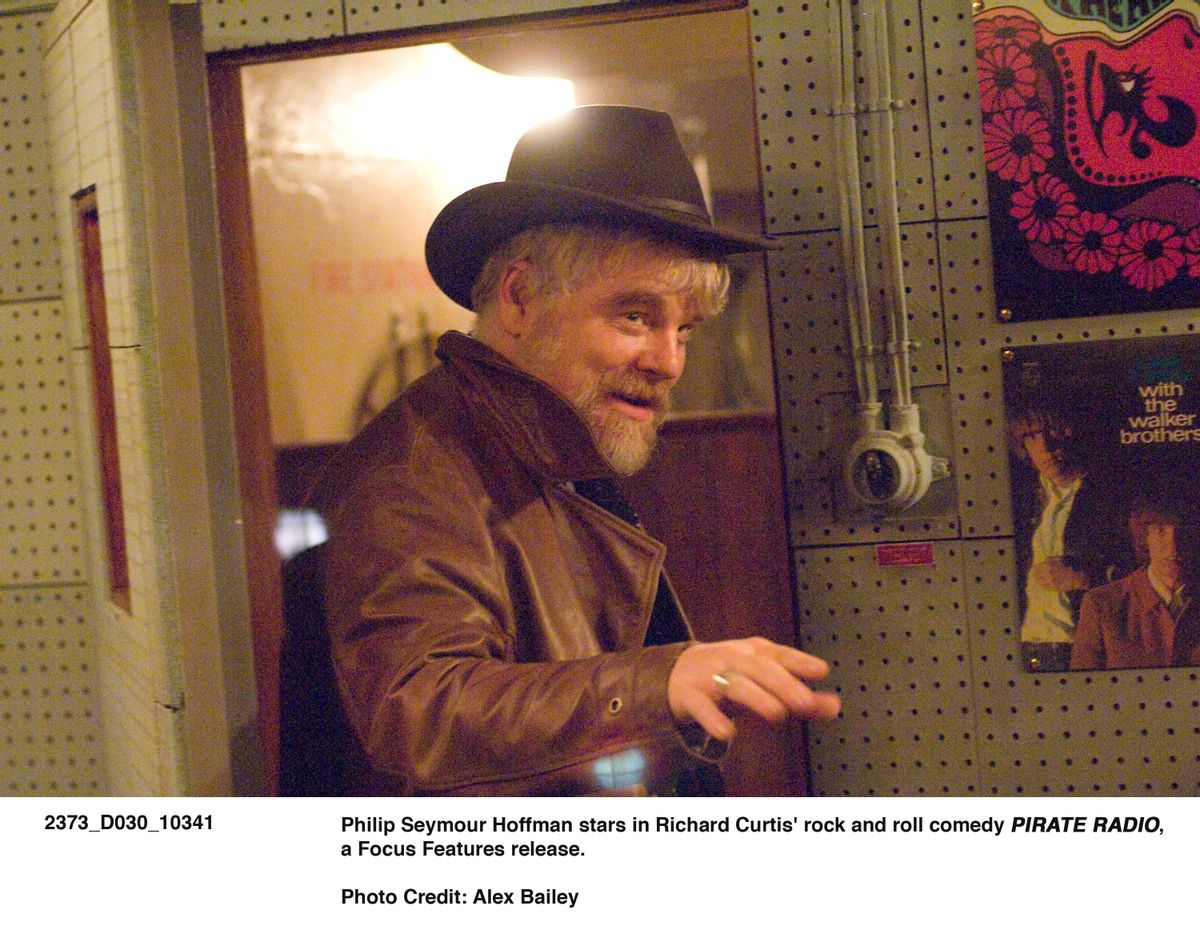 There are moments in Richard Curtis' rambling ensemble comedy "Pirate Radio" that are so exuberant they're almost enough to carry you past the movie's considerable rough spots. The picture -- whose setup, at least, is based on fact -- takes place in 1966, on a refurbished tanker anchored in the North Sea, off the coast of England, that serves as a floating radio station. At the time -- smack in the middle of the glory days of the Beatles, the Rolling Stones, the Who and the Kinks -- the BBC was broadcasting barely two hours of rock 'n' roll each week. Enterprising DJs responded by setting up shop on vessels stationed just outside of U.K. territorial waters, broadcasting whatever music they fancied around the clock, to the delight of English kids and to the government's dismay.

Curtis -- the writer of "Four Weddings and a Funeral" and "Notting Hill," and the writer-director of "Love Actually" -- uses this short-lived era (by 1968, the BBC had changed its programming policy, although pirate radio stations continued to thrive in various forms) as the backdrop for an intensely fictionalized story about a bunch of DJs who happily, and sometimes not-so-happily, live together on a big boat, working out various professional and romantic rivalries and, in between, playing a little music. Bill Nighy is Quentin, the randy, erudite and obviously wealthy benefactor of the radio operation stationed on his ship. His teenage godson, Carl (Tom Sturridge), has been packed off by his mother to spend some time on the boat, where he's at first teased, hazed or, worst of all, ignored by the DJs who live and work there. They include the Count (Philip Seymour Hoffman, in a relaxed, enjoyable performance), an American who's found his niche among the Britons but who feels threatened by the station's star DJ Gavin (Rhys Ifans), a sex god who swans about bedecked in feathers and Brian Jones-style velvet jackets. The rest of the crew consists of other DJs too numerous to list, and their personalities are barely defined enough to survive the movie's duration: There's pudgy ladies' man Dave (Nick Frost), the innocently asexual Simon (Chris O'Dowd), and stalwart news reporter News John (Will Adamsdale). Meanwhile, stiff bureaucrat Sir Alistair Dormandy (played, amusingly enough, by Kenneth Branaugh) does his damnedest to try to close the whole operation down.

Writer-director Curtis' convoluted, overpacked story suffers from a malady I like to call Love Actually-itis: He starts by introducing characters and conflicts only to drop them. Then, usually after you've stopped caring, he resurrects and resolves those conflicts, but only halfheartedly, before moving on all too cheerfully to something else. Despite Curtis' bumbling, "Pirate Radio" manages to stay afloat bravely enough -- at least until the climax, which comes off as a confused marriage between "Top of the Pops" and "Titanic."

Fortunately, Curtis isn't completely tone-deaf, and he does manage to capture the mood, and certainly the sound, of the era. The best parts of "Pirate Radio" take place in the movie's margins, in the vignettes and asides that don't necessarily have much to do with the plot. In one sequence, a boatload of giggling, waving, miniskirted girls come to the station for some Saturday fun: The DJs watch their approach with the nervous, horny anxiety of cartoon bridegrooms. The picture is dotted with sequences that show, briefly and succinctly, what rock 'n' roll radio meant to young English kids at the time: Curtis shows youngsters tuning in at bedtime before hiding their glowing transistors under their pillows, or a group of young nurses huddled around a radio during their break time. The music -- which includes some of the usual suspects previously mentioned, as well as killers like Dusty Springfield's "You Don't Have to Say You Love Me" and frothy diversions like the Turtles' "You Know She'd Rather Be with Me" -- is used intelligently and deftly. And Curtis knows he has a valuable secret weapon in Bill Nighy, who looks super in his wardrobe of trim striped stovepipe trousers and modder-than-mod double-breasted jackets. Late in the movie, we get to see him dancing to "My Generation." The guy does a mean mashed-potato, and it takes no imagination whatsoever to see what he must have looked like on the dance floor circa 1966. If you're looking for proof of the youth-preserving properties of rock 'n' roll, Nighy is your man.