The surprising charms of the week's most talked-about political memoir 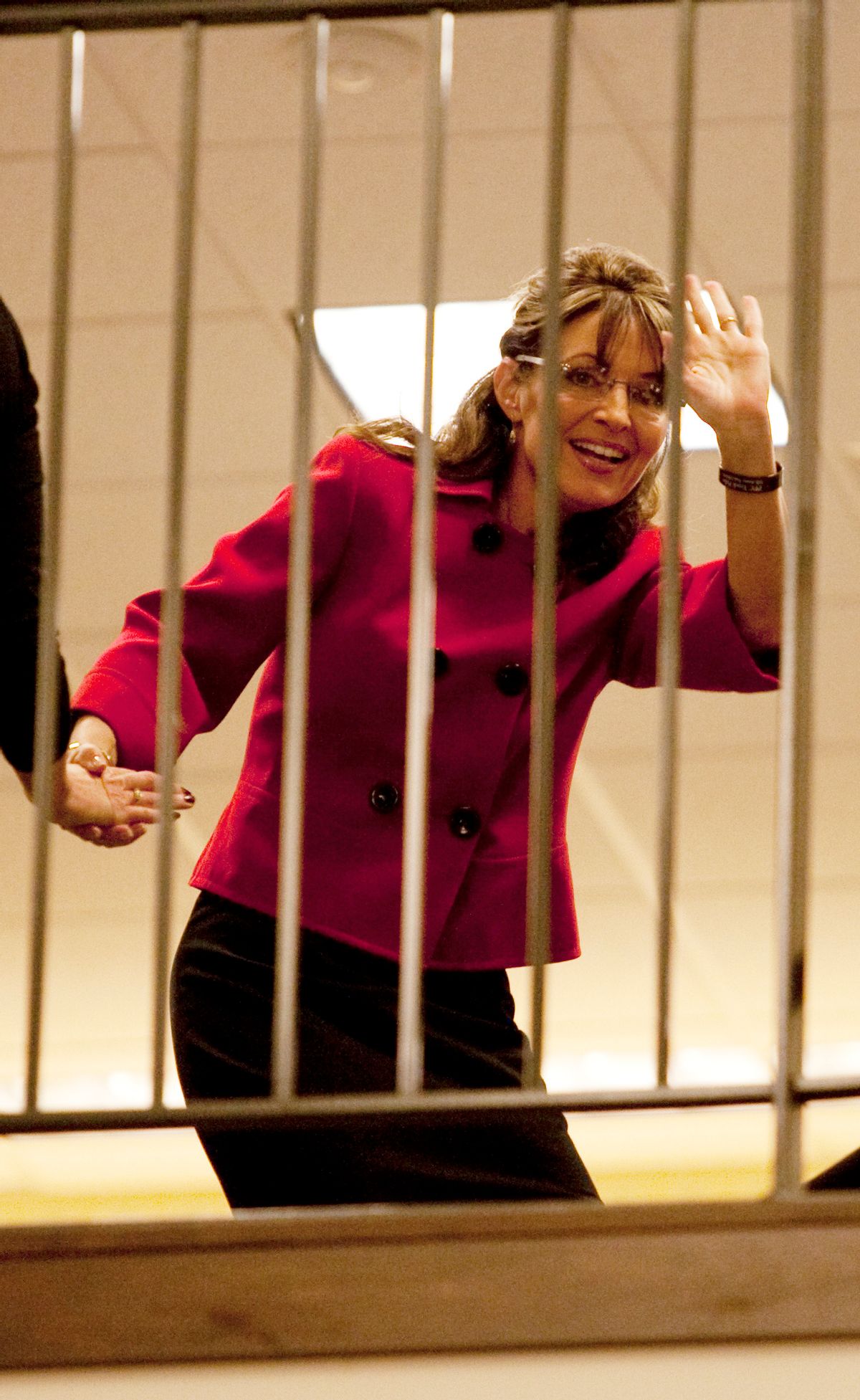 Sarah Palin waves to fans before an autograph session during the first stop of her book tour in Grand Rapids, Mich on Wednesday, November 18, 2009. (AP Photo/Adam Bird) (Adam Bird)
--

Now hold your horses, you snarky, lefty, NPR-listening, New York Times-subscribing readers of Salon. I haven't jumped ship to declare Sarah Palin herself "great." I'm from California, after all; I am not a creationist, I am not pro-life, I have never shot a moose. Nor is my culinary specialty an Alaskan dish called "moose chili." Here on the Left Coast, along with our hummus, we prefer "turkey chili," which is perhaps less gamey and lower in fat but in the end, I ask you, is it really more humane? (Who killed the turkey? Was it a person or a corporation? This Trader Joe's we speak of -- is he union? Is his name actually "Joe"? And what is his relation to Big Oil's manipulation of the rising price of Bristol Bay canned fishery salmon to 27 cents a pound?) These are the complexities one ponders at night while falling asleep under the gristly if at times oddly tasty caribou stew that is Sarah Palin's new 400-plus-page memoir.

If I am giving Palin's book a thumbs up, it is qualified by the fact that, let's face it, the genre of the female political autobiography is itself in its infancy. It's like some 53rd state, housing at this moment in time only a handful of crude, wooden, lean-to outposts. These are times when former Secretary of State Madeleine Albright can do a book tour based on her pins and brooches, about which "Morning Edition's" Susan Stamberg will huskily midwife a most empathic and unironic discussion. These are times when Nancy Pelosi comes out with a memoir slender as a Hallmark card, a memoir no living person but me has apparently read, vaguely titled "Know Your Power: A Message to America's Daughters," which her publishers carefully deemed ("How shall we describe this?") a "keepsake." Then again, one understands why female political books tend toward focus group-approved mottos and tasteful brooches -- women have not been in politics for very long and, even more than the men in this rabid age, if they dare utter an opinion or take a stand, they and, weirdly, also their children get media-raped and shredded. (One curious triangulation in Palin's book is irritation with Obama's and Biden's relatively easy media rides coupled with unexpected sympathy for media-slogfested Hillary Clinton. Our bodies, ourselves! "Clinton-Palin in 2012!" Can you imagine? Neither can I.)

So what's refreshing is that Palin seems unafraid to express herself, warts and all -- informal campaign motto: "Heels on! Gloves off!" -- and the book just goes where it goes. Much has already been made of her freewheeling critiques, not just of Democrats but also of Republican Party insiders and McCain 2008 campaign managers, particularly in the gloomy waning days of the run. ("Schmidt leveled his eyes at me. 'We don't have the money Obama does and the numbers don't look good. We've got to change things up.' I AGREE. I was eager to hear a new strategy. 'So,' he continued, 'headquarters is flying in a nutritionist.'" Ba-dump-bump!) She is forthcoming enough about her personal failings. Belying her shellacked outer shell, more reminiscent to me of Anita Bryant than Tina Fey, Palin confesses a not-ready-for-prime-time horror at Trig's Down syndrome diagnosis and relates at least one fairly satisfying campaign trail fight with husband Todd. As opposed to Bush's post-Yale reinvention of himself as a Texas cowboy, Palin doesn't seem to be making this folksy stuff up. And really, who would want to? While courting Palin as a teen, Todd gave her "gold nugget earrings"; with only one phone line in the house, she and Todd yapped at night on their back porches on fishing boat radios, until they realized every commercial trucker trundling through town could hear them; the wedding rings were each $35, the post-nuptial dinner was at Wendy's. All this in the town of Wasilla, which, due to stratospheric sales of this particular product, Wal-Mart has deemed "the Duct Tape capital of the world."

In Palin's "Little House on the Tundra" (her own coinage), the very state of Alaska seems to have its own sound, its own language, its own quaint patois. There are so many more colorful sayings than that "pit bull with lipstick" quip! Things grow "faster than fireweed in July"; bench warming during sports games is known as "riding the pine." Alaskan history itself seems to be rich, so very rich in ... the letter K. "The year before Jack London arrived, Skookum Jim Mason and Dawson Charlie met up in the Yukon Territory east of the Alaska border with a gold miner who had been panning near the Klondike River," reads one particularly chunky sentence. Decades later, that same territory might be crossed by a winning Iditarod dog team, whose members had endearing names like Hobo, Lippy and Fudge! There is the truly startling tale of their neighbor Doc. A private bush pilot, he was electrocuted and fell off a ladder while hand-draping fluorescent flagging over power lines so he could more safely land his Citabria at home. Never one to give up, after the accident Doc "retrained himself to be a left-handed, one-armed dentist"! Writes Palin of her huntin' dad (who is known for palming balmy, just-removed moose eyeballs and warming fish eggs in his mouth), "So a lot of what Alaskans ate, we raised or hunted: moose, caribou, ptarmigan, and ducks. Dad and his friends became their own small-game taxidermists. Even today, my parents' living room looks like a natural history museum. And when an earthquake hits, Dad can tell the magnitude by how fast the tail wags on the stuffed cougar." As Frontier literature, I believe "Going Rogue" compares favorably to the Natty Bumpo stories of James Fenimore Cooper. And who wants to argue with me?

Indeed, by the end of this book, I thought, Never mind the hundreds of thousands of reasons the fiery Republican femme fatale is hated in, for instance, my oh-so-blue state of California. Honestly, a fair amount of what makes Sarah Palin weird is the very same stuff that makes Alaska weird. Covering one-fifth of continental North America (as Palin points out), Alaska is baffling. Alaska is ungraspable. Recall Jon Krakauer's descriptions of Alaska in "Into the Wild." On the one hand, a Palin quip about her favorite natural "organic protein" seems calculated to inflame PETA: "I love meat. I eat pork chops, thick bacon burgers, and the seared fatty edges of a medium-well-done steak. But I especially love moose and caribou. I always remind people from outside our state that there's plenty of room for all Alaska's animals -- right next to the mashed potatoes."

On the other hand, in Alaska it appears people really do eat what they hunt. They hunt in Alaska, they do: Wind chill drops to minus 60, there's no main thruway to Juneau, wolves are predators, they kill moose and caribou, so hunters shoot them, half are Native Americans, people get their heads lopped off in snowmobile accidents, oil spills destroy fisheries, thousands of jobs depend on natural pipelines, stuffed cougar tails shake in giant earthquakes, there are halibut tacos, God knows.

So when Palin writes: "The spirit of Alaska is unique, combining awe for the untamed majesty of nature, a rugged individualism, and strong traditions of mutual aid," what can you do but shrug and grudgingly concur? Sarah Palin is Alaska. She is Alaskan. (I almost bouncily want to write "AlasCan!") As for the next chapter, look for new brooches, at least in 2012.

Sandra Tsing-Loh is a writer and performer based in Los Angeles. Her most recent book is "Mother on Fire."