The war industry's drums are beating

The pressure is on President Obama to act quickly in Afghanistan. But why? 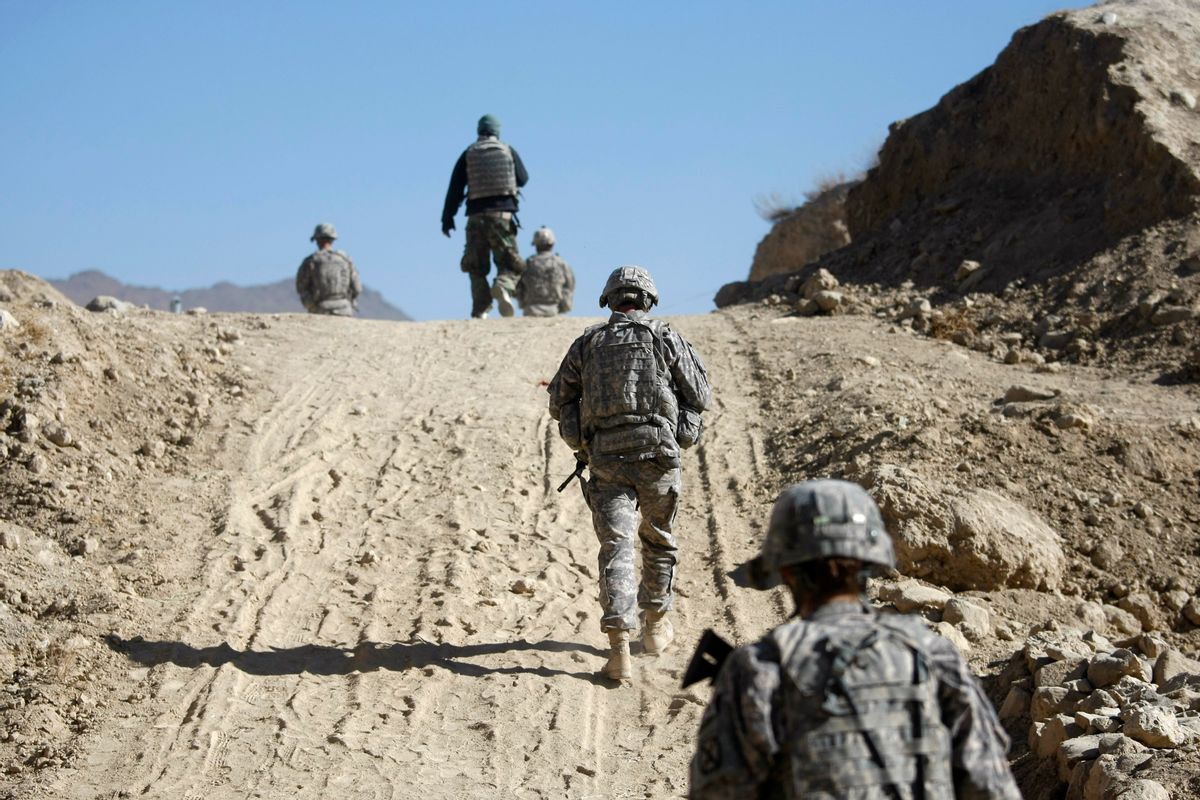 U.S. soldiers walk on a dirt road while on patrol near the town of Pul-i-alam, Logar province, Afghanistan. Afghanistan scored lowest on the Corruption Perceptions Index 2013. (AP Photo/Dario Lopez-Mills)
--

Hurry, hurry. There's no time for thinking; it's time to act. Washington's permanent war lobby has worked itself into a veritable lather. The proper Pentagon press leaks have been made, Op-Eds written, talk show commandos deployed.

No less influential a military mind than the Washington Post's David Broder declares that even a bad decision about Afghanistan would be better than a postponed decision. Conceding that "a flood of leaks" has shown that "the perfect course of action does not exist," Broder nevertheless counsels haste. "[T]he urgent necessity," he writes, "is to make a decision -- whether or not it is right."

Read that again. Better to do something stupid, the man says, than for President Obama to ask too many tough questions.

Not even about such seemingly consequential matters, according to White House counter-leaks, as the Afghan government's epic corruption, whether or not Gen. Stanley McChrystal's counterinsurgency plan includes an exit strategy, and how the United States can sustain a troop "surge" in Afghanistan estimated to cost $1 million, per soldier, per year.

There's another sentence to read twice. One million tax dollars to support each American soldier in Afghanistan, every year. A substantial proportion, alas, spent flying coffins home to Dover Air Force Base.

Almost every time you turn on the television, somebody's carrying on about the projected trillion-dollar cost of Democratic health-insurance reforms -- derived by multiplying the $100 billion yearly cost by 10, and often by ignoring the projected $11 billion yearly savings to the U.S. budget deficit.

Pentagon spending this year alone, however, columnist David Sirota points out, is projected at $673 billion, for a 10-year total of $6.73 trillion. That's assuming costs don't rise. (Fat chance.) Giving McChrystal the soldiers he wants, along with training and equipping an Afghan army of dubious loyalty, is projected to cost an additional $40 billion to $50 billion each year. Yet nobody's supposed to ask how anything that happens in that remote land could possibly justify the costs.

Time was when Republican politicians sneered at "nation-building" -- particularly in remote places like Afghanistan that aren't nations to begin with. Today, however, to think is to "dither." Virtually every pundit in Washington appears to have accepted former Vice President Dick Cheney's formulation. Never mind Cheney's own eight-year record in Afghanistan: The time for action is now.

But why? Are the barbarians at the gates? Hardly. There are no battlefronts, no standing armies, and no immediate military threat to the United States. U.S. intelligence estimates that maybe 100 ragtag al-Qaida fighters remain scattered across the Afghan outback.

For all its brutality, the Taliban rebellion is mainly a localized, nationalist effort to expel foreigners -- one reason Gen. McChrystal hopes to be able to pacify them, as his mentor Gen. David Petraeus bought off Iraqi insurgents. With winter approaching, Taliban fighters will soon be forced into semi-hibernation. Any U.S. buildup will take at least a year to complete.

The big rush, in other words, has less to do with military necessity than with Washington political theater: specifically, the war lobby's ability to force President Obama's hand. Actually, "war industry" might be more apt. It's both more concise than the "military-industrial complex" President Eisenhower warned against and it takes into account the "privatization" of military jobs once done by soldiers -- such as driving supply convoys (Halliburton), guarding embassies and other U.S. facilities (Blackwater) and training Afghan soldiers (DynCorp International).

One needn't accept World War I-era radical Randolph Bourne's formulation that "war is the health of the state," to worry about the connection between corporate warfare and corporate welfare: corporations that donate to political campaigns, hire ex-politicians (such as Cheney) and generals (too many to count) as executives and board members, not to mention as lobbyists, publicists, etc. Sometimes over the table and sometimes under.

Only last week, we learned that yet another big Washington hawk had a secret piece of the action. According to the New York Times, following on research by Norwegian journalists, Peter Galbraith, the Clinton administration's ambassador to Croatia and a leading Democratic voice urging the U.S. invasion of Iraq, stands to gain "perhaps a hundred million or more dollars" from a previously undisclosed stake in Iraq's oil industry. The son of the late economist J.K. Galbraith, in March 2009 he was made the U.N.'s second-in-command in Afghanistan at the insistence of the Obama White House.

Remember when only leftist crackpots and Arab conspiracy theorists said invading Iraq was more about oil than democracy?

Following upon David Barstow's 2008 Pulitzer Prize-winning New York Times exposé about blatant conflicts of interest among Pentagon-coached retired generals posing as disinterested "military analysts" on every TV news network you can think of, Americans can no longer afford to be blasé about the war industry.

They're selling us endless war the way they sell cellphones and Viagra.

The question is: How much is President Obama buying?