"Bad Lieutenant": So bad it's good 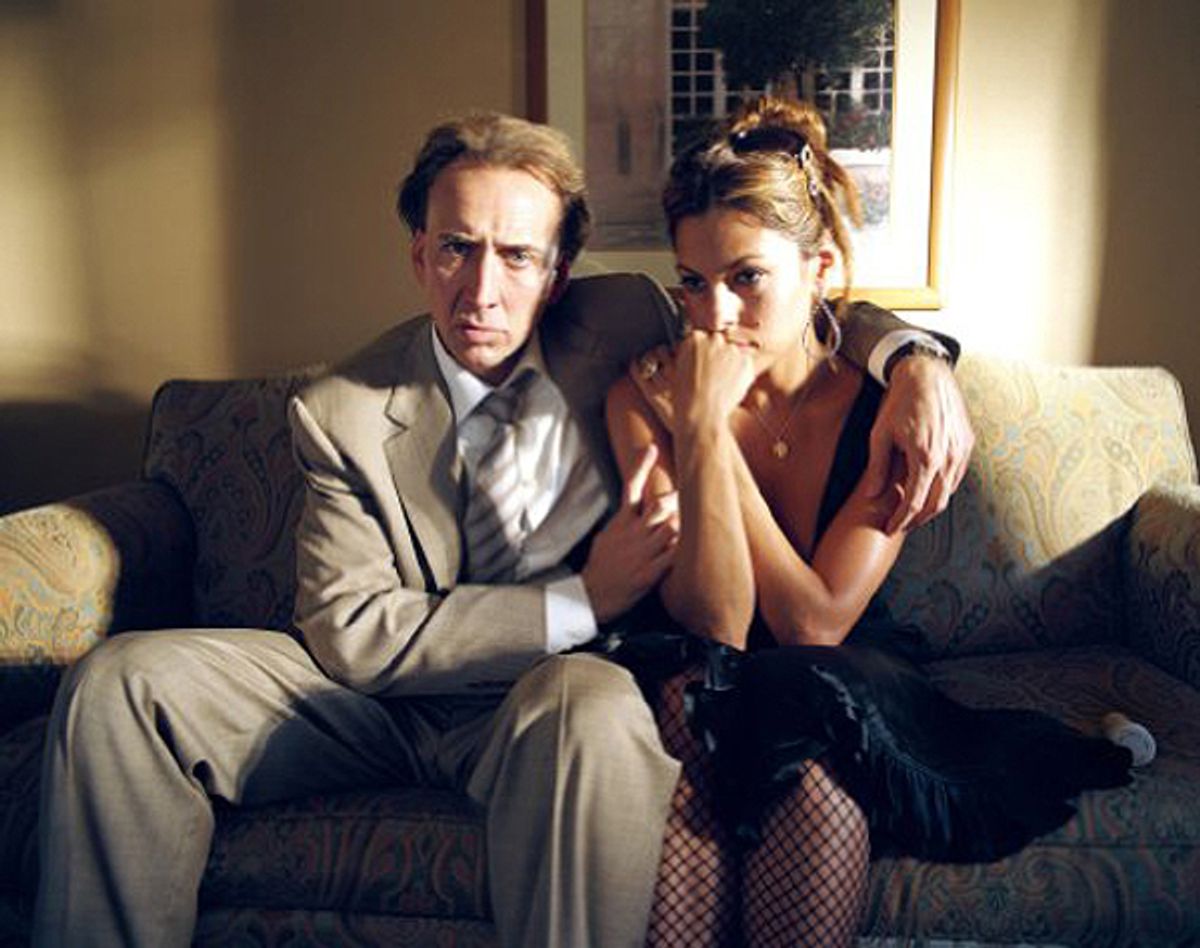 There's a valuable lesson to be learned from "Bad Lieutenant: Port of Call New Orleans": Two wrongs don't make a right -- it takes at least three. And Nicolas Cage, as detective Terence McDonagh, is a very bad lieutenant: An unrepentant, if highly functional, cokehead, he accosts and bullies unwitting club kids so he can steal their drugs and, possibly, have sex with their girlfriends. He has no compunction about playing rival crime bosses against one another if it will somehow help pay off his mounting gambling debts. He thinks nothing of choking off an old lady's oxygen supply, if that's what it takes to get her to listen up. And his closest friend, maybe the love of his life, is a high-class call girl named Frankie (Eva Mendes, who's wonderful even when she's barely trying). You can tell he really, really likes her by the way he shares his drugs with her: They're like two kids bonding over the contents of a single Pixy Stix.

There's already a great deal of buzz on Werner Herzog's gonzo-arty, most definitely not-a-remake detective picture, and for good reason: "Bad Lieutenant: Port of Call New Orleans" is less like a movie than an interpretive-dance piece, with Cage as its lurching, depressed-satyr star. It's important to note, first off, that Herzog's picture has virtually nothing to do with Abel Ferrara's 1992 "Bad Lieutenant," even though the screenwriters of that picture get a credit here. (As far as the script goes, it's William M. Finkelstein, who's written episodes of "Law and Order," "NYPD Blue," "L.A. Law" and Steven Bochco's short-lived musical police drama "Cop Rock," who's really holding the bag.)

And the plot details matter less than the picture's overarching mood of lunacy: In post-Katrina New Orleans, a family of Senegalese immigrants, including several children, have been killed in what is clearly a drug-related crime. There's one witness, a teenager who'd been making a grocery delivery to the household at the time (played by Denzel Whitaker, who, incidentally, is named after Denzel Washington but is no relation to Forest Whitaker). The kid is so important to the case that he's obviously in a lot of danger -- not that that matters to McDonagh, who's more worried about scoring and finding a temporary caretaker for his dad's dog: Pops (Tom Bower) is a former cop who's trying to kick his own drinking problem, and his also somewhat boozy wife (Jennifer Coolidge) claims she can't be bothered to look after this laid-back sweetpea of a golden lab, who trots through the movie with affable cluelessness. (Dog lovers might want to know that no harm befalls him.)

Things happen in "Bad Lieutenant," all right -- except it's not always clear whether they're actually happening or we only think they're happening, which is part of Herzog's nefarious plan. He builds his movie layer by crazy layer. Early on, as McDonagh and his partner (played by Val Kilmer) swagger through a near-empty prison (it's been evacuated because of the hurricane), a lone trapped prisoner calls out for help. The waters are rising! Could someone please rescue him? Please? "Please what, shit-turd?" McDonagh shoots back, in a line I'm still not fully convinced I actually heard, or heard properly. (How might a "shit-turd" be distinguished from a simple "turd," I'm wondering?) Then he says he can't rescue the guy because he's wearing $55 underpants. Then he dives in and rescues the guy. Perhaps you're beginning to get the picture.

The interior scenes in "Bad Lieutenant" look as if they might have been lit with a Mini Maglite and some artfully arranged reflectors made of tinfoil. In many of the outdoor scenes, the sun bathes everything -- houses, sidewalks -- in an unpleasant bleached light. (The man behind these bad-on-purpose effects is cinematographer Peter Zeitlinger, who has worked with Herzog on pictures like "Grizzly Man" and "Rescue Dawn.") About two-thirds of the way through "Bad Lieutenant," some of the novelty of Herzog's purposeful, mannered ineptitude began to wear off. But by the end, I'd rallied, buoyed by the picture's surprise ending.

I realize I haven't even told you about the imaginary iguanas, or the break-dancing disembodied life force, or the semi-dead gator lying in the road, waving a single leg in defeat. Those details, strange and wonderful, are better seen than they are explained. But they're not as strange and wonderful as Cage is. I've heard some people comparing this loose, relaxed (to the point of being unhinged) performance to the one Cage gave in "Leaving Las Vegas," and I wouldn't go that far: Cage isn't diving into the abyss here -- he's merely dipping a toe into the murky whirlpool. But he's great fun to watch, or at least as much fun as a corrupt, self-centered, foul-mouthed, back-pain-suffering, coke-addicted cop can ever be. Cage's McDonagh is a troubled soul: He sometimes resembles a Max Beckmann charcoal drawing, all angular slashes and sunken shadows. And an early scene establishes that this character is in almost constant pain, which of course requires medication. ("Whatever I take's prescription -- except for the heroin," he says at one point, with the disarming honesty of a schoolboy.) Because of that pain, his posture is stooped, and he does more stiff shuffling than actual walking -- he's a little Quasimodo, a little Frankenstein. Still, Cage is more fully alive as a performer than he's been in years, giving a performance of gestures and expressions that don't seem to be measured out with dollar signs attached. He may be limping, but at least he's dancing.