After an ADL report says Beck may foment violence, I visit racist Web sites to see if their denizens are listening 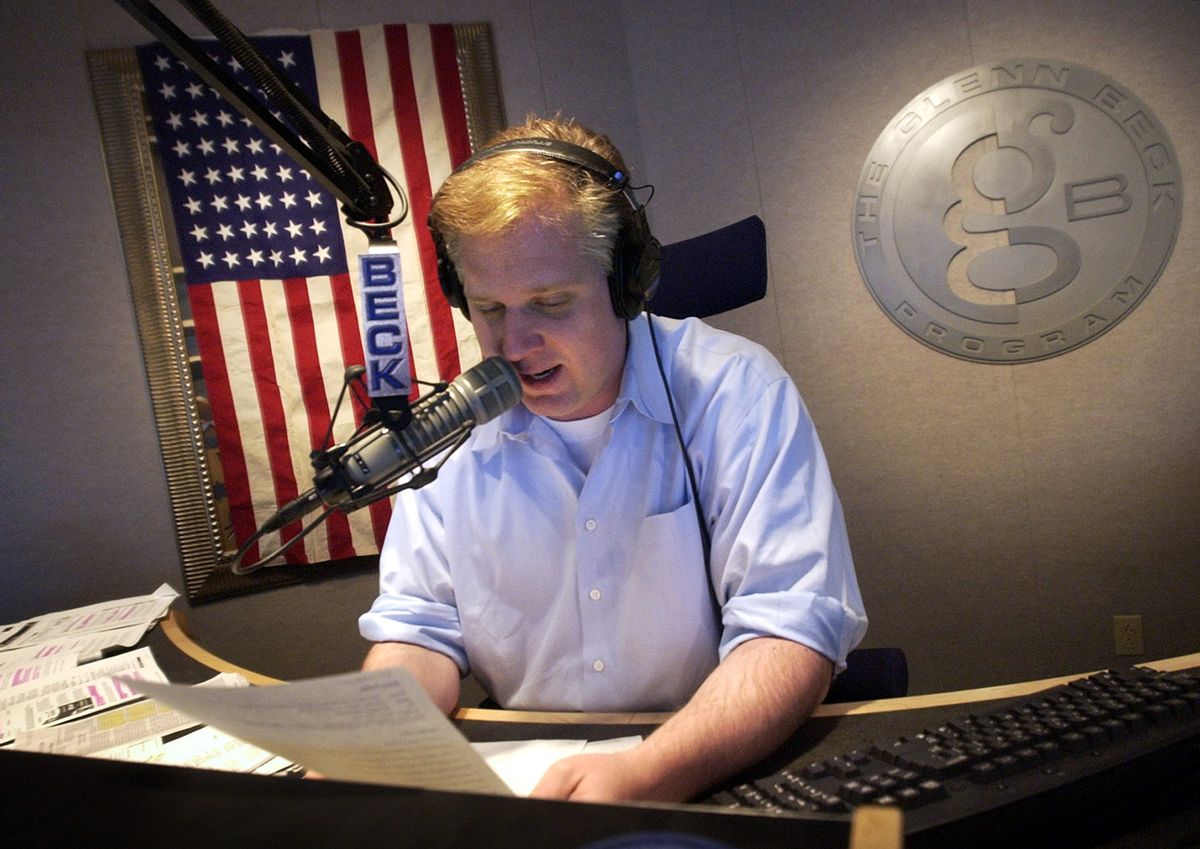 It's been a busy week for Glenn Beck watchers. On Monday, the Anti-Defamation League released a report warning of the paranoia and stridency that increasingly define the conservative grass roots. It echoed an April report issued by the Department of Homeland Security, but unlike the DHS report, the ADL named names, and fingered Beck as the figure most responsible for the unhinging of the right.

"Beck has acted as a 'fearmonger-in-chief,' raising anxiety about and distrust towards the government [which] if it continues to grow in intensity and scope, may result in an increase in anti-government extremists and the potential for a rise of violent anti-government acts," the ADL wrote.

Amazingly, just after the ADL report's release, Sarah Palin responded to a question about a possible Palin-Beck ticket by refusing to rule out Beck as a running mate. She praised him effusively, describing him as "bold, clever, and very, very, very effective."

Effective at what, exactly?

Earlier this week, Sam Stein of the Huffington Post detailed several instances in which Beck has welcomed onto his shows guests with ties to groups that traffic in white supremacy, neo-Confederate secession, and anti-Semitism. Stein's reporting was a good start, but it would take a chalkboard the size of Idaho to fully map out Beck's racially paranoid guest list.

But Beck insists his critics are imagining things, that he does not engage in racial fear-mongering, that a string of guests with ties to hate groups do not form a meaningful pattern, and that he's not a racist. It occurred to me the other day that if you really want to know whether Beck and his guests are blowing racial dog-whistles, it's best to ask a dog.

I decided to reach out to Don Black, the avowed white nationalist who runs the Web site Stormfront.org, the country's leading "Discussion board for pro-White activists and anyone else interested in White survival." But Black hung up on me. I next tried to get in touch with David Duke, the former gubernatorial candidate and current head of the European American Unity and Rights Organization. Duke, too, had little interest in talking to me, likely because of my past association with the Southern Poverty Law Center, which tracks the activities of white supremacist groups.

Unable to get through to the highest-profile spokesmen of the racist grass roots, I took a page from the other side and trawled their Web sites for insight. I scanned Davidduke.com and Stormfront.org to see what they had to say, if anything, about Beck. Admittedly, this method is not scientific, and certainly folks on the left don't like it when righties cherry-pick an extreme comment from Daily Kos or the Huffington Post and pretend the whole site can be summed up by such extremism.

On the other hand, Stormfront.org isn't a media organization but a self-described discussion board. And when it comes to Beck, the discussions are fairly positive. On both David Duke's Web site and Stormfront, Beck's July 28 claim that President Obama harbors a "deep-seated hatred of white people, or the white culture" was met with attention and appreciation.

Duke was heartened by the discussion it generated, and placed it in a larger context. "A lot of stuff is happening in the world of race relations and little of it points towards a post-racial society," Duke noted. "Beck is steadily losing advertisers, but his viewers seem to be sticking with him ... White desperation is manifesting itself in various forms."

Beck's charge that the president hates white people sparked a more expansive discussion at Stormfront.org. Some participants saw Beck as an important ally in the White Nationalist cause. Others were skeptical, viewing him as a clueless conservative version of Lenin's "useful idiot." But some of Stormfront's most active members generally agreed that, whether he was fully conscious or not, Beck was nudging his audience toward an embrace of racial consciousness.

"Glen [sic] Beck can be useful," said one frequent Stormfront contributor who posts under the name SS_marching. "When Glen beck said 'Obama Has A Deep-Seated Hatred For White People' he is able to reach a much wider audience than we can. They will [be] predisposed to the idea and the next time Obama pushes an anti-white policy they will see it as such."

"seems to have ignited a flame under the asses of some folks with similar ideas by pushing the right buttons. It appears as if the current regime [is] directly blaming GB and fox news for throwing a wrench in their machine. Is Beck's rambling getting America fired up and ready to fight? Has Beck told enough of the truth to start something bigger? Even an engine needs a starter to get fired off and go down the road."

Thor357, a Stormfront sustaining member who has posted on the site more than 3,500 times, had this to say:

"Glenn Beck and Alex Jones [a controversial conservative media figure who believes 9/11 was an inside job] are the front line in the war of Ideals we grapple with, they are far from perfect and are somewhat compromised. But every person in the last 2 years that I have introduced to the WN [White Nationalist] Philosophy have come largely from Alex Jones, Glen Beck and the Scriptures for America founder Pastor Pete Peters ... Baby steps are required for people like these, but the trio Beck, Jones, Peters are the baby food that feeds potential Nationalists… Glenn Beck is not far behind as his Mormon background indicates to me as most Mormons I have met are not friends of Jews like the Church was years ago. Most Mormons I know are arming themselves, with guns, bullets and food."

"I have talked to 6 people in two days because Glenn Beck woke them up, it's amazing how angry they are. They are pissing fire over Obama, this is a good thing. Now I educate them. If out of 100 of the Glen Beckers I keep 20 then I have won 20 more to cover my back side. I never lost the 80 as they never were."

Carolina Patriot, whose member picture features a kitten aiming an assassin's rifle, was conflicted but admiring:

"Every now and again when an infomercial takes the place of hunting or fishing, I'll turn over to Glenn Beck if he's on and watch his show. Sometimes it is amusing, sometimes it is informed, and sometimes, I think he comes to SF [Stormfront] to steal show idea's"

UstashaNY offered up an analogy to substance abuse, with Beck as the soft-stuff hook:

"Beck, Dobbs etc. are like gateway drugs. If it wakes up one person to learn something about whats really going on and that person does the research, looks deeper and deeper into WHO and WHAT is behind all of this, then its a win for the movement. NOBODY in the msm is reporting the stuff Beck does, let him keep talking. It will wake people up, believe me… He is more of a help to us then you may think. Until we have a REAL voice in the msm, guys like him and Dobbs are a stepping stone right into our laps. Its only a matter of time..."

Even those who don't think Beck understands what he’s doing appreciate his instincts. According to WhiteManMarchesOn88:

"There is no doubt that Beck is not a WN [white nationalist], but I have to agree that he does raise a lot of really good questions that do promote White survival. I'm sure he would go a lot farther with a lot of his questions, but ZOG [Zionist Occupied Government] would more than likely kick him off television if he did."

ZOG or no ZOG, Beck is clearly doing something right from the point of view of the average white nationalist.

"By no means do I think [Beck] is aware of the racial issue, and for the moment that is ok," wrote Stormfront member QHelios. "He is stirring the pot, and I thank him for that."