The talk show goddess's exit sparks abandonment issues as women everywhere ask, "How will we go on?" 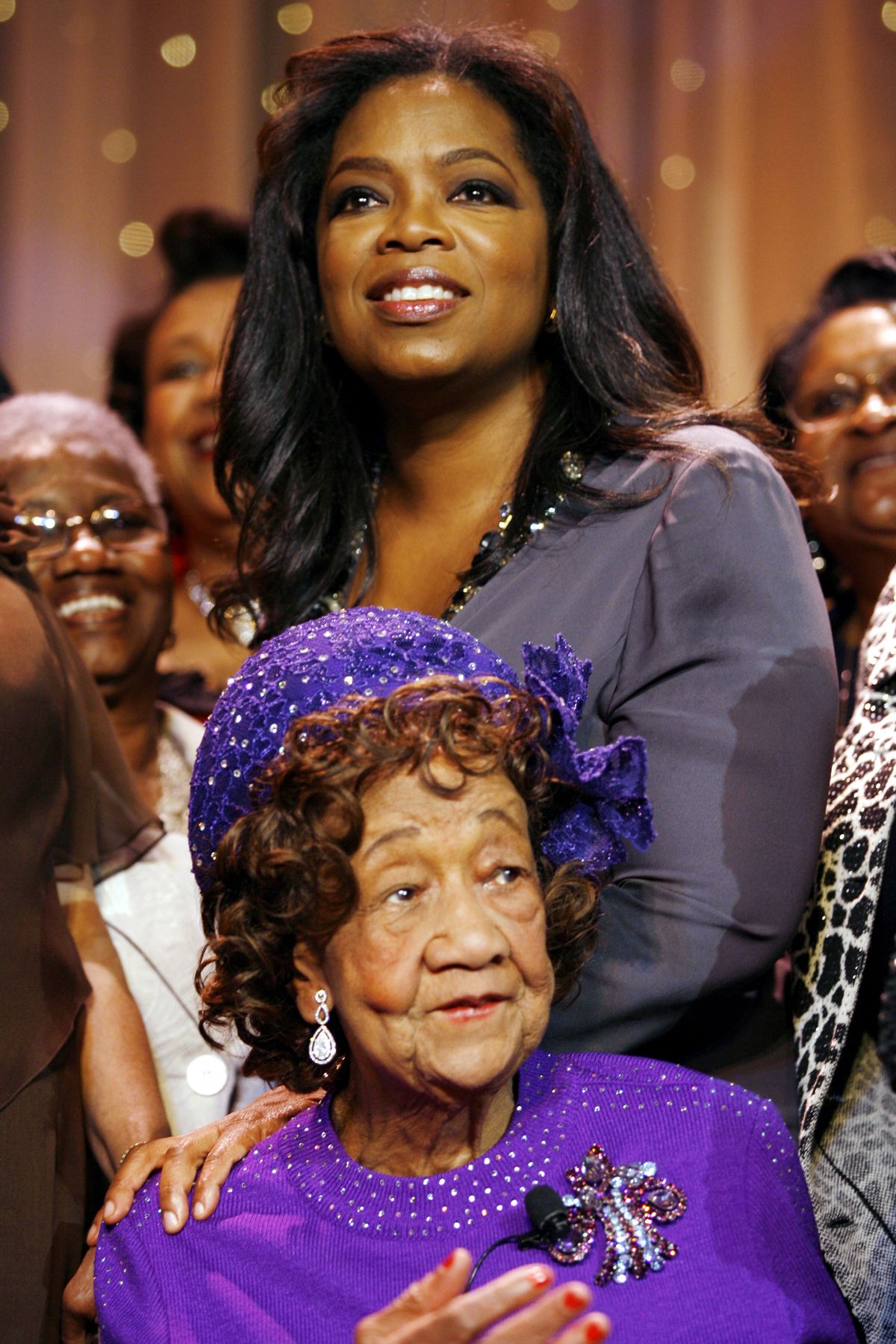 Do you feel helpless and betrayed? Is your breathing rapid and shallow, your pulse racing? Do you feel angry, confused, hurt? Have you felt this way every since you heard that Oprah will be ending her talk show in September of 2011?

Then, like me, you're one of millions of American women who are suffering from abandonment issues as our televisual headmistress, virtual life coach and personal savior Oprah leaves her omnipresent, omnipotent post on the small screen.

Don't misunderstand how high the emotional stakes are here: Our love for Oprah burns brighter than the light from a thousand suns. We trust Oprah more than we trust ourselves. We would follow Oprah to hell and back, with or without the promise of a brand-new 2009 Pontiac G6 Sedan with sunroof and cruise control.

Oprah tells us what to read. We don't always love her taste in books, but we love chatting about books with her on her butter-yellow couches. Oprah tells us whom to love and admire. We don't always care what Barbra Streisand is up to, but we love watching Babs and Opes clash and subtly try to outshine each other, like colliding stars. Oprah feeds our souls. We never liked Dr. Phil that much after he exited Oprah's sacred circle of trust, but while he was basking in her glow, his words spoke to our very hearts. Oprah delivers us from evil. When Hurricane Katrina hit, we didn't wonder what George W. Bush or the Coast Guard would do to help those people, we wondered what Oprah would do. Maybe some of her ideas are a little weird, maybe some of her guests are quacks, but Oprah herself is smart and brash and so awesomely powerful but also so openhearted and so wise.

What will we do without her?

Yesterday, when word got out that Oprah will be wrapping up "The Oprah Winfrey Show," which has been on the air since 1986, so that she can focus on her new cable television channel, the Oprah Winfrey Network (or OWN), a nation full of women collapsed into the fetal position. Our husbands or roommates or dogs found us in a crumpled heap on the rug, mumbling through tears, "I want my imaginary black mommy! I want my imaginary black mommy!" Will we be like this for almost two years, until Oprah is really gone? Probably.

Of course the media isn't helping to put things into perspective. The Wall Street Journal suggests that Oprah's departure from TV will crush the syndicated television market and strike a devastating blow to book publishing. The New York Times warns that ABC's daytime ratings and evening news will both take huge hits, and Oprah's move to start her own cable TV channel will strike "a blow to the fortunes of broadcast television." An AP wire story called Oprah's departure a "blow to CBS" (which distributes her show in syndication). How can we begin to put this devastating personal loss in perspective, when all we read about is how Oprah will single-handedly crush every industry in America?

Meanwhile, naive journalists nationwide muse over who will ever replace Oprah. Um, did you just say replace Oprah? To those of us who've just locked ourselves into our closets so we can weep and swill cooking sherry and mourn this loss in private, that's like imagining ways to replace the sun, or the moon, or the Atlantic Ocean, or Chris Rock ... who, of course, has appeared on Oprah several times. But then, in America, appearing on Oprah is the rough equivalent to being knighted.

Oprah herself was in tears, like any good mommy should be when she announces that she'll be ditching her kids and moving on to more pressing and important things. She told us that, after a quarter of a century on the air, leaving her talk show just "feels right in my bones and feels right in my spirit." Oh, Oprah, even as you're kicking us to the curb, we understand and empathize! We feel you and we forgive you.

But … how will we survive without you? Our minds race back to the days when Oprah was fat, when she wondered if she and Steadman would ever get married. We were only teenagers then, and we naively thought of Oprah as just another talk show host. Then she took a supporting role in "The Color Purple," and our love for her blossomed out of nowhere. Later, when she was targeted by the beef industry, we got our hackles up over it. How dare those bad rancher men mess with our sweet, thoughtful, tough-loving girlfriend Oprah! When Jonathan Franzen sniffed at the notion of having an "Oprah Book Club" logo on the cover of his acclaimed novel "The Corrections," we hated him for it (even though we still loved his book), and vowed that if Oprah ever let our book into her book club, we'd happily throw out our book cover for an enormous close-up photograph of Oprah's right ass cheek. (I bet it's a pretty one.)

OK, maybe that was just me. But I doubt that I'm alone on this, because for most smart women in this country who are paying attention and care, Oprah walks on water. Why? It's quite simple: Oprah is not just compassionate and charismatic, she knows what's lively and informative to watch or think or talk about. She's a masterly interviewer. She's got a great sense of humor. She's more comfortable in front of the camera than anyone else in the world. She's fun. And when her audience at home starts to get bored, she's bored, too. You can see it on her face, that wrinkling of the nose and squinting of the eyes that means she's about to interrupt some sob story or self-involved digression and get right to the heart of the matter. Oprah always, always knows how to keep things interesting.

Of course we knew this day would come eventually! There are only so many years you can spend, being surrounded by people who treat you like the second coming of the Lord, before you want to expand your empire and spend most of your time running it (much like God) instead of chatting amiably to a camera about green smoothies or obscure Nigerian authors or Nicole Kidman's baby (more like God's disciples -- tenacious, but often bewildered and/or martyred). God Himself may enjoy your devotion, but it's not like He can be bothered to have heart-to-hearts with you about how to make over your man.

Oprah does promise that the final 18 months of "The Oprah Winfrey Show" are going to be the greatest, most memorable months ever, but that's sort of like your mom taking you for an awesome trip to Disney World before dropping you off at the local orphanage. We can picture the final days of Oprah's show already: The Dalai Lama himself will teach us how to bake a quick and easy soufflé, Katie Holmes will jump up and down on Oprah's butter-yellow couches to announce her joy over divorcing Tom Cruise, Michael Jackson will rise from the dead to sing "Thriller" to a live studio audience, and every woman in America will receive the keys to a brand-new 2011 Pontiac Solstice with GPS navigation and built-in video iPod.

But until then, Oprah is going to have to help us to peel our snotty faces off the floor. In fact, Oprah should probably consider buying time on every channel for a very special public service announcement, in which she'll coax us all, very softly, to splash a little cold water on our faces and run a comb through our hair and have a sandwich. You can do it, she'll tell us in that warm, loving growl of hers, and we'll believe her ... until we start shivering and sobbing again. Eventually, of course, Oprah will have to dedicate a weekly segment to Dealing with Oprah Abandonment Issues, and thoughtful psychologists and clinicians will have to come and explain to us several techniques for letting go and moving on by ourselves, stronger and better than ever.

And we'll try, very very hard, to follow their instructions, mostly because Oprah told us to. But all the while, a voice deep inside us will be screaming, "Stronger? Better? Without Oprah?!! That's just not possible."

And on that front, Oprah herself can hardly disagree.

Abc Cbs I Like To Watch Oprah Winfrey Television