How did we end up with know-nothings for wise men? 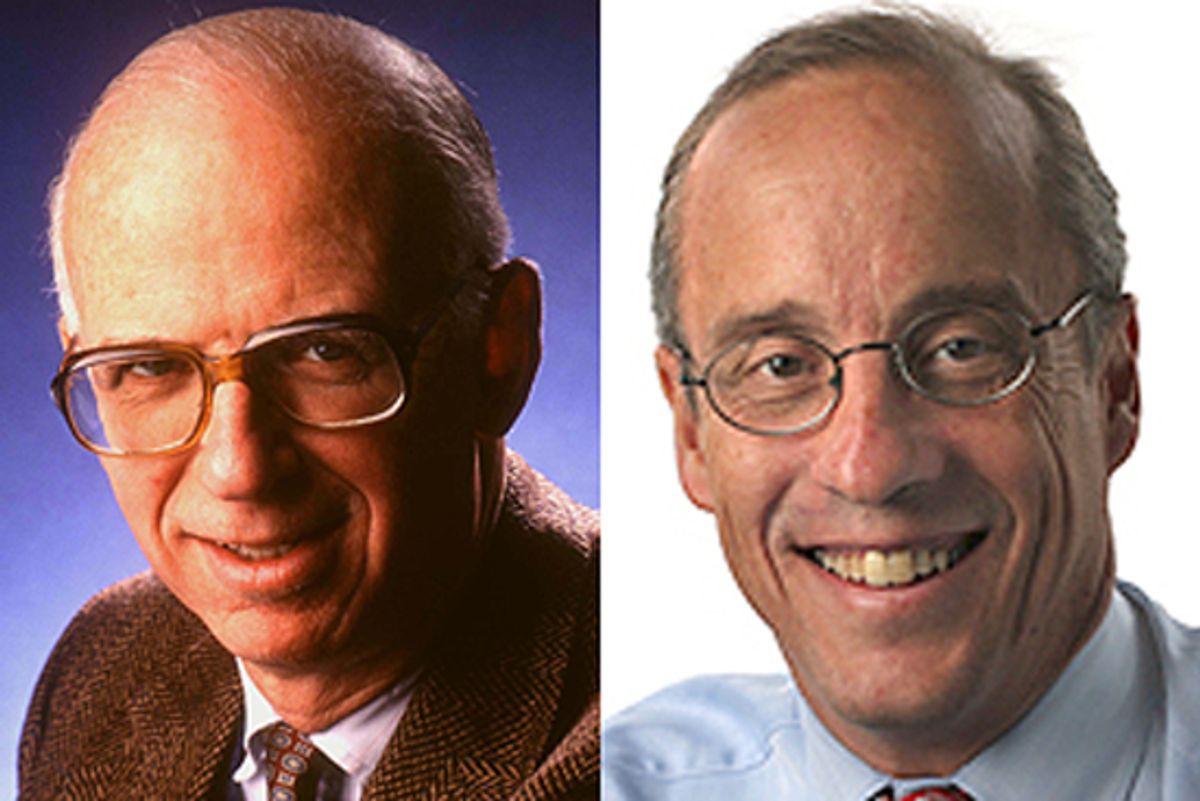 In the parlance of our times, the term "idiocracy" means a nation run by idiots -- and the term "idiot" is defined by the dictionary as "an utterly foolish or senseless person" who exhibits "a mental age of less than 3 years old."

There are obvious reasons to believe America is becoming an idiocracy -- a series of horrendous government and business decisions strongly suggest that we've seen the ascension of utterly foolish, senseless people, many with the mental age of infants (yes, W., I'm looking at you). And if there remained any flicker of hope that we aren’t turning into a full-on slobbering idiocracy, that hope was snuffed out last week by two of the Washington intelligentsia's most respected voices.

First came a now-famous column about Afghanistan by the Washington Post's David Broder. The "dean" of the press corps attacked President Obama not for choosing any particular policy, but for simply taking time to meticulously consider his options in the Central Asian quagmire. "The urgent necessity," Broder asserted, "is to make a decision -- whether or not it is right."

This was followed by Jackson Diehl, the Post's foreign policy "expert." He wrote that the White House’s assiduous Afghanistan deliberations are not a sign of reassuring prudence after the bring-it-on Bush years, but instead a "compelling cause for unease about this president." Diehl's rationale for such an incendiary statement? He alleged (without proof, of course) that "there is unanimity in the Pentagon and considerable agreement in Congress and among the NATO allies" that a military escalation has to happen -- and therefore Obama "knows (the pro-escalation) course he must take" but "can't bring himself to embrace it."

Let's set aside the nauseating spectacle of two well-heeled journalists, comfortably protected far away from the front lines, demanding a president immediately send thousands of soldiers to their potential deaths without regard for blood-and-guts consequences. Let's just, if we can, put that grotesque immorality in a corner and pretend it's not important -- and let's go to the deeper, even more disturbing message.

As leading opinion-makers, Broder and Diehl are paid to carefully ponder issues and then offer their considered thoughts. That's not part of what they're supposed to do -- it's what they are singularly employed to do. It's how they earn their living and credibility -- indeed, it's their entire raison d'être. And yet, these leading lights of the intelligentsia are overtly preaching anti-intelligence, insisting the president must avoid taking time to think through his actions.

This isn't interpretation -- it's what these Beltway sages are literally saying. Broder is explicitly demanding Obama make a knee-jerk decision -- any decision -- even if it has catastrophic consequences. Likewise, Diehl is calling for Obama to immediately risk thousands of American lives simply because that's what Diehl believes the establishment wants.

Let's be clear -- these are just two of many similar examples. Today, screeds calling for leaders to prioritize lightning-fast decisions over measured deliberations are increasingly commonplace in the Washington intelligentsia, even after an Iraq debacle brought on by the same ideological know-nothingism.

The trend is deeply disturbing. It's one thing for talk-show-host wannabe Sarah Palin or carnival-barking provocateur Glenn Beck to glamorize willful ignorance -- that's been the narcissistic act of celebrity court jesters since the dawn of history. But it's an entirely different thing when hostility to intelligence and to the basic process of thinking itself emanates from the very professional thinkers who lead the nation's intelligentsia.

When that happens -- when the supposed guardians of political cognition and empiricism begin publicly flaying leaders for taking time to fully evaluate potential decisions -- it's a sign our country is becoming the ignorance-deifying idiocracy we should all fear.