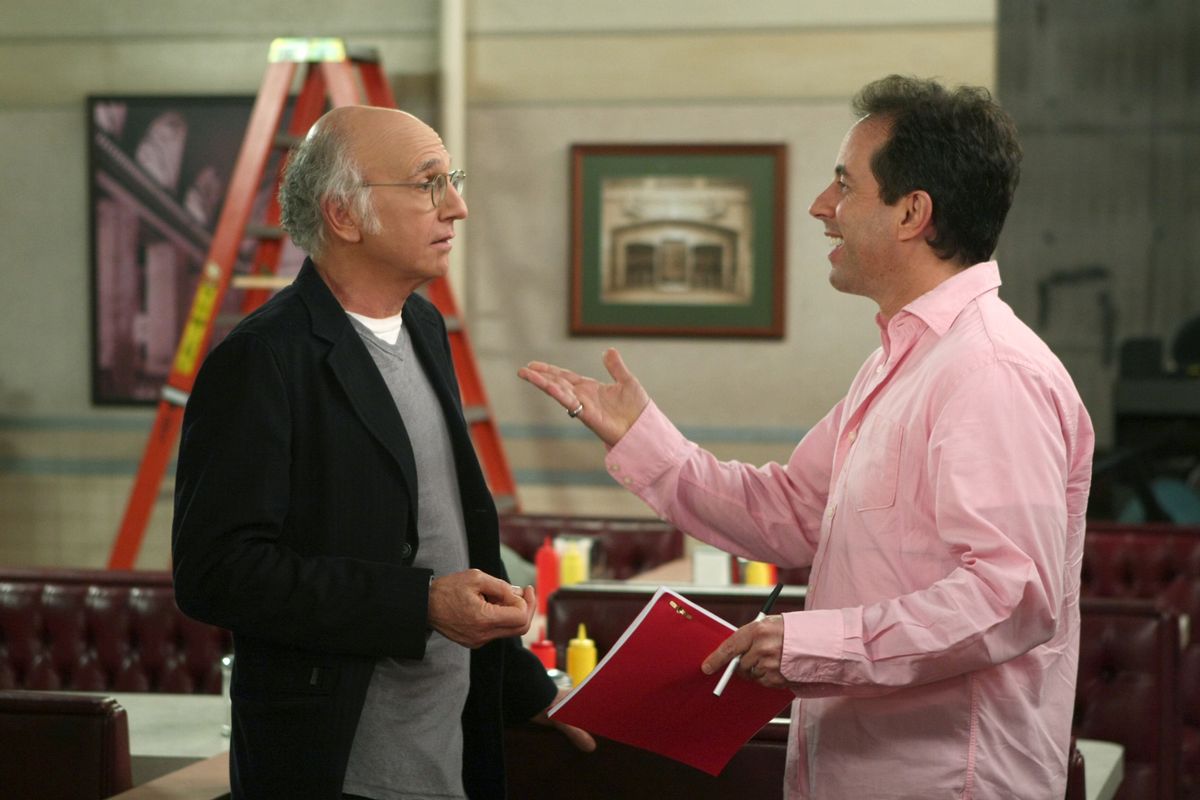 Why can't the cast of "Seinfeld" appear on "Curb Your Enthusiasm" every season?

Last night's seventh season finale offered a particularly tantalizing taste of just how funny the "Seinfeld" cast and its creators still are after all these years. The finale and its fictional reunion show not only found several fun and clever ways to bring these familiar characters into a current landscape -- George invents the iToilet but his fortune is ripped off by Bernie Madoff, Elaine ignores Jerry to read her BlackBerry -- but it also featured some truly memorable scenes between Larry David and Jerry Seinfeld.

The behind-the-scenes bits from the reunion plot have proven entertaining all season, particularly when they didn't involve some tiff with Larry David that we've seen a million times before. Larry's spat with Julia Louis-Dreyfus over water stains on her antiques fell into repetitive territory, of course. (And how many times can Suzie call Larry an asshole and throw him out of her house?)

Having said that, the running lines "Do you respect wood?" and Jerry's bit about the absurdity of the segue "Having said that …" both captured that distinctly Seinfeldian flair we all know and miss so desperately. The scene where Larry and Jerry marvel over Jason Alexander's pretentious vanity book "Acting Without Acting" demonstrated the more nuanced and (somewhat paradoxically) more punch line-driven tone that comes from Jerry's comic stylings and Jason's, well, acting without acting, getting thrown into the mix.

In fact, the reunion-focused episodes of "Curb" this season have demonstrated just how funny this show could be if its writers relied more on relatable observations of modern behavior (constant texting by young kids, the vanity of actors) and less on gripes about tipping, personal favors and perceived insults (angry waiters, angry maitre d's, angry coffee guys) that lead to the shouting matches. Even the predictable setup of Jason borrowing Larry's pen last week paid off in spades when Jerry heard about Jason's indiscretions with the pen, shook his head and told Larry, "You don't lend Jason anything, anything that can be ... inserted."

On last week's episode, when several characters reacted to Larry's scatological reference to a kid's rash with stunned silence, culminating in a doctor leaving the room with Larry and quietly instructing his nurse to call the cops, we got a glimpse of how a little restraint allows the show's humor to shine through. Larry was being a jerk, as usual, but the reactions were subtle and the situation was at least somewhat familiar. (I particularly loved the scene where we glimpse Larry texting to his young fan, "NO I DON'T WATCH WIZARDS OF WAVERLY PLACE, I'M AN ADULT!!!!!!!!!!!!!!")

But even after last week's surprisingly strong episode, the finale didn't disappoint, from Larry's jealousy over the smug camaraderie between Cheryl and Jason to his larger-than-life imitation of George. The best scene, though, had to be this classic diner exchange between Jerry and George, after George's estranged wife Amanda is gone for good.

Jerry: Meeting is hard. Why can't you meet?

George: Can't meet! Why is that?

Jerry: This is what single people are thinking about the minute they wake up in the morning. And yet we're surrounded by people, they're right next to us, on the bus, on the street! But we can't meet them.

George: Why won't they meet us?

Jerry: Because strangers have a bad reputation.

George: A few bad strangers have ruined it for the rest of us!

We'll never meet two jackasses we love this much again, will we? Surely there's some government-mandated way to force them to keep producing episodes, for the good of the nation!

But bringing the best sitcom of all time back from the dead is hard. Why is that? Why won't they come back for us? Because reunions and revivals and comedic resuscitations have a bad reputation. A few crappy reunion specials have ruined it for the rest of us!

Curb Your Enthusiasm I Like To Watch Seinfeld Television