Can populism be liberal?

The GOP has owned it since Nixon. Democrats would have to return to the New Deal to recapture it 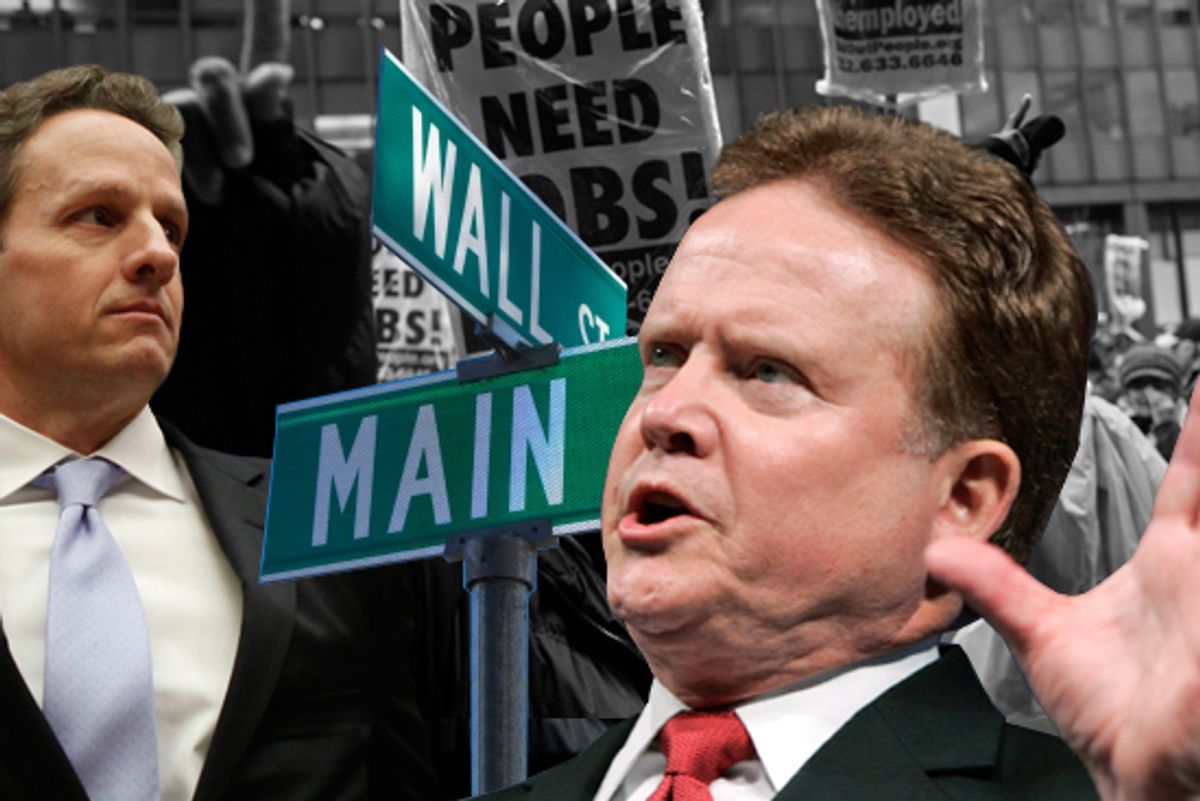 Is a Jackson revival under way? I'm referring not to the late King of Pop but to the 19th century populist president whom his opponents called "King Andrew." According to Michael Barone, in the 2010 elections Republicans have a chance to knock Democrats out of as many as three dozen insecure congressional seats in "Jacksonian districts."

By itself, this would merely reinforce the identification of the Party Formerly Known as Lincoln's with the white South. But in a time of popular anger over banker bonuses and lobby-hobbled government, the themes of Jeffersonian and Jacksonian populism have appeal far beyond the Scots-Irish enclaves of the Appalachians and Ozarks. Witness the calls from Democrats as well as Republicans for President Obama to oust Treasury Secretary Tim Geithner and pay more attention to Main Street than to Wall Street.

In itself, American populism is neither left nor right. Translated into economics, Jacksonian populism spells producerism. For generations, Jacksonian populists have believed that the hardworking majority of small producers is threatened from above and below by two classes of drones: unproductive capitalists and unproductive paupers. While government promotion of public goods like defense, infrastructure and utilities that benefit all citizens is acceptable, Jacksonomics is suspicious of crony capitalists who owe their fortunes to political connections (can you spell B-A-I-L-O-U-T?). And Jacksonian producerism naturally is haunted by the nightmare of a class of the idle poor, who are capable of working but instead live off the labors of others and lack an ownership stake in the community.

Reform movements have succeeded in the United States only when their programs resonated with populist and producerist values. Lincoln's antislavery Republicans succeeded where the earlier Whigs had failed because the Republicans persuaded Jacksonian farmers that snobbish, parasitic Southern Democratic slave owners were a greater threat to white farmers and white workers in the Midwest than rich Republican bankers and industrialists in the Northeast. Lincoln's Hamiltonian program of aid to railroads and national banking had to be sweetened with the offer of Western homesteads for yeoman farmers before former Jacksonian Democrats would join his coalition.

In the 20th century, the most popular and enduring legacies of the New Deal have been the programs compatible with small-d Jacksonian democracy -- public spending on infrastructure like dams and electric grids and highways, the promotion of single-family home ownership, federal aid to education and Social Security and Medicare, two entitlements tied to individual work by means of the payroll tax. In contrast, welfare for the nonworking poor was always unpopular with most New Deal Democratic voters, who preferred public works programs like the WPA, CCC and CETA to relief payments for the poor and unemployed. Although he broke with the New Deal tradition in other ways, President Bill Clinton was true to its spirit when he collaborated with the Republicans in converting "welfare" from an unpopular federal entitlement to state-based workfare programs.

All too often in American politics the populist distinction between producers and parasites has been mapped onto the racial division between whites and nonwhites. But the Jacksonian republican concern about freeloaders is not, in itself, racist. And it has frequently manifested itself in anger at the freeloading rich as well as the freeloading poor. At the moment, populist anxieties about the nonworking poor or illegal immigrants receiving medical coverage are eclipsed by populist anger at federal bailouts for well-connected Wall Street bankers who pay themselves titanic bonuses for unproductive gambling with other people's money.

Here, one might think, would be an opening for the center-left. And yet the Obama Democrats, unlike the Roosevelt Democrats, cannot take advantage of the popular backlash against Wall Street. Why?

One reason is that the attempt of the "New Democrats" like Clinton, Al Gore and Obama to win Wall Street campaign donations has been all too successful. As Clinton's Treasury secretary, Robert Rubin helped complete the conversion of the Democrats from a party of unions and populists into a party of financial elites and college-educated professionals. Subsequently Obama raised more money from Wall Street than his Democratic primary rivals and John McCain. On becoming president, he turned over economic policymaking to Rubin's protégé Larry Summers and others like Timothy Geithner from the Wall Street Democratic network.

The financial industry is now to the Obama Democrats what the AFL-CIO was to the Roosevelt-to-Johnson Democrats. It is touching to watch progressives lament that "their" president has the wrong advisors. "We trust the czar, we simply dislike his ministers." Obama owed his meteoric rise from obscurity to the presidency not to any bold progressive ideas -- he didn't have any -- but rather to a combination of his appealing life story with the big money that allowed him to abandon campaign finance limits. According to one Obama supporter I know, the Obama campaign pressured its Wall Street donors to make their contributions in the form of many small checks, in order to create the illusion that the campaign was more dependent on small contributors than it was in fact. Even now President Obama continues to raise money on Wall Street, while his administration says no to every progressive proposal for significant structural reform of the financial industry.

There remains the progressive wing of the Democratic Party, represented more in Congress than in Obama's White House -- and more in the House than in the Senate, a dully complacent millionaires' club. Can congressional progressives compete with conservatives to channel popular outrage? Unfortunately, progressivism in the form in which it has evolved in the last generation does not resonate with populist producerism.

To begin with, most of the moral fervor of the contemporary center-left has been diverted from the issue of fair rewards for labor to the environmental movement. In theory, environmentalism ought to fit the populist narrative of defending shared goods against special interests. Indeed, clean air and water legislation and public parks and wilderness areas are broadly popular with working-class Americans, not least hunters and fishers. But many environmentalists insist that global warming must be combated not only by low-CO2 energy technology but also by radical lifestyle changes like switching from industrial farming to small-scale organic agriculture and moving from car-based suburbs and exurbs to deliberately "densified" cities with mass transit. Whether environmentalists propose to engineer this utopian social transformation by tax incentives or coercive laws, the campaign triggers the populist nightmare of arrogant social elites trying to dictate where and how ordinary people should live.

Even if it had not been eclipsed by moralistic lifestyle environmentalism, contemporary economic progressivism would be crippled by its own priorities. New Deal liberalism was primarily about jobs and wages, with benefits as an afterthought. Post-New Deal progressivism is primarily about benefits, with jobs and wages as an afterthought. This inversion of priorities is underlined by the agenda of the Democrats since the last election -- universal healthcare coverage first, jobs later.

It is only in the post-New Deal era that universal healthcare has become the Holy Grail of the American center-left, rather than, say, full employment or a living wage. Sure, Democrats from Truman to Johnson sought universal healthcare, and Medicare for the elderly was a down payment for that goal. But the main concern of the New Dealers was providing economic growth with full employment, on the theory that if the economy is growing and workers have the bargaining power to obtain their fair share of the new wealth in the form of wages, you don't need a vastly bigger welfare state. Having forgotten the New Deal's emphasis on high-wage work, all too many of today's progressives seem to have internalized the right's caricature of FDR-to-LBJ liberalism as being primarily about redistribution from the rich to the poor.

This shift in emphasis is connected with the shift in the social base of the Democratic Party from the working class to an alliance of the wealthy, parts of the professional class and the poor. And progressive redistributionism also reflects the plutocratic social structure of the big cities that are now the Democratic base. Unlike the egalitarian farmer-labor liberalism that drew on the populist values of the small town and the immigrant neighborhood, metropolitan liberalism tends to define center-left politics not as self-help on the part of citizens but rather as charity for the disadvantaged carried out by affluent altruists. Tonight the fundraiser for endangered species; tomorrow the gala charity auction for poor children.

At a recent event in Washington, I was surprised when a Democratic senator said, "The major threat facing America today is the class divide." The speaker was Jim Webb of Virginia, the self-conscious heir to Scots-Irish Jacksonian populism. He went on to attack the inhumane treatment of prisoners in American jails and the avoidance of military service by the American elite.

Populists like Webb are rare in today's Democratic Party, while the Republicans, for all their folksy rhetoric, offer nothing but the economic program of their Wall Street Journal/Club for Growth wing. If mass unemployment and slow growth persist for years, some sort of third-party, "Middle American" populist movement in 2012 seems possible. (Lou Dobbs: tanned, rested and ready?)

Could a new wave of populist independents be steered into the Democratic Party? Alas, that seems unlikely, if Democrats are viewed as the compromised, establishmentarian governing party. Moreover, the Republican Party benefited from the last two populist upheavals. Richard Nixon built the generation-long hegemony of the Republicans on the anger of George Wallace voters, and, following the campaign of Ross Perot in 1992, Newt Gingrich captured anti-system reformism to build a Republican congressional majority for most of the period between 1994 and 2006.

In each case, liberals and progressives indiscriminately rejected the populist voters. The Wallace voters, most of whom were New Deal Democrats, were dismissed by most liberals as though they were motivated by nothing but opposition to racial integration. In 1992 the New Republic published an idiotic cover with Perot dressed as Mussolini, implying that he and his supporters were crypto-fascists. Today ridicule of the bombastic Sarah Palin shades all too easily into loathing for the lower middle class.

It would be much easier for the Republicans to rebuild the conservative-populist coalition that dominated American politics from 1968 to 2006 than it would be for the Democrats to rebuild the kind of liberal-populist coalition of the New Deal era from 1932 to 1968. Will the Democrats be marginalized a third time rather than empowered by anti-system populism? In the next few election cycles we may find out.