Pastors are invoking Psalm 109 -- "May his days be few" -- in hopes of saving our country, and our souls 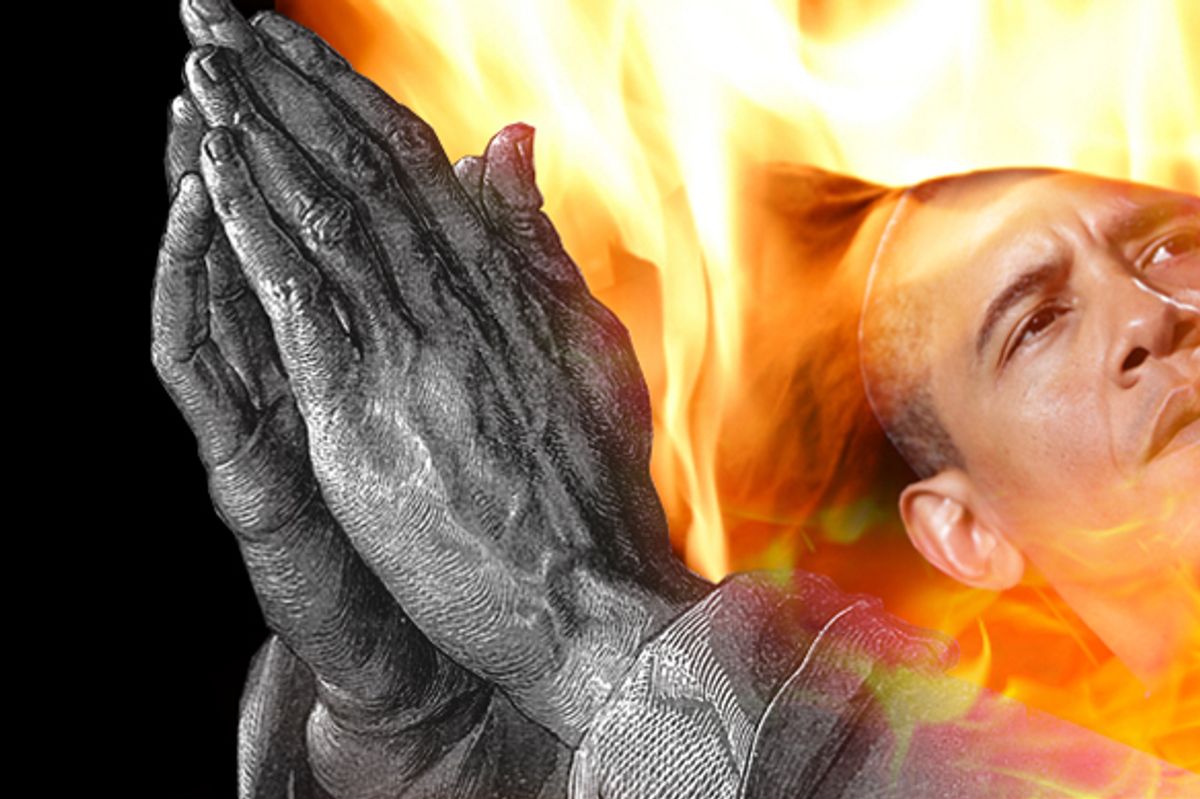 Pastor Wiley Drake preaches on most Sundays in a church tucked in between California’s big amusement parks, a place some people refer to as "Wiley World."

“Ladies and gentlemen,” Drake said as he addressed the group of about 60 gathered in Buena Park that evening, just down the street from Knott’s Berry Farm. “If they’re a Muslim, they’re a danger to this country.”

Statements like these are a dime a dozen in “Wiley World.” Political correctness isn’t a concern to Drake. And yet, his assertions about Muslims are far from his most controversial. What has garnered him the most media attention is what he said to national radio talk show host Alan Colmes in June.

“Are you praying for his death?" Colmes asked Drake, referring to President Obama. "Yes," Drake replied. "So you're praying for the death of the president of the United States?" Colmes asked. "Yes." "You would like for the president of the United States to die?" Colmes asked once more. "If he does not turn to God and does not turn his life around, I am asking God to enforce imprecatory prayers that are throughout the Scripture that would cause him death, that's correct."

Drake says he regrets the media frenzy caused by the Colmes interview, but he stands by his use of imprecatory prayer, a form of prayer he says is biblically mandated -- an appeal to God that is, unlike most prayers, a request not for something positive but for misfortune, a kind of curse meant to fall on those considered evildoers.

With his gray hair slicked back and a slightly pinkish complexion, Drake sported suspenders and glasses as he explained that his decision to use imprecatory prayers stemmed from a desire to better organize his early morning telephonic prayer meetings. Drake decided praying the Psalms would be one way of redirecting these sessions. But soon, he came to Psalm 109: “May his days be few; may another take his place of leadership. May his children be fatherless, and his wife a widow.”

"That’s the one that got me in trouble," Drake says now.

The problem is that Drake began to recite this prayer, and others like it, while keeping certain people in mind. In the case of Psalm 109? President Barack Obama.

But Drake is far from alone in his use of imprecatory prayers. Pastor Steve Anderson of Faithful World Baptist Church in Tempe, Ariz., also incorporates this form of prayer in his worship. In fact, Frederick Clarkson of Religion Dispatches surmises that Anderson inspired one regular attendant of Faithful World Baptist, 28-year-old Chris Broughton, to show up to a speech by the president with two guns in hand when he issued the following sermon:

"You’re going to tell me that I’m supposed to pray for the socialist devil, murderer, infanticide, who wants to see young children, and he wants to see babies killed through abortion and partial-birth abortion and all these different things," Anderson said, referring to President Obama. "Nope. I’m not gonna pray for his good. I’m going to pray that he dies and goes to hell."

There are other signs imprecatory prayer is growing in popularity. Beliefnet’s Rabbi Brad Hirschfield writes that Psalm 109 is now a top Google search; it’s even inspired a line of bumper stickers and T-shirts that sinisterly read “Pray for Obama,” while pointing to the Psalm, and in particular, the passage that calls for an end to present leadership, though Gawker recently noted that CafePress, popular purveyor of homemade T-shirts, has stopped selling the items.

But what is it, exactly, that unites people who pray for the death of the president?

Most likely, it's a rabid antiabortion stance. Drake "prayed" for abortion doctor George Tiller, and reacted to Tiller’s murder by noting that his death was an answer to those prayers.

Drake insists this isn’t as evil as it sounds.

"I’m not for a Christian or anybody killing somebody," he told me. "That’s God’s business."

Tiller’s death, then, according to Drake, must have been God’s will, and his prayers simply aligned with God’s providence.

When speaking about Obama, Drake often refers to "baby killing." Anderson is also pro-life. And both men believe homosexuality is a sin -- views that fit neatly into not only certain religious camps but political parties as well.

Anderson is a member of the Constitution Party, which is, according to its own site, the third largest political party in the United States in terms of voter registration -- a party that is pro-life, pro-gun and anti-gay. The monthly newsletter, Ballot Access News, puts the party’s voter registration total at more than 400,000 or .44 percent. This is considerably less than the numbers Democrats, Republicans or Independents boast, but still greater than the numbers on record for the Libertarian Party or the Green Party. And Drake himself ran for vice-president of the United States on Alan Keyes’ 2008 ticket as a member of the American Independent Party, the California affiliate of the Constitution Party.

But aside from politics, there is the question of whether people who pray the Psalms in this manner stand on any kind of solid theological ground.

Stephen Chapman from Duke University’s Center for Jewish Studies says Jews and Christians inherited the tradition of imprecatory prayer from the Ancient Near East but used this form of prayer in a specific way: Imprecatory prayers were meant to remind the faithful of the covenant they held with God and the consequences that would follow if that covenant was broken.

Given the New Testament’s message of love and forgiveness, Christians in particular have struggled with what to do with the material ever since, says Chapman.

But Drake argues he’s in good company when it comes to imprecatory prayer. Both Martin Luther and John Calvin prayed this way, he says. Still, there have been other famous theologians, C.S. Lewis for one, who found these kinds of prayers distasteful. Present-day Hebrew scholar Walter Brueggemann has tried to find some kind of middle ground by arguing that the Psalms can serve as a kind of liturgical venting -- a psychological release from the pent-up anger and frustration life continually piles on us.

The Southern Baptist Convention has distanced itself from imprecatory prayer, though Drake himself once served as the SBC’s vice-president; SBC president Dr. Johnny Hunt has called imprecatory prayer unbiblical. But this is where, in a sense, Drake is right and others are wrong. Prayers calling for the downfall of our enemies can be found in the Bible, there’s no arguing that. But the question is: What do we do with the text now?

This isn’t an easy question to answer. Though Drake’s or Anderson’s actions may strike most of us as plainly and abhorrently wrong, same-sex marriage no doubt strikes Drake as decidedly wrong. That's yet another conviction upheld with the help of biblical text, and which is, no matter what fundamentalists argue, clearly open to interpretation. It’s a reality that not even historical context can save us from, and the danger that comes when considering a text as beautifully complicated as the Bible sacred.

But discrediting people like Drake or Anderson should remain a priority, even for those of us who don’t believe in the power of prayer, because in these instances prayer is tantamount to hate speech -- an act of violence that the First Amendment makes difficult to do anything about in the United States. Drake has just recently lifted his call for imprecatory prayer against the president, but only because he wants Obama to live long enough to stand trial for treason. Drake continues to argue that Obama is not a U.S. citizen and that his claim to the presidency is illegitimate as a result. But Drake is no doubt using imprecatory prayers on others, and one look at the evidence screams he’s not alone.