Police to talk to Woods 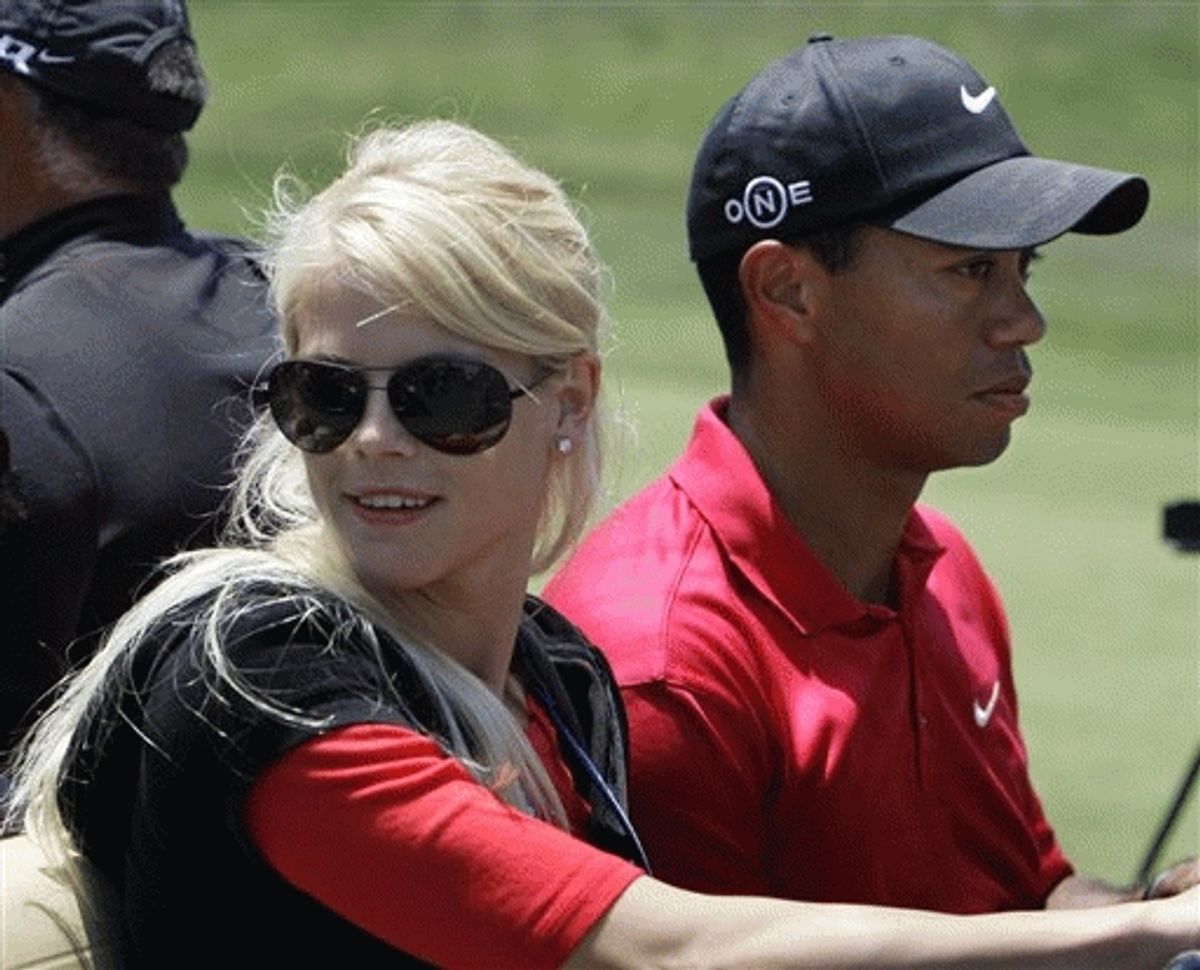 FILE - Tiger Woods' wife, Elin Nordegren, rides next to Woods after winning the US Open championship at Torrey Pines Golf Course on June 16, 2008.
--

There are plenty of vivid details from the car crash that sent Tiger Woods to the hospital:

His SUV hit a fire hydrant and a tree; his lips were cut and he had blood in his mouth; his wife smashed a rear window with a golf club to get him out; he briefly lost consciousness.

There are also plenty of questions, among them:

Where was he going at 2:25 a.m. Friday? Why was there no word from the Woods' camp for nearly 13 hours after the accident?

Police hope Woods can answer some of them Saturday.

Two troopers tried to talk to the world's No. 1 golfer Friday evening, but his wife said he was sleeping and they agreed to come back Saturday, Florida Highway Patrol Sgt. Kim Montes said.

According to the patrol, Woods had just left his Florida mansion when he lost control of his 2009 Cadillac and hit a fire hydrant, then a tree on his neighbor's property. The report said alcohol was not a factor.

The patrol reported the accident occurred at 2:25 a.m. Friday morning and classified the injuries as serious. The first word from Woods' camp -- some 13 hours after the crash -- was that it was a "minor accident," and he was in good condition after being treated and released.

Windermere police chief Daniel Saylor said his two officers found the 33-year-old Woods lying in the street with his wife, Elin, hovering over him.

"She was frantic, upset," Saylor said in a briefing Friday night. "It was her husband laying on the ground."

Saylor said Woods' wife told officers she was in the house when she heard the accident and "broke the back window with a golf club." He said the front-door windows were not broken and that "the door was probably locked."

"She supposedly got him out and laid him on the ground," he said. "He was in and out of consciousness when my guys got there."

Saylor said Woods had lacerations to his upper and lower lips, and blood in his mouth; officers treated Woods for about 10 minutes until an ambulance arrived. Woods was conscious enough to speak, though the police chief said Woods didn't say anything coherent.

In a telephone interview, Woods' father-in-law, radio journalist Thomas Nordegren, told The Associated Press in Stockholm that he would not discuss the accident.

"I haven't spoken to her in the last few ... " Nordegren said about his daughter, Elin, before cutting himself off. "I don't want to go into that."

Damage to the front of Woods' SUV was described by Saylor as "not real extensive, but not real light."

Left unanswered was where Woods was going at that hour. His agent, Mark Steinberg, and spokesman Glenn Greenspan said there would be no comment beyond the short statement of the accident posted Friday afternoon on Woods' Web site that said:

"Tiger Woods was in a minor car accident outside his home last night. He was admitted, treated and released today in good condition. We appreciate very much everyone's thoughts and well wishes."

Asked at an evening news conference if the couple could have been arguing, Saylor said he had no knowledge of that. The couple, married five years, have two children.

The accident came two days after the National Enquirer published a story alleging that Woods had been seeing a New York night club hostess, and that they recently were together in Melbourne, where Woods competed in the Australian Masters.

The woman, Rachel Uchitel, denied having an affair with Woods when contacted by the AP.

"I resent my reputation is getting completely blasted in the media," she said during a telephone interview late Friday. "Everyone is assuming I came out and said this. This is not a story I have anything to do with."

Uchitel said she was in Melbourne two weeks ago with clients and never saw Woods the entire time she was there.

"Right now we believe this is a traffic crash," Montes said. "We don't believe it is a domestic issue."

The Florida Highway Patrol said tapes of the 911 call won't be released until they can be reviewed, probably Monday at the earliest. Montes said the accident report was not issued for 12 hours because it did not meet the criteria of a serious crash, and the FHP only released information because of inquiries from local media.

Woods, coming off a two-week trip to China and Australia earlier this month, is host of the Chevron World Challenge in Thousand Oaks, Calif., which starts Thursday. He is scheduled to have his press conference Tuesday afternoon at Sherwood Country Club. Steinberg said he did not know if Woods planned to play next week.

Woods rarely faces such private scrutiny, even as perhaps the most famous active athlete in the world.

He usually makes news only because of what he can do with a golf club. Few other athletes have managed to keep their private lives so guarded, or have a circle of friends so airtight when it comes to life off the course.

Woods' $2.4 million home is part of an exclusive subdivision near Orlando, a community set on an Arnold Palmer-designed golf course and a chain of small lakes. The neighborhood, which is fortified with high brick walls and has its own security force, is home to CEOs and other sports stars such as the NBA's Shaquille O'Neal.

Woods has won 82 times around the world and 14 majors, becoming the first player of black heritage to win a major at the 1997 Masters when he was 21. He attended the Stanford-Cal football game last Saturday, where he tossed the coin at the start of the game and was inducted into Stanford's sports Hall of Fame at halftime.

He won six times this year after missing eight months recovering from reconstructive surgery on his left knee. Even though he failed to win a major, Woods said he considered this a successful year because he did not know how his knee would respond.