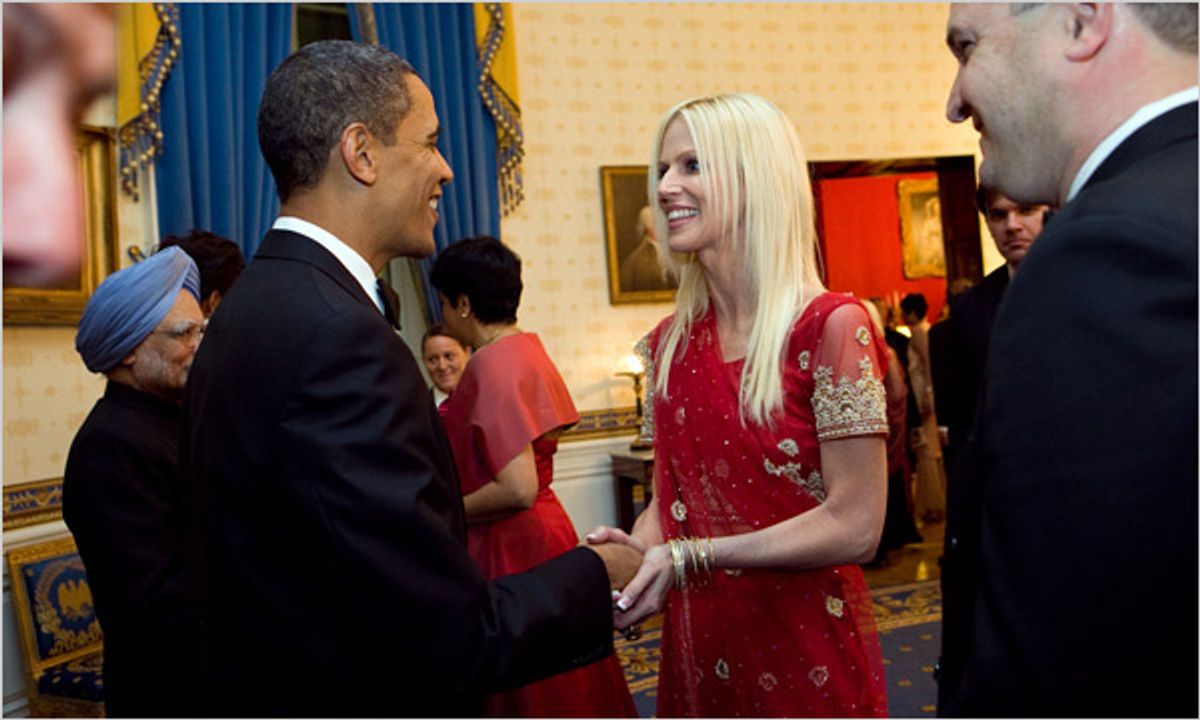 This time, the picture is the story.

After the Secret Service insisted that President Barack Obama was never endangered by a security breach that allowed a couple to crash his first state dinner, the White House has released a photo showing that not only did the pair get close to Obama, they actually shook hands and talked to him.

As the White House was disclosing that the Virginia couple, Michaele and Tareq Salahi, met Obama in the receiving line, a "deeply concerned and embarrassed" Secret Service on Friday acknowledged that its officers never checked whether the two were on the guest list before letting them onto the White House grounds.

The White House released a photo showing the Salahis in the receiving line in the Blue Room with Obama and Indian Prime Minister Manmohan Singh, in whose honor the dinner was held. Obama and reality TV hopeful Michaele Salahi are smiling as she grasps his right hand with both of hers and her husband looks on. Singh is standing to Obama's left.

The Secret Service earlier this week had said the president was not in danger because the couple -- like others at the dinner -- had gone through magnetometers. But in light of their close proximity to the president, no such claim was made Friday.

The Salahis were not on the guest list and should have been barred from entering last Tuesday's dinner on the White House South Lawn for the prime minister of India, said Secret Service Director Mark Sullivan.

Sullivan said the agency that protects the president is "deeply concerned and embarrassed" that procedures were not followed.

"As our investigation continues, appropriate measures have been taken to ensure this is not repeated," Sullivan said in a written statement.

"The preliminary findings of our internal investigation have determined established protocols were not followed at an initial checkpoint, verifying that two individuals were on the guest list," Sullivan said. "Although these individuals went through magnetometers and other levels of screening, they should have been prohibited from entering the event entirely. That failing is ours."

Earlier, Mackin said the Secret Service may pursue a criminal investigation of the Salahis.

Sullivan said it wasn't good enough that his agency screened more than 1.2 million visitors last year to the White House complex and protected more than 10,000 sites for the president, vice president and others.

"Even with these successes, we need to be right 100 percent of the time," he said.

It is unclear what the couple told officers at the checkpoint that allowed them to go through the security screening. Federal law makes it a crime to knowingly and willfully falsify statements on matters within the federal government's jurisdiction.

"As this moves closer to a criminal investigation there's less that we can say," Mackin said. "We're not leaving any option off the table at this point."

"The men and women of the Secret Service put their lives on the line everyday to protect us. They are heroes and they have the full confidence of the president of the United States," Shapiro said.

The Salahis lawyer, Paul Gardner, posted a comment on their Facebook page saying, "My clients were cleared by the White House, to be there." He said more information would be forthcoming. Several messages left at Gardner's law firm on Friday were not returned.

Bravo Media has confirmed that Michaele Salahi is being considered as a participant in the upcoming "The Real Housewives of D.C." program and on the day of the dinner was being filmed by Half Yard Productions, the producer of the program.

Photos on the couple's Facebook page they previously had gotten close to Obama. One photo, apparently taken in the days before Obama took the oath of office, shows the Salahis in a group shot with Obama and some of the musicians who performed at an inaugural concert.

Other photos show the Salahis in the empty, glass-enclosed box from which the Obamas watched the concert and, according to the caption, "backstage with the Secret Service at the Lincoln Memorial during the Presidential Inauguration."