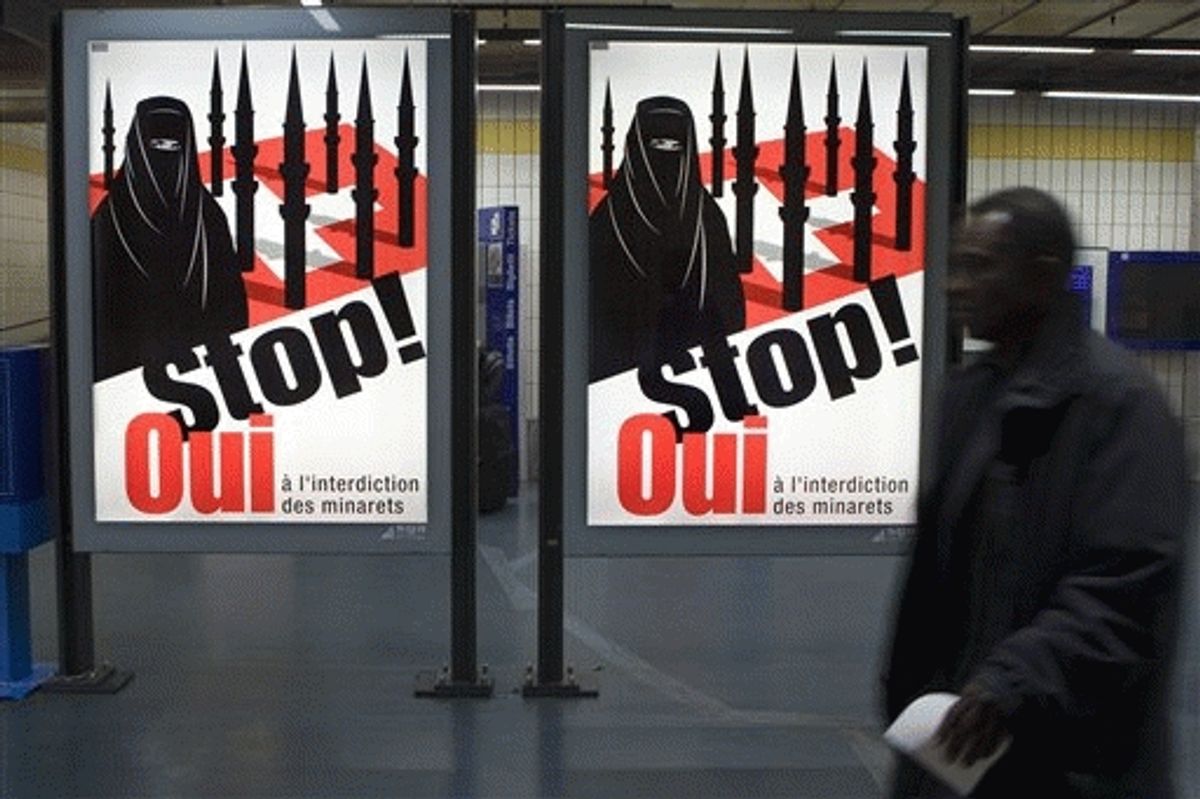 FILE - A man passes by a poster of the right-wing Swiss People's Party which shows a woman wearing a burqa against a background of a Swiss flag upon which several minarets resemble missiles at the central station in Geneva, Switzerland.
--

Swiss voters approved a move to ban the construction of minarets in a Sunday vote on a right-wing initiative that labeled the mosque towers as symbols of militant Islam, projections by a widely respected polling institute showed.

The projections based on partial returns say Swiss swung from only 37 percent supporting the proposal a week ago to 59 percent in the actual voting.

Claude Longchamp, leader of the widely respected gfs.bern polling institute, said the projection contracted by state-owned DRS television forecasts approval of the initiative by more than half the country's 26 cantons, meaning it will become a constitutional amendment.

The nationalist Swiss People's Party describes minarets, the distinctive spires used in most countries for calls to prayer, as symbols of rising Muslim political and religious power that could eventually turn Switzerland into an Islamic nation.

Muslims make up about 6 percent of Switzerland's 7.5 million people. Many Swiss Muslims are refugees from the Yugoslav wars of the 1990s. Fewer than 13 percent practice their religion, the government says, and Swiss mosques do not broadcast the call to prayer outside their buildings.

"Forced marriages and other things like cemeteries separating the pure and impure -- we don't have that in Switzerland, and we do not want to introduce it" said Ulrich Schlueer, co-president of the Initiative Committee to ban minarets.

The move by the People's Party, the country's largest party in terms of popular support and membership in parliament, is part of a broader European backlash against a growing Muslim population. It has stirred fears of violent reactions in Muslim countries and an economically disastrous boycott by wealthy Muslims who bank, shop and vacation in Switzerland.

Taner Hatipoglu, president of the Federation of Islamic Organizations in Zurich, said, "The initiators have achieved something everyone wanted to prevent, and that is to influence and change the relations to Muslims and their social integration in a negative way."

Hatipoglu said if in the long term the anti-Islam atmosphere continues, "Muslims indeed will not feel safe anymore."

The seven-member Cabinet that heads the Swiss government has spoken out strongly against the initiative, and local officials and rights defenders objected to campaign posters showing minarets rising like missiles from the Swiss flag next to a fully veiled woman.

The People's Party has campaigned mainly unsuccessfully in previous years against immigrants with campaign posters showing white sheep kicking a black sheep off the Swiss flag and another with brown hands grabbing eagerly for Swiss passports.

The four minarets already attached to mosques in the country are not affected by the initiative.

Geneva's main mosque was vandalized Thursday when someone threw a pot of pink paint at the entrance. Earlier this month, a vehicle with a loudspeaker drove through the area imitating a muezzin's call to prayer, and vandals damaged a mosaic when they threw cobblestones at the building.