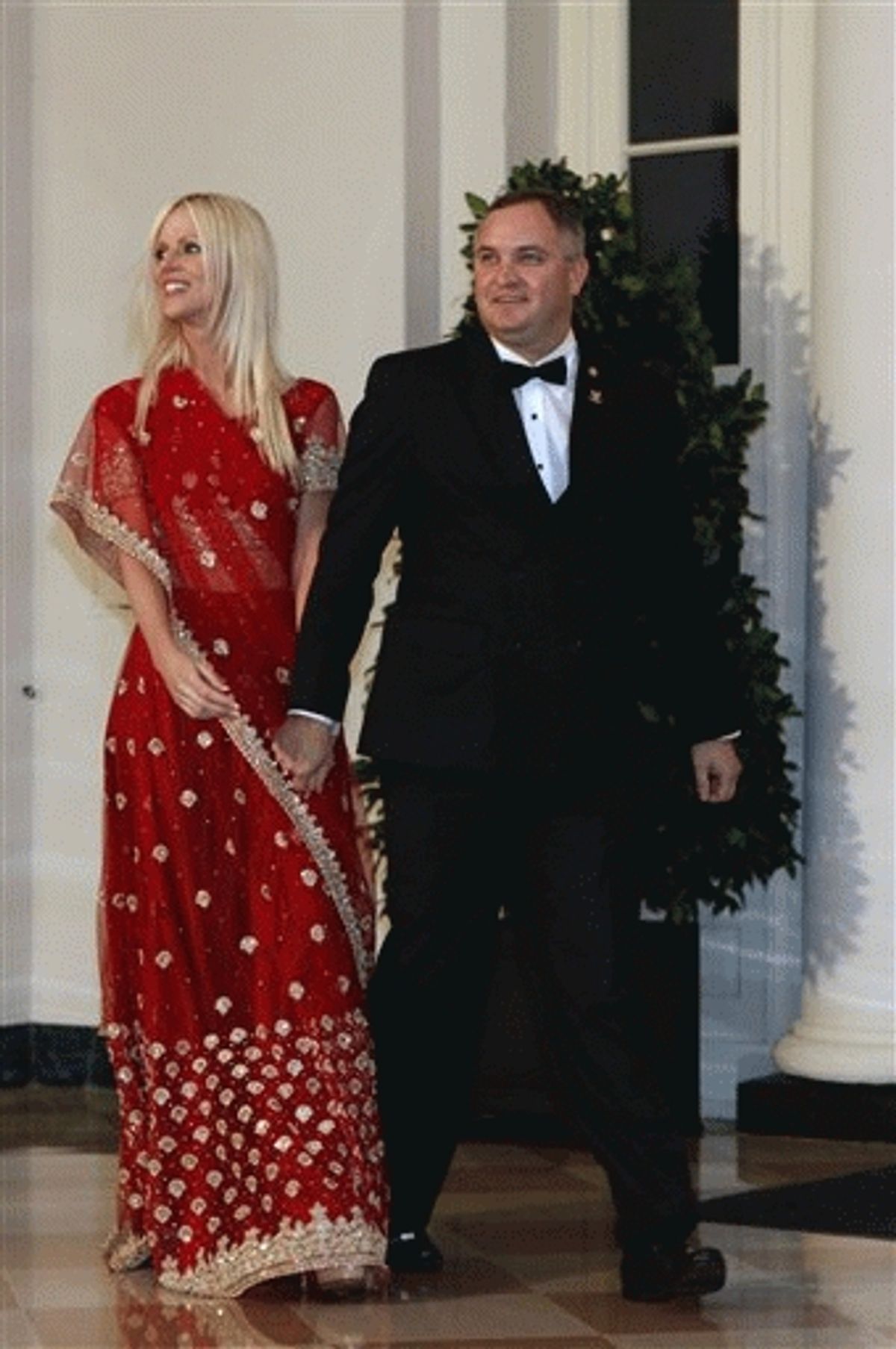 The couple who crashed President Barack Obama's first state dinner are peddling their story to broadcast networks for hundreds of thousands of dollars, a television executive says.

The executive, who spoke on condition of anonymity because the network does not publicly discuss bookings, told The Associated Press that representatives for Michaele and Tareq Salahi contacted networks to urge them to "get their bids in" for an interview. The executive said the Virginia couple was looking for a payment in the mid-six figures range.

Meanwhile, CNN confirmed that the Salahis had canceled an appearance they had scheduled for "Larry King Live" on Monday.

Network news divisions say they don't pay for interviews. But for eagerly sought interviews in the past, they have offered to pay for access to exclusive material, such as pictures or videos from their subjects.

Representatives for the couple did not immediately return telephone and e-mail requests for comment.

Michaele Salahis is a reality TV hopeful trying to get on Bravo's "The Real Housewives of D.C." Her and her husband's success in getting into the state dinner Tuesday without an invitation embarrassed the White House and Secret Service.

The agency acknowledged its officers never checked whether the couple were on the guest list before letting them onto the White House grounds. But it initially insisted Obama was never endangered by the security breach because the couple -- like others at the dinner -- had gone through magnetometers.

When it became clear the couple had interacted with Obama and Vice President Joe Biden during the event, Secret Service Director Mark Sullivan expressed concern and embarrassment. He said that while an investigation continues, the agency has taken measures to ensure the oversight is not repeated.

A White House photo showed the Salahis in the receiving line in the Blue Room with Obama and Indian Prime Minister Manmohan Singh, in whose honor the dinner was held. Obama and Michaele Salahi are smiling as she grasps his right hand with both of hers and her husband looks on. Singh is to Obama's left.

On Saturday, Rep. Edolphus Towns, D-NY, who chairs the House Oversight and Government Reform Committee, called for a review of Secret Service practices and asked for a briefing this week.

Agency spokesmen declined to comment on reports that agents had visited the Salahis' vineyard in Hume, Va., in search of the couple. Voice mail messages left Saturday at two separate telephone numbers for the Oasis Winery, south of Washington, were not immediately returned.

It is unclear what the couple told officers at the checkpoint that allowed them to go through the security screening. The Salahis lawyer, Paul Gardner, posted a comment on their Facebook page saying his clients were cleared by the White House to be at the dinner.