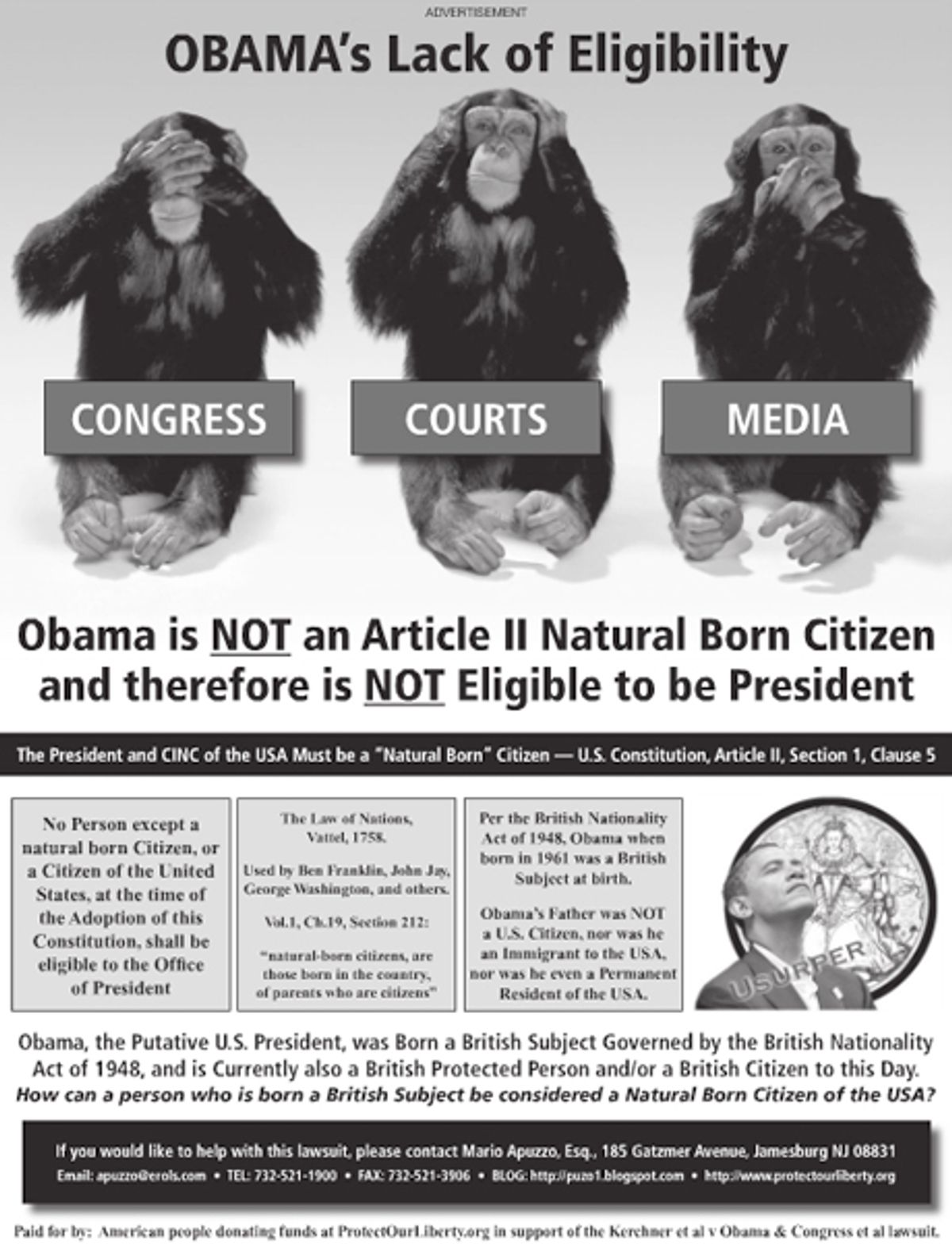 The Birthers may be shut out of most media outlets -- it's a conspiracy! -- but the Washington Times is apparently still happy to take their money, even if it means running erroneous advertisements that barely even flirt with the borders of reality. Monday's Times, for instance, featured a Birther ad (an image of it accompanies this post) that declares President Obama ineligible for his job not because of where he was born, but to whom.

The ad depicts three monkeys ignoring what some Birthers believe are the facts of the situation; Congress is seeing no evil, the courts are hearing none, and the media is speaking none. It declares "Obama is NOT an Article II Natural Born Citizen and therefore is NOT Eligible to be President," and asks for plaintiffs to join in lawsuits spearheaded by the people who took out the ad.

The problem? Beyond the fact that "Article II Natural Born Citizen" appears to be a term made up out of thin air, those responsible for the ad don't have a leg to stand on, legally. First off, they can get as many plaintiffs as they want; they still won't be able to show standing -- a particularized injury, basically -- and that means the suit will get tossed, and fast. Second, the Birthers have just decided that their interpretation of what the Founding Fathers meant when they said in the Constitution the president had to be a natural born citizen is the correct one, courts be damned. And they're wrong.

I've gone into this before, so to make a long story short: The Birthers believe that, in order to be a "natural born citizen," you have to be born in the U.S. to two citizen parents. Obama's father was a British citizen. As a result, Obama was a dual citizen at birth, and that, according to the Birthers, makes him ineligible for the presidency. They have seized upon "The Law of Nations," a text by Swiss philosopher Emerich de Vattel that appears to agree with their interpretation, and decided that its word is law. There are some issues with that -- first of all, they're relying on a translation produced after the Constitution was written. Before that, de Vattel's work didn't support the Birthers -- it didn't even contain the term "natural born citizen."

Beyond that, books by Swiss philosophers aren't binding upon U.S. courts. British common law, however, is an important source of American law, and it indicates that if your parents are residing in the U.S., just being born here to is enough to make you a natural born citizen. That, at least, is the view the Supreme Court took in the 1898 case of U.S. v. Wong Kim Ark. Because the case wasn't really about that issue, and the discussion of natural born citizenship was a digression, today's courts wouldn't be bound by that opinion -- but they'd certainly give it quite a bit of weight, more than any ad in the Times would get.

(Hat-tip for the ad to Think Progress.)