At 34 years old, I finally feel like a popular seventh-grader. How sad is that? 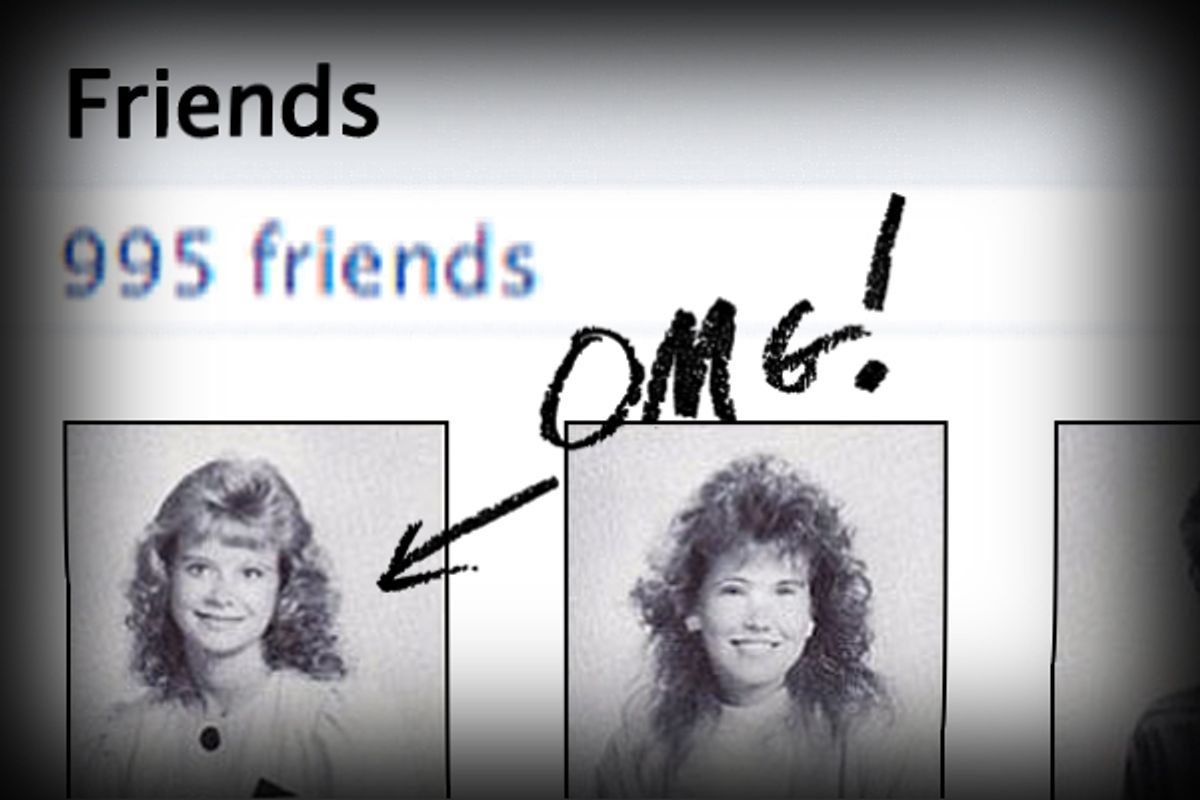 I sit at my computer and wait for Barbara, who once poured yogurt on my head in front of the entire field hockey team, to tell me the details of her breakup with her current boyfriend. While I wait, I chat with Alison, who, years ago, stole my pants during gym and cut a hole in the crotch area, and who needs advice on how to sleep-train her baby. Still, while all this is going on, I play online Scrabble with Rachel, who, when I was 12, told everyone I had faked getting my period for attention.

I am someone with a life. I have a career, a son, a husband, an active volunteer life, and many current and real-life friendships that need maintenance. I have a work deadline in three hours, plus dinner isn’t ready. The laundry remains unlaundered. Why, then, am I sitting at my computer, concerned to distraction over the activities of the people who were cruelest to me during my formative years?

They weren’t always horrible to me. I loved fifth and sixth grades. I had a clique of friends, complete with secret nicknames, passed notes, knowing looks, friendship bracelets, friendship pens, friendship songs. We moved through the school as a group and took turns slumber-partying at each other’s houses.

We traded the title "best friend" regularly among different pairings in our group. Nancy and Barbara had spent two weeks together in Nantucket over the summer, and though Nancy and I had been best friends prior to that, apparently they had decided that their time had come to be best friends. They made this announcement to me via conference call the week before school started. I took it OK; after all, I’d been meaning to get to know Amy better.

Late in sixth grade, something changed, and I wasn’t a part of it. One day, all my friends came in with matching training bras. “I didn’t know we were getting bras,” I said. They looked at each other, a shared glance I used to be on the comfy side of, and my heart sank with the unspoken answer: We weren’t. They were.

Seventh grade began, and I found out we had grown out of things like changing best friends. I met a girl named Emily who had transferred to our school. After a good day of getting to know her, I asked if she wanted to be best friends. “You’re such a loser,” she spat. I looked around one day, and my group of friends had wandered away. Adults like to generalize and say things like, “Aren’t kids cruel?” But we kids, the ones who are left out in the cold, have a role in what happens to us. Not necessarily a fair one, but the facts of our unpopularity are not mysterious. We get fat, we say the wrong thing, we wear outdated clothing. Me, I was too needy. Long after my friends stopped needing superlative titles to know how much they meant to each other, I still did.

I did not go quietly into that lonely and unpopular night. Each morning, I tried to assume a casual air of friendship. Big mistake. My efforts backfired, and my former friends’ apathy toward me turned to hatred. Soon, I was not just ignored at school. I was tripped as I came out of the shower. People made flatulent noises when I sat down in class. My locker was magic-markered with the word "loser." We are tempted to remember this behavior and make light of it. Oh, it couldn’t have been that bad, we said. But I remember it well. It was that bad.

Now, all these years later, there’s Facebook, allowing us to put the past to rest, to erase the mystery that used to be inherent in the subject of wondering whatever happened to those people you once knew.

After accumulating college friends and ex-boyfriends, as we all do when we join Facebook, I took a chance and looked up Barbara. With the nervousness that accompanied me on every bus trip to school following my fall from grace, I pressed the button that would send her a friend request. Immediately, I received confirmation: She had agreed, finally, to be my friend. Brave now, I found Alison, then Amy, then Nancy. I was euphoric. Here I am, back in the inner sanctum. I sort through their pictures, their posts, their lives. I cheer their triumphs, their babies’ birthdays, photos from their ski trips. I cobble together the story of how life has been since we knew each other, deliberately, forcefully forgetting how it was we parted.

I check their updates and their statuses with eagerness each day. Like an addict, I am euphoric when I am practicing my addiction, remorseful and self-hating when I’m not. I am shocked at how easily I have forgiven these people. I am filled with the warm light of acceptance; I am wrapped in the cozy blanket of belonging.

In my imagination, my old clique’s renewed friendship tells me that they know they were wrong, that they were just being cruel. They’re sorry, they say with every LOL or emoticon. We were wrong, they say when they press the "like" button on my status update. If I’m honest, I bet they don’t think about it. I bet they regard me as a name that is familiar -- a new person in their lives, more than an old one.

There is no way to go back in time and undo things -- not the insults, not the humiliations. We can pretend some events never happened, though we are always still a little plagued. But, sometimes, we can also find a way to make what happened in the past right. I’m not saying you can do that with everything that haunts your past. But some things, you can. Maybe the way women in the '90s took back the word "bitch," calling themselves and each other by the ugly slur so that it wouldn’t hold power when men said it, maybe that’s what I’m doing with my former friends.

Why do you need to be loved by people who rejected you a hundred years ago, asks my husband, though I have explained it. He believes I have Stockholm syndrome, that I have fallen in love with my torturers. I tell him that these are just old friends, that I’m over it, that it’s nice to be in touch with a piece of my past. But I’m not exactly over it, am I? What I am, though, is someone who has finally found a way to put my life’s ugliest social chapter to rest. Maybe I didn’t come by it the honest way -- through a true reckoning with my past, a fearless inventory of what happened that year and why I can't get over it. But who is to say that we shouldn’t try to find peace any way we can? Who says it always has to be so hard?

Whatever my intention was when I contacted my former friends, it’s different now. I no longer want validation; I no longer am testing the waters to see if they now find me worth their time. These women are not who I thought they’d be. They’re people having a hard time in the economy, people who are struggling through their days, their relationships. I don’t have enough in common with them to think that, had we not fallen out, our friendships would have survived. But here, now, I am someone who also struggles with these things. I have stretched across a social divide that was narrower than I thought, and I found community where I least expected it. Am I pathetic? Maybe. But what I also am, finally, is a popular seventh-grader. I think of my younger self, eating her lunch alone, wondering when this agony will be over. I wish I could tell her I haven't forgotten about her. I wish I could tell her I've made it OK.