We need massive, permanent federal investment in infrastructure and public services, not symbolism like a new WPA 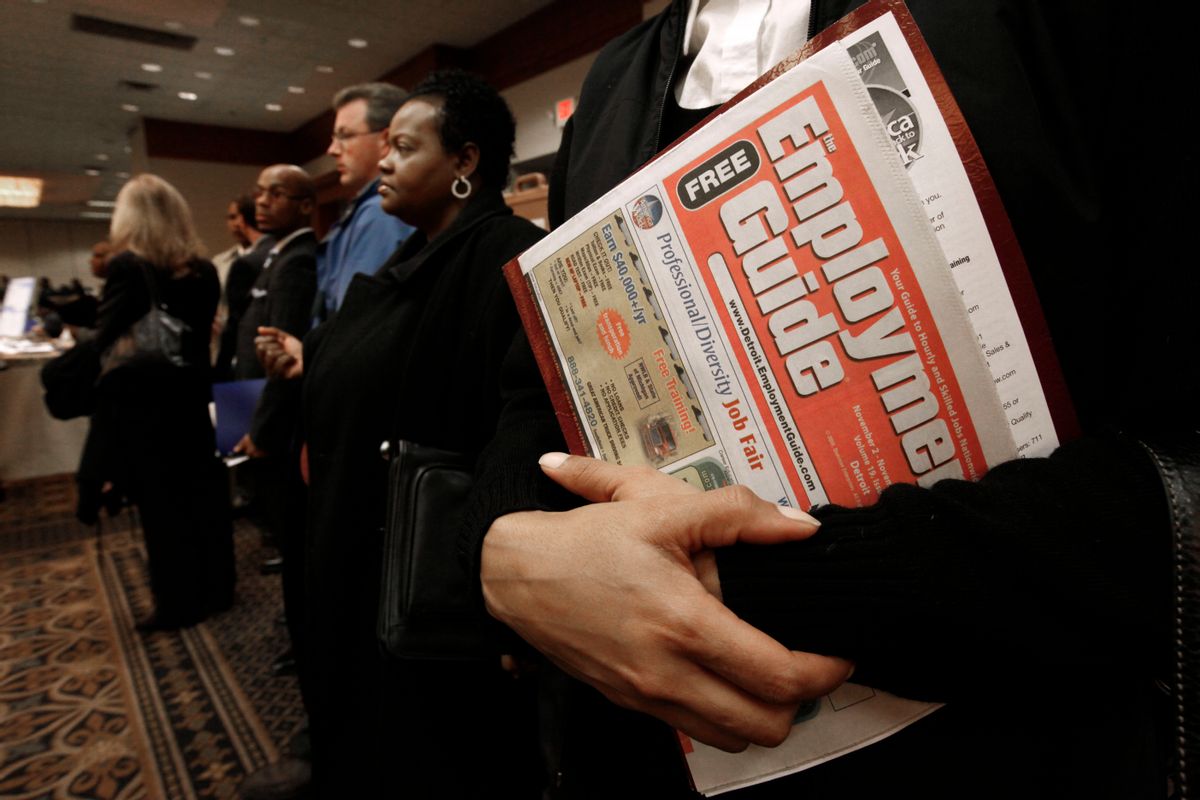 President Obama's jobs summit on Thursday is unlikely to produce a consensus about what, if anything, to do about the crisis of mass unemployment in America. Nevertheless, it is helpful because it focuses the attention of the public and Congress on the urgent need for policies to promote job creation in the United States rather than wait passively for the economy to shift to a "new normal" in which unemployment might be permanently much higher than in recent decades.

In addition, today's emergency provides an opportunity -- perhaps a passing one -- to rebuild the foundations of the U.S. job market and the economy on a long-term basis. But there is a real danger that politics as usual will result in an underfunded, gimmicky, feel-good jobs-creation program rather than one with the scope and structure that the country needs.

Progressives are right to insist on the need for more funding for state and local public services, in addition to the inadequate stimulus. Many states and cities are facing fiscal crises as a result of the collapse of the economy, and balanced-budget rules hobble their ability to borrow. In a crisis like this, it makes sense for the federal government to borrow money in order to bail out state and local governments for years in order to keep the schools, police and fire departments running.

On this issue, progressives are correct. But other progressive ideas about job creation deserve criticism from within the center-left, before they are prematurely adopted as the progressive program.

One such idea is a tax credit for employers who hire new workers. Proposed by Timothy J. Bartik of the W.E. Upjohn Institute for Employment Research, the tax credit is modeled on one used during the Carter years. While the Obama campaign touted a similar idea, a jobs tax credit was dropped from the stimulus package earlier this year because of skepticism both in Congress and the White House.

Skeptics argue that employers would game any new jobs tax credit -- for example, by claiming it for employees they would have hired anyway, in its absence. Even the best program is subject to manipulation, however, so this need not be a fatal objection. A more powerful criticism is that the problem with the economy is the lack of demand for the goods and services produced by businesses. Reducing the cost of labor is less important than generating adequate public and private demand.

The most persuasive objection, in my view, is the tendency of temporary tax credits to become permanent in Washington. I am sympathetic to the idea, but I can't imagine Congress ever repealing the tax credit once it is enacted. A new constituency for this tax subsidy will unite businesses, progressives and perhaps even conservatives in arguing for the extension of the new jobs tax credit, year after year, decade after decade. There is a case to be made for using tax relief to promote job creation -- more on that below -- but permanently saddling the tax code with another immortal tax credit for business should be avoided if there are better ideas.

Another idea that appeals to many people is a revival of New Deal-style public works programs, like the Works Progress Administration and Civilian Conservation Corps. Many of these programs left lasting legacies, such as scenic parkways and trails and facilities in national parks. But even admirers of the New Deal (I am one) concede that public works programs had only a limited effect on mass unemployment, which ultimately was cured by the mobilization of the economy by the federal government in World War II.

In today's environment, in which deficit hawks are screeching about trillion-dollar deficits, can anyone imagine Congress funding a federal public works program that would be more than symbolic? Even Paul Krugman calls for "a small-scale version of the New Deal's Works Progress Administration" -- which was itself small-scale.

The problems with the neo-WPA approach are not limited to scale. Such federal programs might well turn into permanent jobs programs for the poor -- and because the poor are disproportionately black and Latino, such programs would instantly become targets in racialized class-war politics. If the federal work program, like the new jobs tax credit, became permanent, then it would be the gift that keeps on giving for conservative demagogues denouncing "make-work" programs for the 21st century equivalent of "welfare queens."

Is there a better way? I think there is. We need to think big, for a change. Instead of bribing companies to create jobs they might have created anyway, and instead of creating entirely new federal programs that can be stigmatized as make-work programs for the poor, the federal government should expand public investment in infrastructure and public employment in state and local health, education and other essential services.

As part of the stimulus, Congress authorized new federal subsidies for state and local bonds to pay for infrastructure. An infrastructure program on the colossal scale that is needed, however, should be funded by federal debt with projects chosen by a national infrastructure bank of the kind that candidate Obama favored during the campaign.

In addition to large-scale public investment, we need large-scale public employment -- in the long run, not just the short run. The federal government should adopt a revenue-sharing program to subsidize a permanent expansion of state and local services. In order to reassure taxpayers that the money is not being wasted on back-office bureaucrats, federal subsidies to state and local public employment should go chiefly to front-line workers in public services that enjoy widespread public support.

Because many of these jobs would be middle-class jobs, the program could not be stigmatized as make-work for the poor. And if anti-government conservatives want to argue that there are too many police officers, fire department officials, teachers and nurses and not enough private-sector mall security guards, nannies and lawn tenders -- well, that is a debate that progressives and centrists should encourage.

Increased federal funding for police, emergency responders, nurses and teachers at the local level should be designed to become permanent. The effects of permanent revenue-sharing on the economy would be beneficial. For one thing, the "permanent stabilizers" in the U.S. economy would be expanded. If one part of the country boomed while another declined, federal money flowing from one region to another could keep up the level of public services everywhere, maintaining the health of the entire national economy.

An added benefit: Targeted revenue-sharing would even out the differences in quality between high-income states and regions and low-income states and regions, so that poor states like New Mexico and Mississippi did not have to have high tax rates to raise little revenue, compared to rich states like Connecticut. Best of all, state and local public-sector job creation could create tight labor markets and drive up wages for private sector workers.

Here, then, are two non-gimmicky, non-cheap ideas for addressing the jobs crisis: massive, permanent funding of infrastructure, and a permanent federally funded expansion of important state and local services like education and healthcare.

How is all this to be paid for? Like all of the industrial nations, the U.S. has been forced to engage in massive deficit spending during this crisis. Those who don't acknowledge the need for this are economic illiterates. The federal government should not raise taxes until the economy is stronger, for fear of plunging the economy back into recession -- the mistake made by FDR and Congress when they raised taxes prematurely in 1937.

In the long run, however, new revenue is needed, to pay down the national debt to moderate and sustainable levels, to fund Social Security and Medicare and perhaps new health spending (once healthcare cost inflation is controlled) and, maybe, to pay for the targeted federal revenue-sharing outlined above. A growing number of experts, including conservatives like Bruce Bartlett, agree that the U.S. needs to adopt a value-added tax, a national consumption tax that already is used by every other industrial democracy.

Most economists concur that a VAT generates great amounts of revenue with little economic distortion, compared to income and payroll taxes. And the regressive nature of the VAT can be mitigated by exempting some necessities from taxation and by reducing other taxes that fall disproportionately on wage earners, such as the payroll tax.

Together, these three proposals add up to one possible program for job creation -- public investment in infrastructure, new federal revenue-sharing to create state and local jobs in education, healthcare and other essential services, and cuts in the payroll tax and corporate income tax, paid for in the future by a federal VAT. Any short-term job creation program is likely to become permanent, simply as a result of politics. This program is designed to become permanent. The same elements that would help short-term recovery would also promote long-term growth.

My guess is that the White House and Congress, in response to high unemployment, will choose cheap, feel-good gimmicks over serious programs to expand job creation and growth in both the short and the long run. Ever since Reagan, Congress, afraid of direct public spending for public priorities, has preferred to dole out symbolic, inadequate tax credits to businesses and individuals. We may end up with a jobs tax credit. It's better than nothing. But in a time of crisis and transformation, surely we can find a better national motto to inspire us than "It's better than nothing."