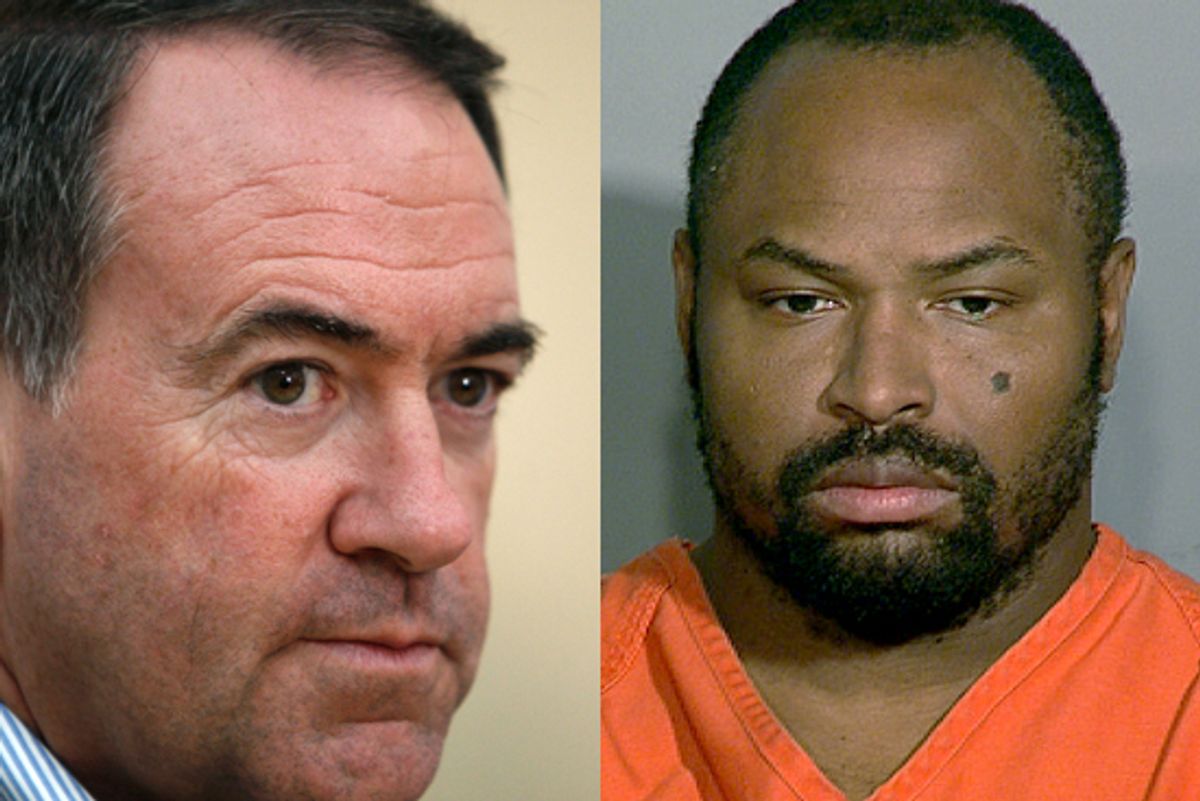 If clemency for Maurice Clemmons were the only fatal error committed by Mike Huckabee as governor of Arkansas, he might be able to shift blame to the state's law enforcement system and even run for president again in 2012. Yet the Clemmons commutation that he granted nine years ago is only one among several cases that raise serious questions about Huckabee's judgment.

Clemmons, the fugitive suspect in the shooting deaths of four police officers, was hit in the torso by return fire from one of the cops who later died, he escaped.

Having accumulated five felony convictions in Arkansas and at least eight felony charges in Washington, according to the Seattle Times, Clemmons was undoubtedly a danger to the community who ought to have been returned to prison long ago by law enforcement authorities. Only days before the police shooting, he was released on $150,000 bail from a jail in Pierce County, Wash., where he was incarcerated on charges of raping a child.

As Huckabee suggested in a statement released on Monday, courts and law enforcement agencies in Washington should probably share the blame for Sunday's carnage. "Should he be found to be responsible for this horrible tragedy, " the statement said, referring to Clemmons, "it will be the result of a series of failures in the criminal justice system in both Arkansas and Washington State."

In short, Huckabee was arguing, the killings attributed to Clemmons were not Huckabee's fault. Certainly they were not his fault alone. But this incident has revived memories of other decisions he made that later led to terrible consequences. The damage to his political future will hinge on how deeply news organizations now delve into those cases -- and the bizarre faith-based rationale behind his use of the clemency and pardon powers of the governor.

Huckabee has proudly declared on many occasions that he disdains the separation of church and state, insisting that his strict Baptist piety should serve as the bedrock of public policy. Nowhere in his record as governor was the influence of religious zeal felt more heavily than in the distribution of pardons and commutations, as his own explanations have indicated. During those years he granted more commutations and pardons than any governor during the previous four decades, many of them surely justified as a response to excessive penalties under the state's draconian narcotics laws. But others were deeply controversial, especially because so many of his acts of mercy appeared to depend on interventions by fellow Baptist preachers and by inmate professions of renewed Christian faith.

No doubt word spread among the prison population that the affable governor was vulnerable to appeals from convicts who claimed to be born again. Clemmons too was among those who benefited from Huckabee's tendency to believe such pious testimonials. "I come from a very good Christian family and I was raised much better than my actions speak," he explained in his clemency application in 2000. "I'm still ashamed to this day for the shame my stupid involvement in these crimes brought upon my family's name ... I have never done anything good for God, but I've prayed for him to grant me in his compassion the grace to make a start. Now, I'm humbly appealing to you for a brand new start."

Surely the most notorious instance of misplaced mercy involved Wayne Dumond, a rapist and murderer now deceased, who was originally sent to prison in Arkansas for raping a distant cousin of Bill Clinton. During Clinton's presidency the Dumond case became an obsession among certain right-wing pundits and politicians, who insisted that Dumond had been framed and brutalized by the "Clinton machine." When Huckabee became governor, he supported a parole for Dumond, winning applause from the Republican right -- until the former prisoner raped and killed a young woman in Missouri. Dumond later died in prison, under suspicion that he had murdered at least one other woman after his Arkansas release -- a tragic outcome for which Huckabee has repeatedly tried to blame others, including his two Democratic predecessors in the statehouse.

The real engine behind Dumond's release, however, was a Baptist minister and ultra-conservative ideologue named Jay Cole, who also happened to be a friend of Huckabee. Cole would tell the governor about his visits with the supposedly innocent Dumond, when the minister and the prisoner would read the Bible and pray together.

Perhaps the worst instance of that same syndrome, chronicled in detail by Arkansas journalists, concerned an Air Force sergeant named Glen Green, who was sentenced to prison for life after confessing that he had raped and killed a teenage girl. After beating the woman with nunchucks, he violated her almost lifeless body, ran over her with his car and buried her in a swamp. But yet another preacher friend of Huckabee's named Rev. Johnny Jackson somehow persuaded the governor that this incredibly brutal killing had been an "accident" -- and that Green had repented, come to Jesus and therefore should be freed.

Two years ago, I noted that Huckabee knew almost nothing about the Green case beyond what his preacher pal had told him. He consulted neither the prosecutor nor the victim's family, and overruled the dissent of his own parole board. After he announced that Green would be released, the furious public reaction forced him to reverse the decision. Yet he continued to release murderers and other violent criminals despite angry dissent from local prosecutors.

Huckabee granted mercy to prisoners whom he chanced to meet, to prisoners who had personal connections to him or his family, and especially to prisoners who were vouchsafed to him by the pastors he had befriended during his years as a Baptist minister and denominational leader. Among the thugs who benefited from his mercy was a robber who beat an old man to death with a lead pipe.

During the 2008 campaign, Huckabee's arrogance and stupidity mostly escaped the full scrutiny of the national press corps, in part because his stint as a contender was so brief. But next time, if there is a next time, he should get no such free pass -- and his claims to divine guidance ought to be thoroughly debunked.

Note: This story was updated after publication with news of Clemmons' reported death.