No one at the wheel in Afghanistan

A fraudulently elected president is presiding over an empty cabinet, while the parliament plays hooky 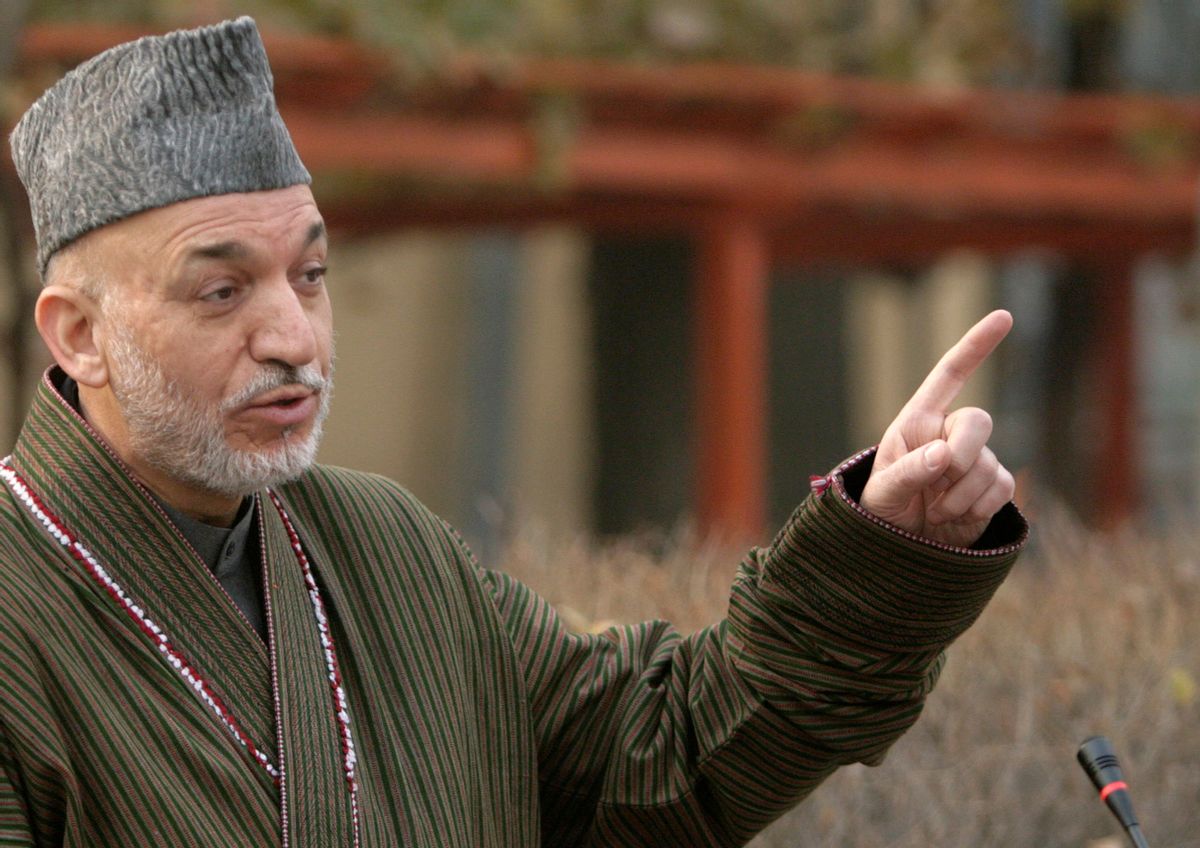 Afghanistan President, Hamid Karzai, addresses the media on the occasion of Eid al-Adha, at the Presidential Palace mosque in Kabul, Afghanistan, Friday, Nov. 27, 2009. In his message to mark the major Muslim holiday of Eid, Karzai said that "all our ... brothers who stand armed against their country," including the militant Islamic faction Hezb-e-Islami led by warlord Gulbuddin Hekmatyar, should help ensure stability and development in Afghanistan. (AP Photo/Mustafa Quraishi) (Mustafa Quraishi)
--

President Barack Obama's commitment to "finish the job" in Afghanistan by sending 55,000 U.S. troops to that country (counting the 21,000 he dispatched last winter shortly after being inaugurated) depends heavily on a hope of building up an Afghan government and army the U.S. can eventually turn control over to. But one of the questions we seldom hear any detail about concerns the country's governmental capacity. Does the government function? Can it deliver services?

As might be expected, governmental capacity is low, but here are some specifics. Months after the controversial presidential election that many Afghans consider stolen, there is no cabinet, and parliament is threatening to go on recess before confirming a new one because the president is unconstitutionally late in presenting the names. There are grave suspicions that some past and present cabinet members have engaged in the embezzlement of substantial sums of money. There is little parliamentary oversight. Almost no one bothers to attend the parliamentary sessions. The cabinet ministries are unable to spend the money allocated to them on things like education and rural development, and actually spent less in absolute terms last year than they did in the previous two years. Only half of the development projects for which money was allotted were even begun last year, and none was completed.

In other words, we can say of the Afghanistan government what Gertrude Stein said of her inability in later life to find her childhood home in Oakland, Calif.: "There is no there there."

President Hamid Karzai pleaded with the lower house of parliament on Monday to delay its winter recess by one week so that he can present his final cabinet nominees for confirmation, according to Pajhwok. Speaker of the House Yunus Qanuni sniffed that the parliament was responsible for setting its own recess, implying that he would not be strong-armed by the president. (Qanuni is a Tajik, formerly a leader of the Northern Alliance, and has long been a rival of Karzai, running against him in 2004; he was a counselor to Abdullah Abdullah, Karzai's main rival in the Aug. 20 presidential election).

But Qanuni seems to have been one of the few members of parliament who cared one way or another. Nader Khan Katawazai, an MP from Paktika, complained that only 30 of the 238 MPs attended Monday's session. This is the government we are being asked to prop up with blood and treasure? Only 30 legislators bothered to come in to work?

By law, Karzai was supposed to have presented his cabinet to parliament within two weeks of being sworn in (which was two weeks ago). Since he has been insisting he was the winner since early September, he should have had time to put together a cabinet. But he presumably had to make some substitutions once he admitted that three of his current cabinet members were under investigation for corruption. (Twelve other former cabinet members, having fled the country, were also being looked at for criminal prosecution.)

That is the government that the U.S. has been propping up for the last eight years. Fifteen cabinet members that Interpol is looking into?

Even the non-corrupt ministers may not be confirmed by the parliament because of substantial dissatisfaction with the inability of many of them to spend the development money their ministries had in the kitty.

Seven ministries spent only 40 percent of their allocated budget in the past year, according to Pajhwok News. And the sums expended on development projects declined 10 percent last year from the two previous years!

Let's repeat that. The Afghanistan government presides over the fifth-poorest country in the world. It has millions of dollars in aid to spend for the betterment of its constituents. But it actually managed to spend less on these tasks this year than in previous years, despite having more money.

The chairman of the National Economy Commission, Siddiq Ahmad Usmani, said that 500 development projects were supposed to have been pursued last year with the 111 billion Afghani budget allotment, but in fact, "work on only 263 of 500 was carried out which are yet to be completed."

The low governmental capacity of the Afghan state bodes ill indeed for Obama's success in Afghanistan. He will be constantly looking for a reliable partner. He will find shifting quicksand.

Meanwhile, the Taliban, whom no one is accusing of apathy or inefficiency, have begun deploying donkey suicide bombs against foreign troops.