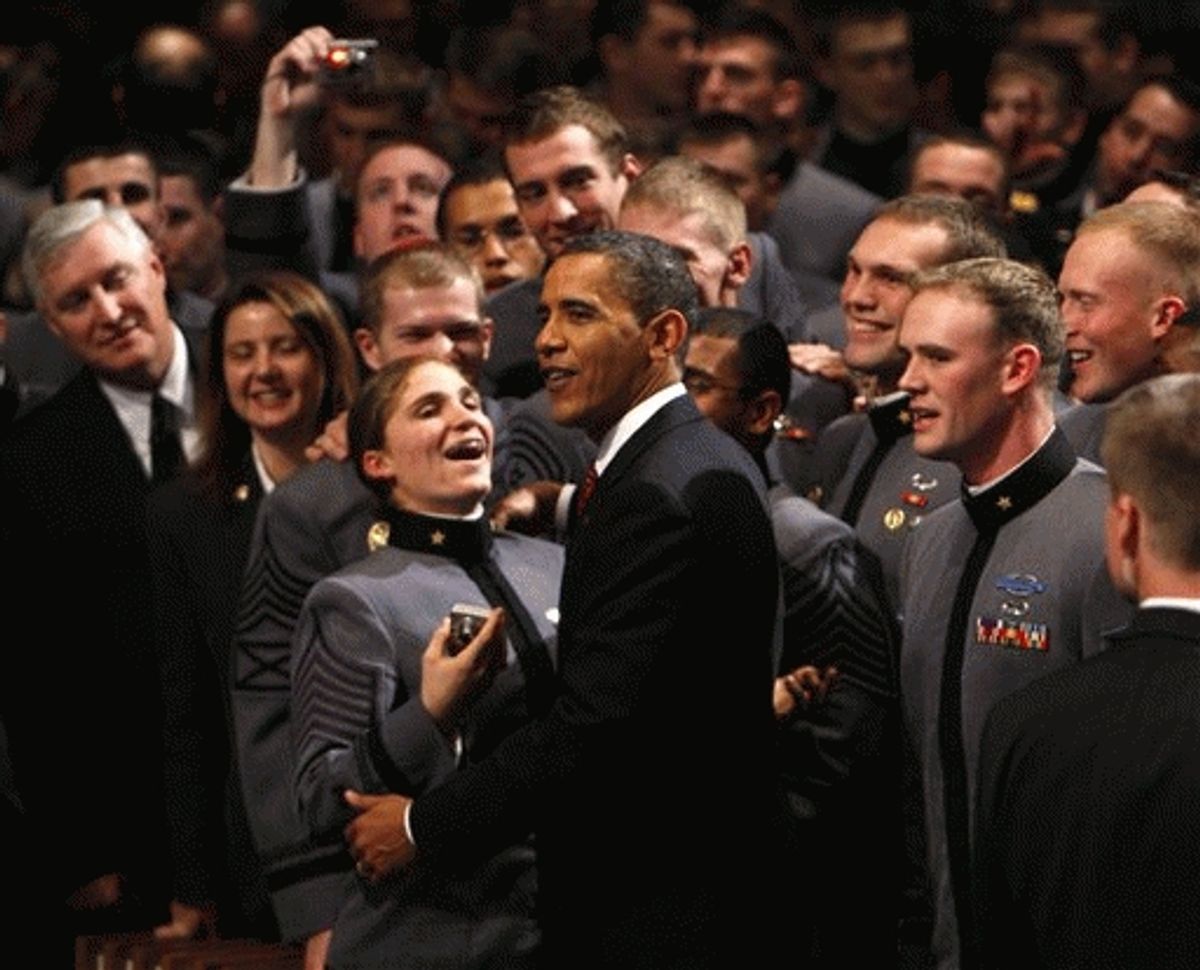 President Obama takes a picture with cadets after speaking about the war in Afghanistan at the United States Military Academy at West Point, N.Y., Tuesday.
--

The Democrats who serve in the House and Senate can read a poll as good as anyone, and on one thing at least the polls have been pretty clear lately: Americans aren't exactly wild about President Obama's position on Afghanistan. So it's not surprising to see Congressional Democrats distancing themselves from the leader of the party on the issue, even in the midst of a big new policy rollout. But the speed and the passion with which they're doing it is pretty striking.

There may not be a better weathervane on this than Sen. Arlen Specter, D-Pa. With a tough re-election fight ahead of him, the newly-minted Democrat's positions have been pretty dependent on electoral politics this year -- even his choice of parties came down to electability. And in this case, Specter wasted very little time after Obama's speech on Tuesday night before he came out to criticize the president's decision.

“I oppose sending 30,000 additional American troops to Afghanistan because I am not persuaded that it is indispensable in our fight against Al Qaeda," Specter said in a statement. “It is unrealistic to expect the United States to be out in 18 months so there is really no exit strategy. This venture is not worth so many American lives or the billions it will add to our deficit.”

There are others besides Specter, of course. Congress' liberal wing, predictably, has come out to oppose the surge, but it's hardly shocking to see opposition from card carrying progressives like Sens. Russ Feingold and Bernie Sanders or Rep. Dennis Kucinich, or to hear that some anti-war members want a vote on the whole thing, and soon. But it's not just them -- Obama's friends are distancing themselves, too.

Sen. Dick Durbin had plenty of reasons to come out in support of Obama's decision -- the two became allies when they represented Illinois together, and Durbin is a member of his party's leadership. But even he took a bit of a shot at the president Tuesday night, echoing criticism that's been coming from the right lately when he said, "President Obama asked for time to make his decision on a new policy in Afghanistan. I am going to take some time to think through the proposal he presented tonight."

Other senior Democrats were similarly unwilling to come out in favor of the plan to send 30,000 additional troops to the war. "For me it boils down to whether or not there is a convincing answer to this question: What can realistically be achieved, and is it worth putting our soldiers' lives on the line, at a million dollars a troop, as our economy continues to struggle here at home?" Sen. Pat Leahy, D-Vt., said. "At this point I am not convinced that the hole dug earlier by a thousand bad decisions can be paved over at all."

However -- in a shift from the dynamic at work in the debate over healthcare reform -- Obama is getting support from some of the more conservative members of his party, especially ones who have elections in Republican-leaning states to consider. Take Louisiana Sen. Mary Landrieu, who said, "I support the president's decision to send additional troops to Afghanistan and commend him for taking the time to get input from both his military and civilian advisers. Bringing the total American force to nearly 100,000 troops by the end of May of next year will enable our soldiers and our NATO allies to train the Afghan security forces at a quicker pace. This is a necessary step to secure areas that have been falling to the Taliban forces."

There'll be ample opportunity for more from both sides on Wednesday. Secretary of State Hillary Clinton and Defense Secretary Robert Gates are both on the Hill trying to sell the plan, and that means camera time for the members grilling them, so expect some tense moments.