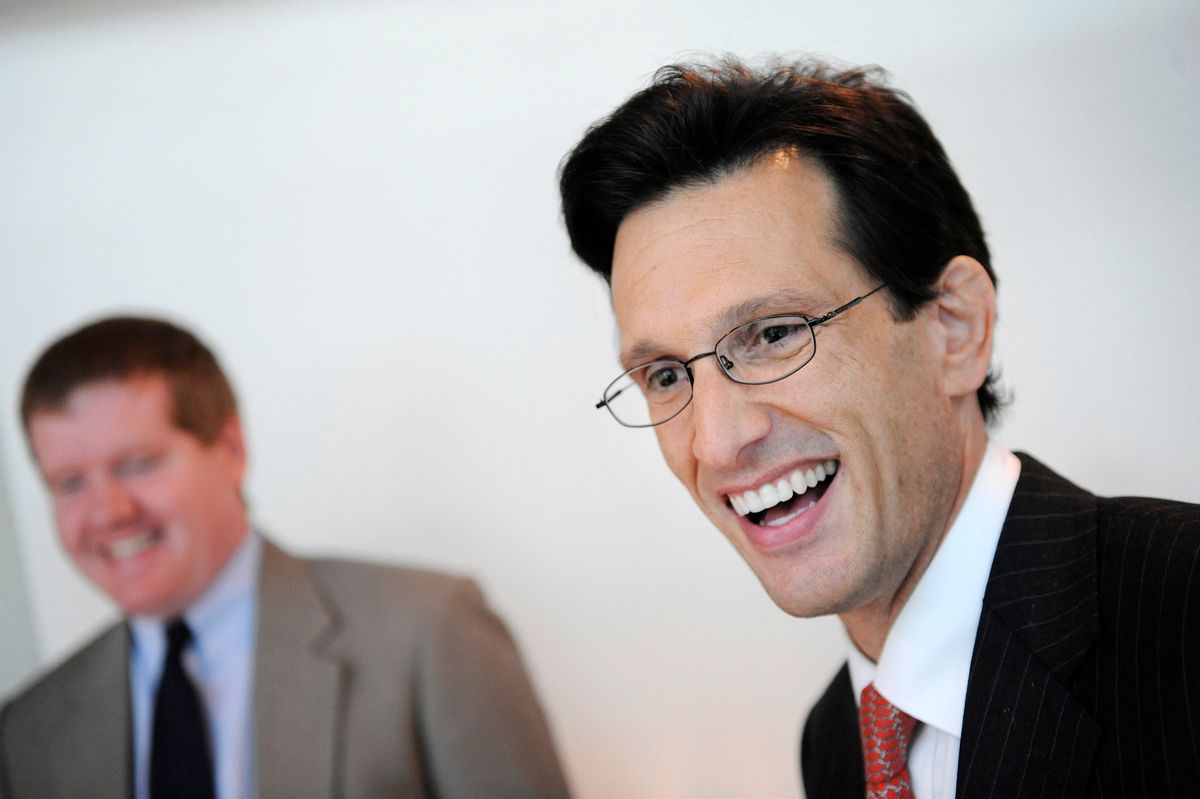 House Minority Whip Rep. Eric Cantor (R-VA) (R) smiles as he departs after an interview at the Newseum in Washington October 1, 2009. The interview is part of the first day of the First Draft of History event, held by the Atlantic Magazine and the Aspen Institute to bring together newsmakers, historians and journalists. REUTERS/Jonathan Ernst (UNITED STATES POLITICS) (Reuters)
--

Along with about 400 to 450 other streaming-video-via-Facebook attendees, I just watched the Republican Minority Whip, Rep. Eric Cantor, deliver what was billed as a "major address" outlining the GOP plan to boost U.S. job creation.

Speaking at the Heritage Foundation in Washington the day before President Obama's "jobs summit," Cantor outlined what he called "a no-cost jobs plan."

Let's pause, for a second, to appreciate the brilliant rhetorical framing. A no-cost jobs plan! Without adding a single dime to the deficit, the Republican's plan will ameliorate the worst unemployment crisis in 30 years. One wonders how a political party capable of such innovative thinking ever lost its hold of power.

No one will ever accuse Cantor of being the most mellifluous of speakers, but one could only be impressed at the decisive manner in which he listed the seven planks of his plan. These included stopping "the deluge of detrimental rules and regulations," putting a halt to any new taxes, cutting some taxes, freezing discretionary government spending, approving free trade agreements, and removing obstacles to domestic energy production.

He also recommended that recipients of unemployment benefits be required to participate in job training or education programs and urged a forceful approach to addressing the oncoming commercial real estate meltdown, including tweaking depreciation rules, to allow corporations to more quickly claim related tax advantages.

Oh, and, as if it even requires mentioning: Don't even think of passing healthcare reform or a climate bill.

I would really, really love to have access to an alternative universe in which Cantor's plan could have been applied this past year, in parallel with our world, in which the economy was injected with a massive stimulus, so we could compare the efficacy of the two approaches in real time. What would have happened if instead of spending money, the government had sat on its hands?

Cantor says the Obama stimulus has failed. Just two days ago, the Congressional Budget Office (which Cantor approvingly referred to a "neutral" in his speech) declared that the stimulus had worked -- that it had added 1.2-3.2 points of GDP growth that would otherwise have not occurred and added 600,000 to 1.6 million jobs.

So without the stimulus, judging from the CBO report, one can assume that the economy would still be contracting, and unemployment would be higher than it is now. But in Eric Cantor's world, with Republicans in control, slashing regulations and freezing spending, we'd be better off. Why not? In a world where "no cost" solutions are possible, anything can happen.