Is the jobs summit just a photo op? 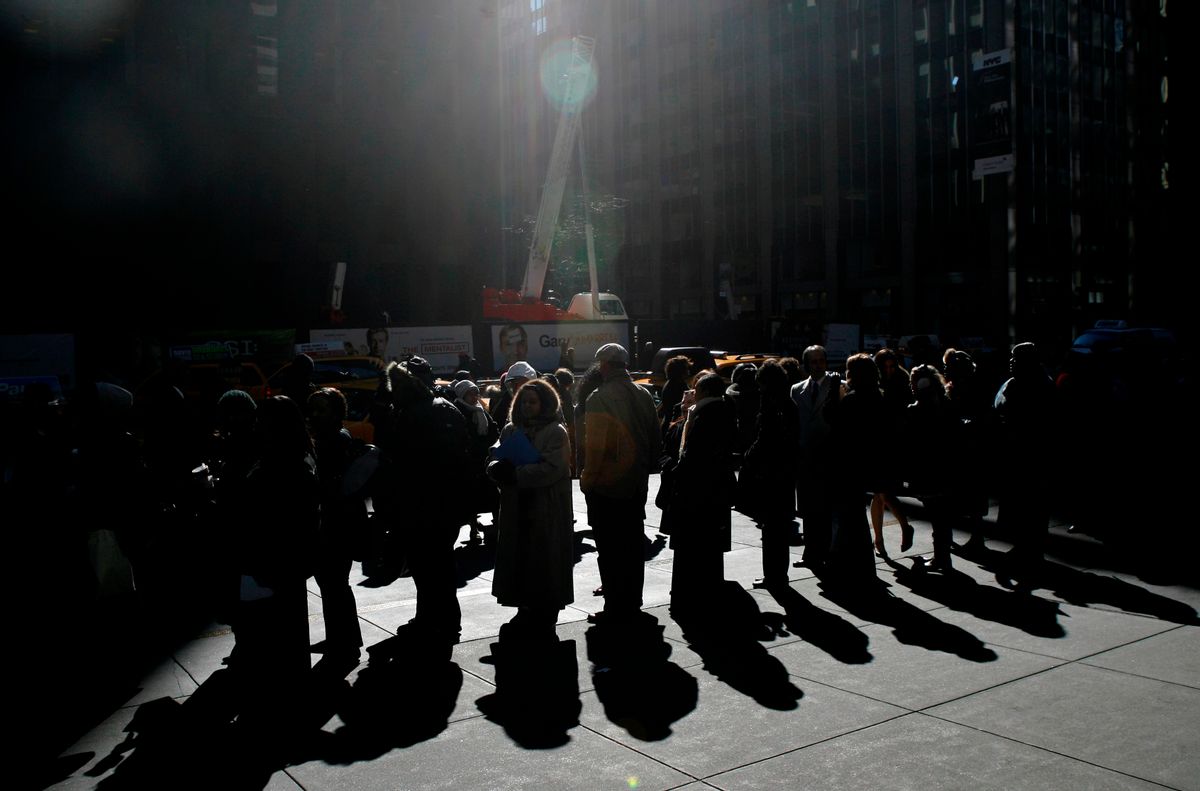 Job seekers wait in a line that stretches around the block and doubles back on itself to get into the Women For Hire Career Expo in New York, Tuesday, Feb. 24, 2009. Thousands of people showed up for the event where about forty employers were talking to prospective hires. (AP Photo/Seth Wenig) (Associated Press)
--

Some of the best minds of this generation are getting together at the White House jobs summit this week to get our economy back to pre-recession levels.

But if they do only that, we will all fail.

President Obama is right to bring together some of the nation’s top business, labor and community leaders to figure out how to bring jobs into the recovery. But just re-creating the past is not enough. We must create a new financial structure -- an inclusive, expansive economy that harnesses the skills of all people.

An economic recovery that doesn’t lift up low-income people and communities of color is no recovery at all. President Obama has shown he is committed to a recovery for all, which is why I am honored to be one of several nonprofit and advocacy leaders who will try to bring the voices of struggling Americans to the table at the jobs summit.

Bringing disinvested communities to the forefront is vital for a 21st century economy that serves workers, communities and corporate bottom lines.

We can no longer allow the talents and potential of tens of millions of Americans to be wasted. We can no longer let entire cities simply fade and crumble in a cloud of unemployment and lack of interest.

While the federal stimulus package helped keep the nation from sliding into another Great Depression, the challenges we continue to face are staggering:

• One in six black men is unemployed.

• One in seven Latinos is unemployed.

• The unemployment rate for those without a high school diploma has almost doubled since the recession began, to 15.5 percent.

These problems didn’t appear overnight, of course. Decades of disinvestment in many American communities has left us reeling. We are wasting the most precious resource we have -- the ingenuity and hard work of millions. We need all Americans working on all cylinders to keep our economic engine running. A stagnant economy that leaves millions behind cannot compete in the global marketplace.

That is why many of the America’s most forward-thinking business leaders support equity, too. They need employees from every skill range. International investors give strong preference to companies situated in areas with a diverse, well-trained and accessible workforce. They can see the new jobs coming, but rely on smart public policy to provide them with qualified, nearby workers.

Innovative leaders know that we must first invest in the people and communities who need help most. In fact, just this week, Kansas City Power & Light committed $48 million to create a "smart grid" in some of the city’s lowest-income areas -- creating jobs for local residents and keeping energy costs down. The grid is the first step in a groundbreaking "Green Impact Zone," which will transform a long-ignored community into a sustainable model for other distressed urban areas.

Cutting-edge corporations already know where the jobs of tomorrow will be, but it is up to all of us to make sure those jobs go to communities that need them most. In a recent analysis, Google found that we will create 9 million new clean energy jobs by 2030. These jobs aren’t for Ph.D.s in pristine white lab coats, huddled around bubbling beakers. Rather, the bulk of these jobs are in construction and operations -- so-called middle-skill jobs that require only a year or two of training beyond high school.

As I often say, "equity is the superior growth model." For America to reach its economic potential, every American must have the opportunity to participate and prosper.

So, how do we ensure "equity" is the primary driver of our long-term and short-term economic plan? Real, sustainable economic recovery requires that we:

1. Train the next generation of middle-skill workers.

We know a high-school diploma just won’t cut it for the jobs of tomorrow. But a four-year college degree isn’t feasible for every student. One or two years of training after high-school can train a young person (or retrain an older one) for high-wage jobs like lab technicians, machinists and operating engineers. By investing a set percentage of every infrastructure dollar in job training, we would help save the economy of today and build the economy of tomorrow.

While exurban McMansions are often the public face of the foreclosure crisis, poor communities and urban communities of color have been hit particularly hard. Keeping homeowners in their houses and abandoned houses clean is the key to stopping entire communities from falling apart.

The fight against climate change can begin at home, quite literally. By retrofitting thousands (or even millions) of homes in poor neighborhoods, we can dramatically cut our energy use and help working families save money on their energy bills. Those cutting-edge construction and technology skills stay with a person even after the retrofits are done, too. But most important, we can put thousands of people to work lifting up their own communities.

4. Invest in the long-term infrastructure of all communities.

We must even out the country’s lopsided and ill-conceived infrastructure spending. While money continues to flow to new suburban highway construction, many low-income communities are left without the adequate public transit they need to access good jobs. Expanding broadband lines to poor communities could also unleash pent-up entrepreneurship. All of the construction and maintenance jobs created by these investments are within reach of middle-skill workers and would serve as a solid foundation for local economic growth. A National Infrastructure Bank, which has already had traction on Capitol Hill, is a perfect way to keep our infrastructure investments focused on the long-term needs of all Americans.

None of these ideas on their own is enough to bring the national economy to full vibrancy. We need a multifaceted, multiyear approach to restarting our jobs engine. Short-term job creation efforts must serve the long-term economic interests of all communities.

The jobs summit is a wonderful step in the right direction. The lessons learned by labor leaders, global CEOs, small-business owners and innovative nonprofits must be joined together to create a 21st century economy that serves everyone.

Our objective Thursday is not to simply re-create the old way of doing business. It’s to imagine a new world of economic possibility.

Angela Glover Blackwell is the founder and CEO of PolicyLink, a national research and action institute advancing economic and social equity