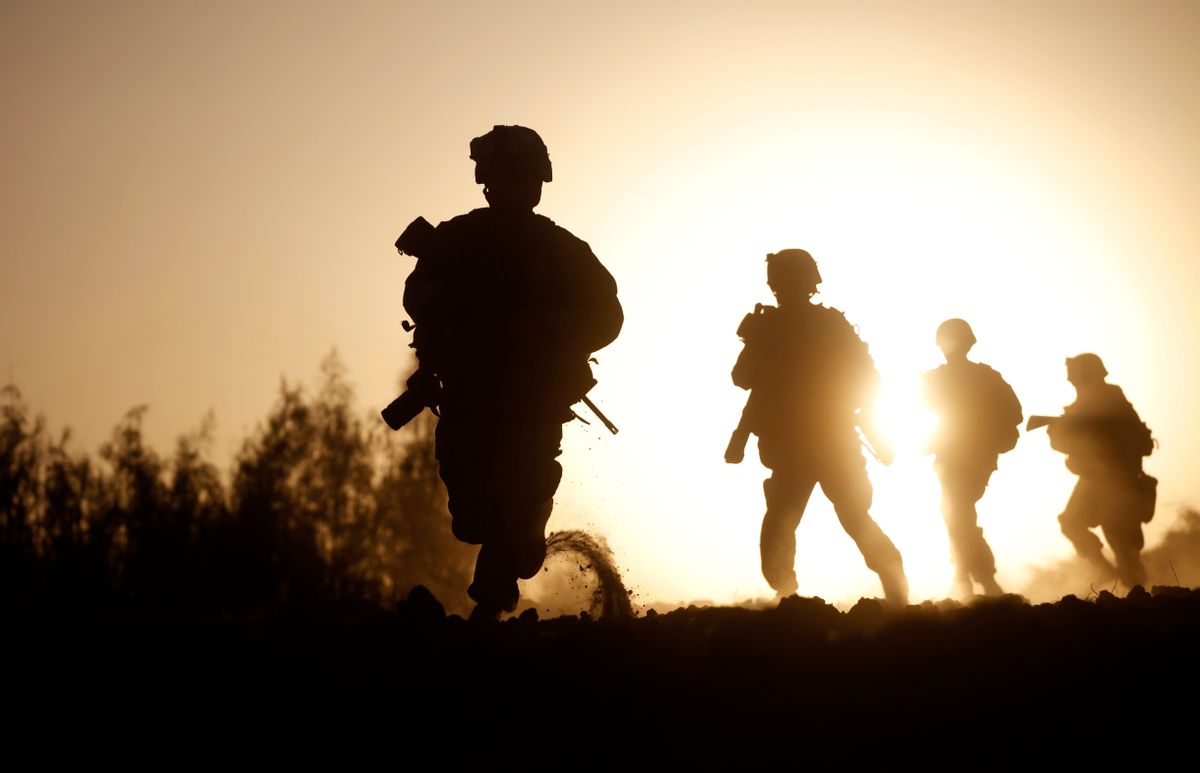 U.S. Marines with 3rd Platoon, Bravo Company, 1st Battalion 5th Marines, run for new cover after it appeared the Taliban was zeroing in on their position, in Nawa district, Helmand province, southern Afghanistan, Friday, Oct. 2, 2009. The fight, which began when Taliban fighters opened up with assault rifles and machine guns on a Marine patrol over open ground, lasted around 2 hours, and ended with no casualties among the Marines and an unknown number of Taliban wounded or killed. (AP Photo/Brennan Linsley) (Associated Press)
--

If, years from now, historians and pundits are putting together lists of President Obama's best speeches, the one he gave Tuesday night probably won't even be considered. Indeed, the address that Obama delivered to a crowd of West Point cadets, in which he explained his decision to send an additional 30,000 of their future comrades off to fight in Afghanistan, didn't come close to the heights Obama often strives to hit.

Instead, Obama spent much of the time on the defensive, trying to convince a skeptical public that he made the right decision -- that it's not his mess, he's just trying to fix it -- and to deflect the attacks that will be coming from both right and left. At times, Obama even sounded like the man whose decision it was to invade Afghanistan in the first place -- former President George W. Bush.

The similarity to Bush's rhetoric was strongest at the start of the speech, when Obama reached back, as his predecessor so often did, to the attacks of 9/11.

"To address these issues, it is important to recall why America and our allies were compelled to fight a war in Afghanistan in the first place. We did not ask for this fight. On September 11, 2001, nineteen men hijacked four airplanes and used them to murder nearly 3,000 people. They struck at our military and economic nerve centers. They took the lives of innocent men, women, and children without regard to their faith or race or station," Obama said. He went on to recount the history of the invasion of Afghanistan and the overthrow of the Taliban. In an interesting move, he also referred to the Authorization for Use of Military Force that Congress approved in the wake of the attacks, something the Bush administration often did when justifying various controversial moves it made.

At the same time, though, Obama did also talk about the places where he's broken from Bush, and he laid some of the blame for the war's progress and its costs at the former president's feet. Obama was careful not to do so too explicitly, though, or to criticize Bush too harshly:

The wrenching debate over the Iraq War is well-known and need not be repeated here. It is enough to say that for the next six years, the Iraq War drew the dominant share of our troops, our resources, our diplomacy, and our national attention -- and that the decision to go into Iraq caused substantial rifts between America and much of the world.

[W]hile we have achieved hard-earned milestones in Iraq, the situation in Afghanistan has deteriorated. After escaping across the border into Pakistan in 2001 and 2002, al-Qaida’s leadership established a safe-haven there .... Gradually, the Taliban has begun to take control over swaths of Afghanistan, while engaging in increasingly brazen and devastating acts of terrorism against the Pakistani people.

Throughout this period, our troop levels in Afghanistan remained a fraction of what they were in Iraq. When I took office, we had just over 32,000 Americans serving in Afghanistan, compared to 160,000 in Iraq at the peak of the war. Commanders in Afghanistan repeatedly asked for support to deal with the reemergence of the Taliban, but these reinforcements did not arrive. That’s why, shortly after taking office, I approved a long-standing request for more troops.

From there, Obama went on to officially announce his decision, the contents of which had long since been revealed, to send an additional 30,000 U.S. troops. And almost as soon as he made that announcement, he was defending it, telling the cadets, "I do not make this decision lightly... I make this decision because I am convinced that our security is at stake in Afghanistan and Pakistan" and recognizing the obstacles to escalation that remain on the home front.

Lately, one of those obstacles has been the increasing opposition from the left to the idea of escalating, or even continuing, the war in Afghanistan. The president addressed that pretty directly, referring to "those who suggest that Afghanistan is another Vietnam." He took issue with that, arguing -- again, like Bush -- that in this case, "we are joined by a broad coalition of 43 nations." He continued:

Unlike Vietnam, we are not facing a broad-based popular insurgency. And most importantly, unlike Vietnam, the American people were viciously attacked from Afghanistan, and remain a target for those same extremists who are plotting along its border. To abandon this area now -- and to rely only on efforts against al-Qaida from a distance -- would significantly hamper our ability to keep the pressure on al-Qaida, and create an unacceptable risk of additional attacks on our homeland and our allies.

There's pressure on Obama from the right too, of course, and he went after that as well. Regarding people who "call for a more dramatic and open-ended escalation of our war effort" and their position, Obama said, "I reject this course because it sets goals that are beyond what we can achieve at a reasonable cost, and what we need to achieve to secure our interests .... [T]he absence of a timeframe for transition would deny us any sense of urgency in working with the Afghan government."

Unfortunately for Obama, these arguments aren't likely to convince either side. He's undoubtedly escaped some criticism from the right by essentially following the recommendation made to him by his commanding general in Afghanistan, but conservatives are going to find other reasons to oppose him. Meanwhile, many liberals are unhappy about the escalation, and Congressional Democrats are gearing up to make things regarding it difficult for the president.