Products that mean something

Our new shop is shot through with the site's DNA. It's about more than stuff. It's about ideas 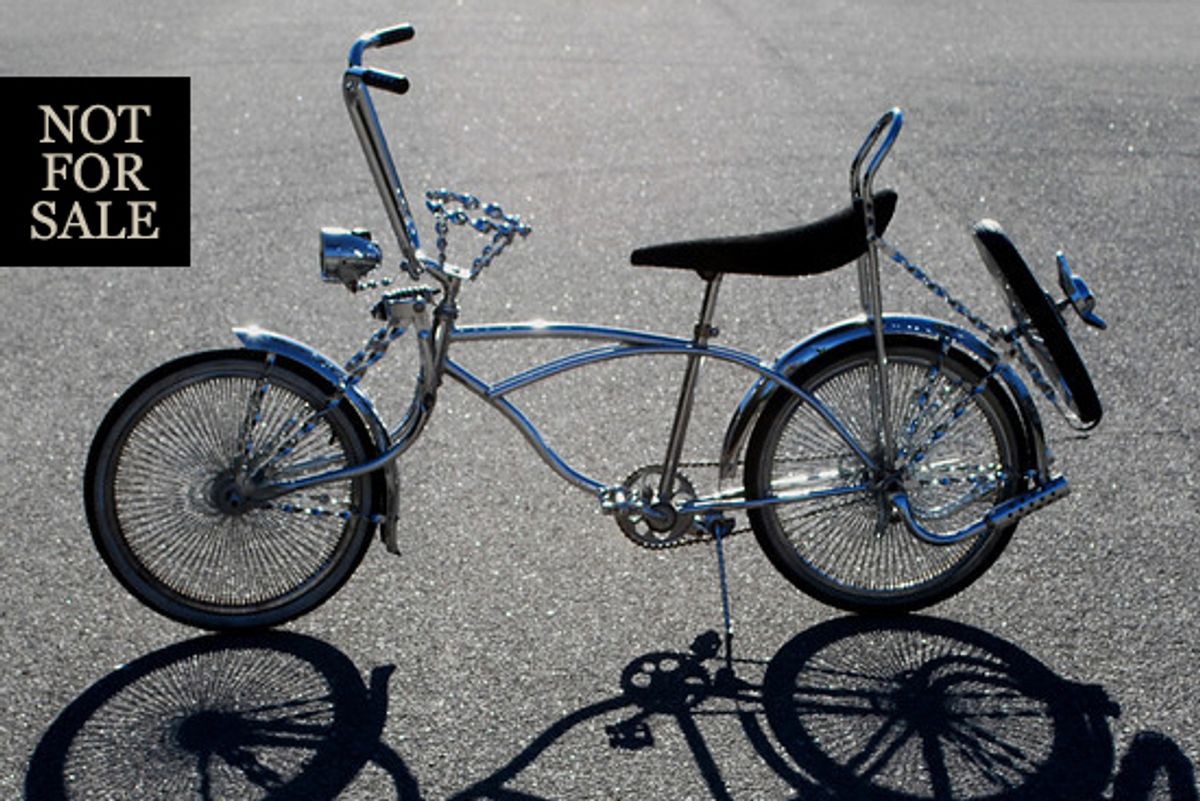 Every time I think about how to explain the new Salon Store, I come back to the bicycle.

Last summer, I began working with Salon CEO Richard Gingras to develop a "store" concept under the Salon brand. We had many meetings. (Salon people do a lot of thinking and talking, I learned.) Throughout our discussions there hovered a central question: Did we think that Salon's DNA translated into a store? If so, why?

On first blush, it may seem like kind of a tough road. Salon is a media site. It's about ideas. Important ideas, deep ideas, goofy ideas ... but ideas. So why suddenly offer stuff for sale? If you begin driving Salon there, kind of taking the site (and indeed the brand) off-road, aren't you risking that the wheels will fall off?

Late one night during the brainstorming phase last summer, I was winding down by cruising Craigslist (no, not that part of Craigslist). I wound up in "bikes."

Amid the $1,000 (and $10,000) titanium-framed, fully suspended, on- and off-road competition bikes for sale around bike-obsessed San Francisco, I stumbled onto this. A custom Sting Ray chopper re-creation. All chrome. With spiral/twisted fork ... and high-density spoke wheel ... and a steering wheel ... and mufflers ... and a spare tire, to top it off, carried in the back, like my granddad's '35 Ford.

I called the phone number the next day. I found myself talking to a young guy -- a kid, the owner/builder. He lived in Richmond, an economically challenged city in the East Bay. At the end of my day at Salon, I drove across the Bay Bridge to have a look.

I drove up a street with no occupied houses, save for the one that was my destination. It was encircled by a high fence. There was a large dog in the yard. I honked the horn, walked up and met a Hispanic family. There were three kids playing in the yard and driveway, a well-kept house, and a garage full of projects with wheels. No English spoken here, save for the owner of the bike. Mom sat on the front stairs watching over everyone, friendly but guarded.

The bike builder was 16. He'd built the bike when he was 14. He'd spent months putting it together. Then he rode it to school every day for two years. At night he parked it inside, cleaned it and polished it. The bike led to other projects. He was now building go-karts, not just for himself but with a local shop. He was on a vocational track in school. He needed the dough out of the bike to buy parts for his new cart venture.

So, the bike, a little chrome conceit, a ghetto ornament, had started him on the road to a career. He was blessed with a strong mom who had created a fortress of a household. He was on his way, a fragile, hopeful contrast to the kids just blocks away in his sometimes incredibly sad city.

Two-hundred fifty dollars was a lot of money for a bike that had seen a pretty hard and well-used life, no matter how deeply it had been loved. The fork was loose; the wheel spokes had a patina of rust. But for a signpost, a memory of a hardworking family, doing their best against really bad odds? I paid him, and hoisted the bike into the back seat of my car. I asked if I could take their picture, and received an emphatic "no" from his protective mom. (Of course not -- what was I thinking?) The bike now sits in the courtyard of our little house in Marin.

So, what does this have to do with Salon? It's just this: Products -- things -- matter.

On the one hand: As consumers, we are drowning in an endless sea of bad and unnecessary products. Too much stuff being produced. Stuff that sucks resources away from more socially important needs. Products that, whether cheap or expensive, are awful. Devoid of ideas, sometimes even dangerous.

So we become anti-consumer, anti-product, anti-retail. We look for ways, in a world filled with hardship, to simplify, to walk away from the avalanche of stuff.

But on the other hand: Products -- the right products, designed with passion, for the right reasons, made responsibly -- can be inspiring. They can be the embodiment of values and, indeed, of dreams. They can literally change people's lives, both those who produce them and those who consume them.

A product may distill the conviction of a young designer, studying art, wanting to make a difference. Or it may represent the deeply held beliefs of an engineer who has spent a lifetime studying a need and developing a theory. Or it may embody the witty, fun imaginings of an inventor who just wants to make people smile. Or it may hold the hopes of a 14-year-old kid who can make something of chrome that embodies his loves and passions, that gives him a reason to work toward his future.

For the past decade or so, I've spent my life in retail, and around designers. I love it because of the creativity and the passion. There's lots of uninspired crap, yes. But there are also companies that stand for something and products that mean something. You find it in small companies and large ones. Young designers turn out stunning products in their living rooms. Larger companies sometimes, out of the blue, and in shocking contravention to their prior history, come up with an impassioned, different approach.

So this is why I think that offering products for sale fits with Salon's mission. Not every product fits with Salon. In fact, few do. But if a product is driven by ideas, by values, by dreams, then it fits. If it makes you smile or conveys a thought or gets you to reexamine the way you do something, then it's as resonant as a political statement, a movie or a book. It's an idea, and a very concrete one. A product isn't an argument that can morph or shift or dodge or be reinterpreted. It sits there, and it means it. It is what it is.

The mission of the Salon Store is to find and showcase products that fit with Salon -- because they embody ideas. As a starting point, we embraced three key words: smart, funny and progressive. The Salon Store is about finding products that fit these words, these filters, and giving them a stage. The idea is to create a virtuous circle -- guiding you to great products, and thereby, helping designers with good ideas to build their companies.

With our holiday collection, I hope you can see some of these values reflected -- the beginnings of this mission. It is just a start. And it's a fluffy start. The holiday collection is a gift collection, things that we think are different in fun and interesting ways. We chose it in part based on the idea that the holidays can be terribly serious for many people, and that, of our three key words -- smart, funny and progressive -- at holiday time, the focus should be on funny, on helping you make someone smile.

Many of the things in this collection, however, actually also reflect some broader values -- for example, because of where they're made, or how, or by whom. Next year, as we add new things to the Store, you'll see an expanding and serious emphasis on things that, in various ways, reflect and embody important social goals.

Last summer, on that evening in Richmond, before I drove off I asked the kid a question. I told him that I was in the process of starting a new e-commerce business. I said, "If I put a picture of your bike on my site, and, if someone wants one like it, would you be interested in making more?" Maybe, he said, guardedly.

I've carried this around with me since then. So, if you like the bike, write me. I'll see if I can interest him in producing some bikes. Who knows, if we were to get some traction with it, it might even help get him through school.

And that would be exactly, precisely, reflective of why I wanted to do this in the first place.