She's her own boss at 19 and a wildly successful artist, but her songs keep her waiting around for Prince Charming 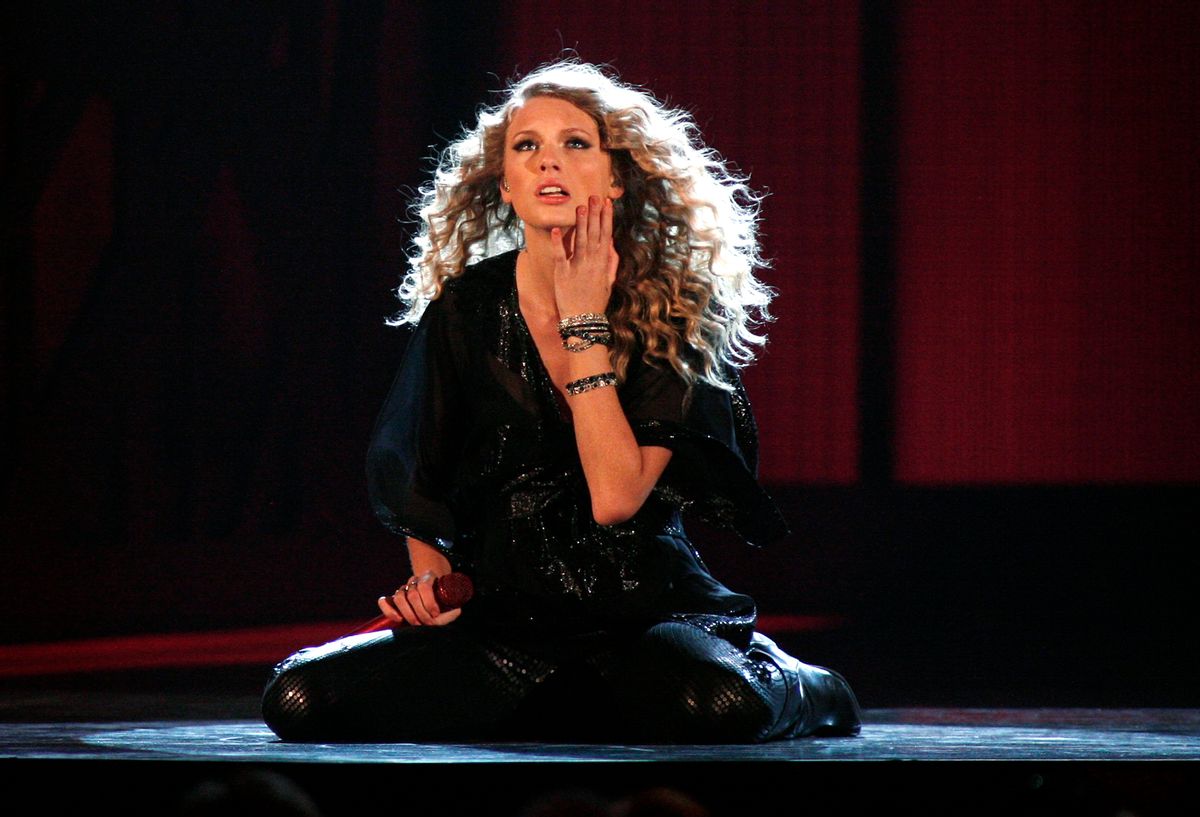 Feminism is confusing sometimes! As I've lamented before, it occasionally compels me to defend the anti-feminist likes of Sarah Palin and "Twilight," and if that weren't bad enough, now I can't figure out what to make of this year's platinum success story Taylor Swift, recently nominated for eight Grammys. I haven't thought much about Swift, but I'm generally inclined to agree with ladybloggers like Amanda Hess and Sady Doyle, two smart writers in their 20s who have concluded that the 19-year-old's songs reinforce some not-so-woman-friendly stereotypes in extremely annoying ways. But today, with a typically excellent post about pop culture's promotion of patience as a girl-powerful virtue, Hess got me wondering -- not that she meant to -- about whether there might be a legitimate feminist argument in favor of Taylor Swift.

First, let's acknowledge some major points in the Not Feminist column. As Hess says, "Taylor Swift sings songs about waiting around, being a princess, and crying for her 'Romeo' to rescue her from her dad, who is so mean. Then, she makes videos for these songs where she is literally waiting in an ivory tower for her prince to come." And here's Doyle's interpretation of Swift's song "Fifteen": "Teen Girls of America, here are your choices: have sex and wind up broken and sad and feeling as if you've lost 'everything you had,' or wait until your untouched vagina accumulates enough charge to make you rich and famous." Doyle concludes, "Telling girls stories about how being too sexual will make them broken hollow sluts who can never succeed at life isn't new, and it isn't cute. Not even coming from sweet little Taylor Swift. "

So, OK, I'm gonna allow that Taylor Swift's lyrics, generally speaking, do not advance the cause of feminism. But she also wrote songs as a little girl as young as 7, as Broadsheet editor, former music critic and unabashed pop fan Sarah Hepola pointed out to me today. Hepola, who is in her 30s, has spent a lot longer than me thinking about Taylor Swift (a fact she is, believe it or not, proud of). "I LOVE the song 'White Horse.' I think it's so simple and heartbreaking, and if I were 14 years old I would listen to it a million times on repeat." (As it is, she only listened to it four times on repeat this afternoon.) That one -- in which a girl who's been cheated on realizes she's better off without Prince Charming -- is certainly a nice counterpoint to "Romeo," the waiting-around-for-Mr.-Right song Hess took apart today. Also, after informing me that Taylor Swift started out as one of the Jonas Brothers' girlfriends only to become even more famous than her ex, Hepola added, "She is subverting the story of the groupie -- she's the girl who dated the superstar and got cheated on, and she turned it into a great album, and she became her own superstar. (This is not new, of course. Stevie Nicks, etc., etc.)."

And that brings us to the crux of the "Is Taylor Swift good for women?" debate, which -- exceptions like "White Horse" aside -- really comes down to Taylor Swift, lyricist, vs. Taylor Swift, public figure. It's her superstardom (and apparent business savvy) itself that provides the most compelling pro-Swift argument. As music critic Ann Powers wrote in the L.A. Times last year, "Swift might play a princess in many of her songs ... but in the studio she's her own boss, writing and producing those fairy tales." Hess is unconvinced: "This is the Sarah Palin theory of feminism. If she's a woman, and she does stuff, it's feminist -- even if that stuff is writing songs about waiting around for boys do stuff to you." But that's not all Taylor Swift does. You can't completely wave away the symbolic value of all that writing, producing and bossing in a typically male-dominated industry, especially when Taylor Swift, unlike Palin, is not known for being ignorant of vitally important aspects of her own business.

Furthermore, I'm already on record as believing that, content aside, there's a certain value in entertainment products that reveal the full power of the obsessive teenage girl market. Sure, the music industry has long known that such girls will shell out for throwaway (and even sometimes good) pop by swoon-inducing young men and carefully packaged, basically interchangeable young women -- but for female singer-songwriters who seem to be in charge of their own careers? That's pretty new. Citing other big names in today's pop pool, like Katy Perry, Rihanna and Adele, Powers writes, "Pop culture has never wanted for 'it' girls, but the authority these fledgling artists claim is a great sign of feminism's ripple effects ... Swift is exceptionally precocious, but cowriting credits are the rule in this bunch, and Svengalis are rare. Whether they've actually spent time listening to the Ronettes, the Runaways or Lauryn Hill or not, these women have benefited from their elders' hard-won lessons." That sounds a lot like overall progress, which doesn't seem to have slowed in 2009; the question is only whether the sexist messages in their music are an equal or greater setback.

Powers' article doesn't ignore the less feminist aspects of recent girl pop -- in fact, she discusses them in detail -- but she ultimately makes a strong argument that the success of Swift and her peers on more or less their own terms represents an important, hopeful change in the music industry and in how we regard young, female performers. I mostly agree with Hess when she says, "These women don't deserve our ire, but they don't deserve a cookie, either. Swift should be celebrated as a promising entertainer who writes catchy tunes I like to listen to on the radio. Feminist? Not so much." But I guess I'm a bit more optimistic about what young women like Taylor Swift are accomplishing, at least in big-picture terms. It will be a great day when more female artists are calling the shots, topping the charts and writing lyrics that don't make me cringe -- but two out of three isn't a bad start. And given that Swift just snagged those Grammy nods a week and a half before her 20th birthday, right now I'm in more of a mood to celebrate her success as a businesswoman than pick apart her failures as a girl-power pop princess.