Of Obama birth, the ex-governor says, "the public is still, rightfully, making it an issue" (Updated) 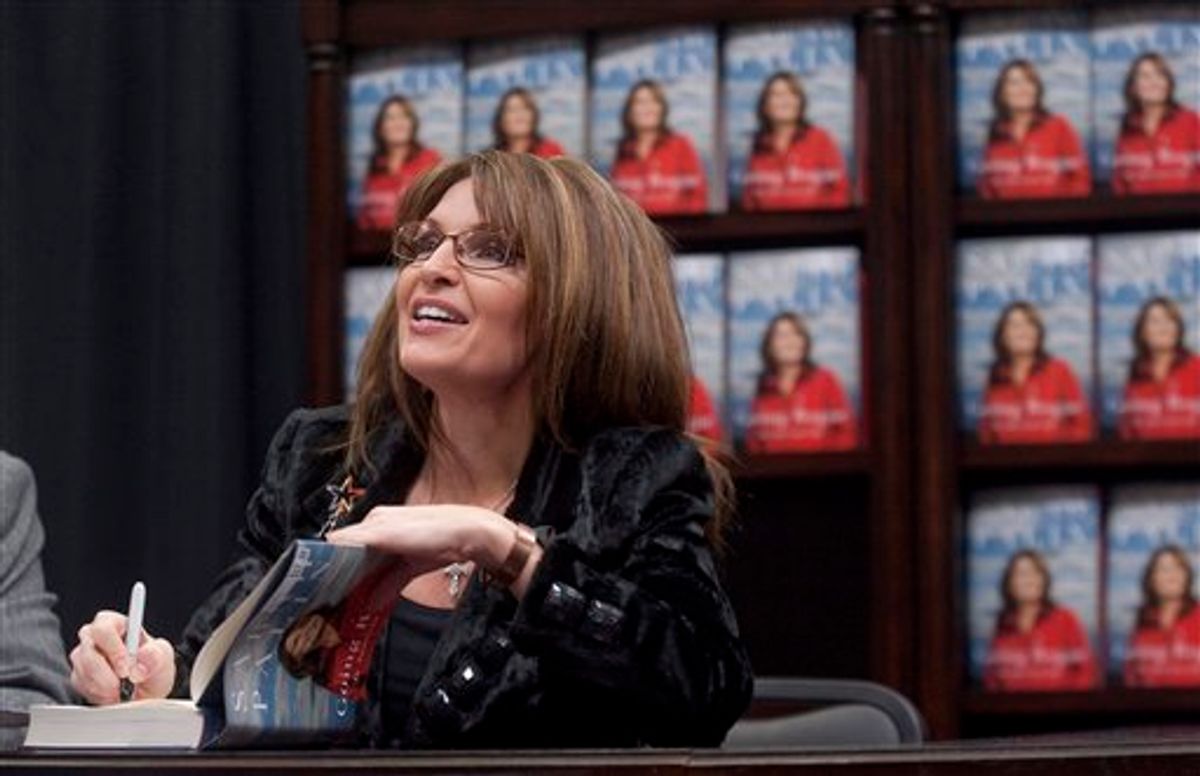 During her year in the spotlight, former Alaska Gov. Sarah Palin has jumped on her fair share of conspiracy bandwagons. She's even kick-started one or two, like the infamous "death panels." But, at least, she'd never joined up with the Birthers, the people who believe President Obama wasn't born in the U.S. and is thus not eligible under the Constitution to hold his office.

Until now, that is.

Palin did an interview with conservative radio talker Rusty Humphries on Thursday. During their conversation, Humphries brought up a question apparently submitted by one of his readers: "Would you make the birth certificate an issue if you ran?"

The meaning of "the birth certificate" was clear. Humphries was asking about Obama's birth certificate, and the various myths about it: That he hasn't released a copy, that the copy he did release is a forgery and on and on. (If you missed it a few months back, my full debunking of the Birthers' theories is here.)

This is the exchange that ensued:

HUMPHRIES: Would you make the birth certificate an issue if you ran?

PALIN: Um, I think the public, rightfully, is still making it an issue. I don't have a problem with that. I don't know if I would have to bother to make it an issue, because I think enough members of the electorate still want answers.

HUMPHRIES: Do you think it's a fair question to be looking at?

PALIN: I think it's a fair question, just like I think past associations, past voting records, all of that is fair game. You know, I gotta tell you, too, I think our campaign, the McCain-Palin campaign, didn't do a good enough job in that area. We didn't call out Obama and some of his associates on their records and what their beliefs were, and perhaps what their future plans were, and I don't think that was fair to voters, to not have done our jobs as candidates and as a campaign to bring to light a lot of things that now we're seeing made manifest in the administration.

HUMPHRIES: I mean, truly, if your past is fair game and your kids are fair game, certainly Obama's past should be. I mean, we want to treat men and women equally, right?

PALIN: Hey, you know, that's a great point. That weird conspiracy theory freaky thing that people talk about, that Trig isn't my real son, a lot of people say, "Well, you need to produce his birth certificate, you need to prove that he's your kid," which we have done, but yeah, so maybe we should reverse that and use the same type of thinking on the other one.

(Video of the interview is at the bottom of this post, with a hat-tip to HotAir's Allahpundit on Twitter; the relevant portion begins at roughly 7:45.)

Palin is, of course, wrong to say that the public is still "rightfully" bringing up the issue -- it's been answered again and again at this point, and there's no doubt that Obama was born in Hawaii. But she is right about a couple of things: For one, whoever the Republican nominee is in 2012, they won't "have to bother to make it an issue." It already will be, if not one discussed explicitly by the campaign and its surrogates, because so many Republicans already have doubts about the president's birthplace. The fact that Palin and other mainstream figures, like Lou Dobbs and Tom DeLay, have indulged the Birthers doesn't help matters.

Palin's also right to draw a parallel between the conspiracy theories that surround Obama's birth and the one about her son. The two are equally nutty. You'd hope, however, that going through that experience would teach her that it's an awful thing to happen to anyone, regardless of political party. Instead, her attitude seems to be that the two wrongs somehow make a right.

Update: Palin's now taken to Facebook -- where else? -- to do a walkback of sorts of her comments. In a post titled "Stupid Conspiracies," she writes:

Voters have every right to ask candidates for information if they so choose. I’ve pointed out that it was seemingly fair game during the 2008 election for many on the left to badger my doctor and lawyer for proof that Trig is in fact my child. Conspiracy-minded reporters and voters had a right to ask ... which they have repeatedly. But at no point -- not during the campaign, and not during recent interviews -- have I asked the president to produce his birth certificate or suggested that he was not born in the United States.

Of course, Palin's original remarks went further than this. And "conspiracy-minded reporters and voters" have asked about Obama's birth certificate too. The questions have been answered. As Hot Air's Ed Morrisey observed after Palin posted this, "It’s the same thing as Truthers saying that all they’re doing is 'asking questions.' The answers have already been provided; they just reject them because they’re married to their conspiracies.