Is my kids making me not smart?

Stay-at-home fatherhood dulls my intellect to a nub. Excuse me while I ponder the subtext of "Hippos Go Berserk" 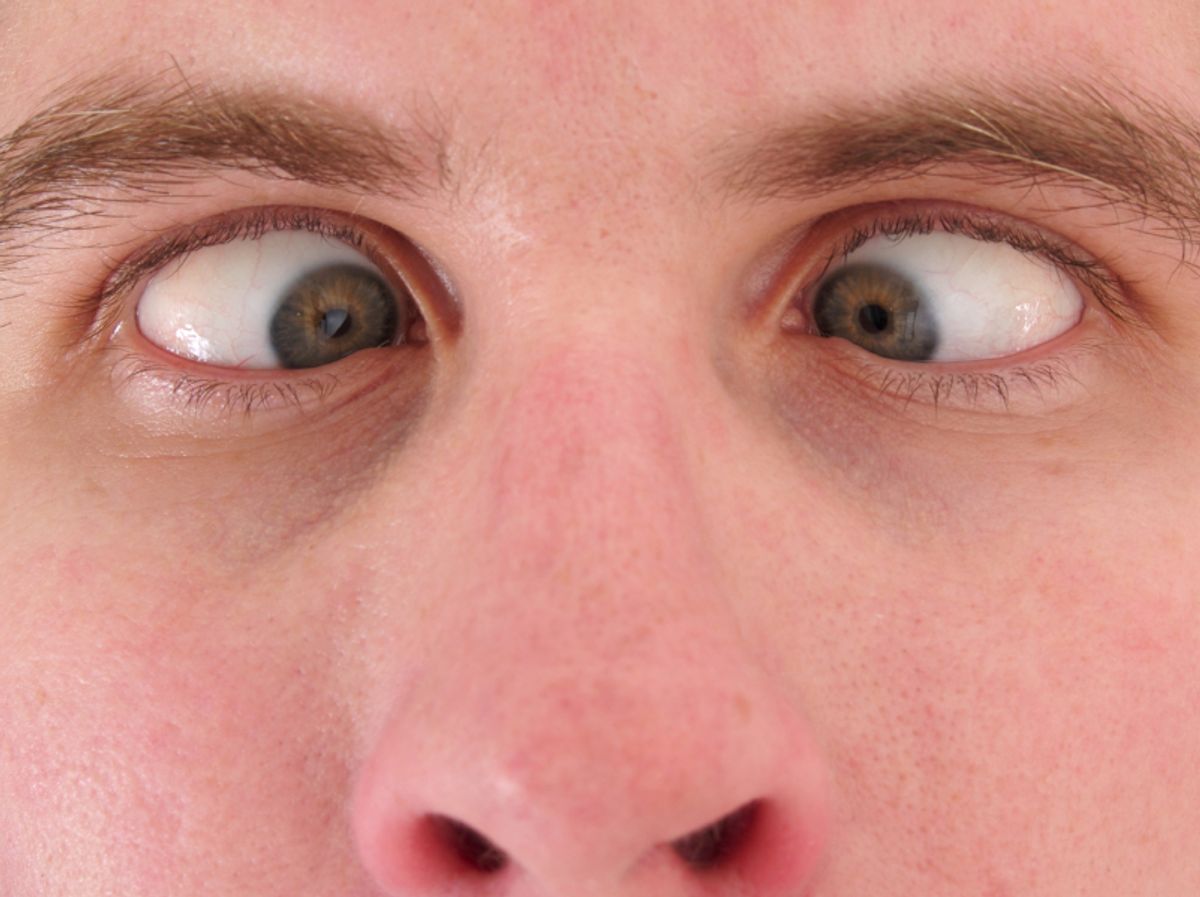 I don't know if parenting makes you chronically stupid or just temporarily slow, but after nearly four years of child rearing, most of them spent as a stay-at-home dad, my intellect has been dulled to a nub. Women have known this for generations. Maybe that's why the "stay at home vs. get out and work" debate is so contentious. Of course, I've never heard anyone talk about it. But maybe I just wasn't paying attention until now. All I know is, while my wit may never have cut with the precision of a Ginsu blade, my mind was a bit sharper than the rusty pair of kindergarten safety scissors I'm working with these days.

How often have you been at a fancy dinner party, or a rocking kegger, and overheard someone lamenting the fact that their friends with children have suddenly been rendered incapable of discussing anything except the contents of the baby's diapers or the adorable thing little Cullen did to the dog? There are Facebook groups for venting frustration with parents who constantly yammer about their offspring and the business of raising them. I understand where these people are coming from. But it is hard for me to understand why they are so annoyed — after all, those people are free.

The common misconception of childless, alcohol-imbibing party guests and cyber-ether baby-haters alike is that parents blabber constantly out of some arrogance or indulgent desire to show off their great kids and their perfect parenthood. Nothing could be further from the truth. We parents have so little now; the children have taken so much. We just have nothing left to say. We sometimes hear ourselves and know how we must sound to others, and we feel great shame. Our children have broken us and turned us into single-subject simpletons. They've accomplished this feat in what is supposed to be the prime of our intellectual life.

Parenthood be not proud.

After 14 uninterrupted hours of childcare, making the transition from Diego and diaper cream to Jim Lehrer and Paul Krugman is an exhausting prospect. If I ever muster the energy to investigate what is going on in the world outside the baby bunker, I find it impossible not to see that world through the deceptively warped lens of how my children fit into it.

I would love nothing more than to write an insightful article about healthcare reform, but I'm dumb now. Anything I write relating to healthcare would end up as a screed about why my children have to take a back seat on getting their flu shots to a bunch of kids with “respiratory disorders.” Why are kids who can't breathe right so much more important than my own kids? My kids love to breathe, and they're good at it, and they should be rewarded for their aptitude in breathing. But I digress.

Aside from totally skewing my worldview and politics, my kids also obstruct my ability to feed my mind in the way I used to. I can't tell you the last time I read something that wasn't about hippos going berserk. That being said, I'd still jump at the opportunity to discuss the subtext of the book "Hippos Go Berserk" with another adult, because you take what you can get when you're a parent. But even that discussion would not be very long since Sandra Boynton, the author of "Hippos Go Berserk," doesn't shroud the meaning of her tome in layers of literary subterfuge: “One hippo alone once more ... misses the other forty-four.” The point is, of course, that the hippo doesn't know what he's got till it's gone, like Joni Mitchell with her parking lot (wait, am I remembering that song right?) or like me with my smartness. So you see -- I'm the hippo.

My view of parenting and its effect on the adult mind is particularly sour right now since my daughter has just entered into the most difficult stage of development. She is 10 months old, and while most people would point to the fabled “terrible twos” as the most challenging and exhausting time with their young ones, the interval between 8 and 15 months is almost indescribably difficult for me, especially because it is making me not good at words plus how to use them.

At least the terrible twos come with a certain destructive streak fueled by imagination and creativity. The current state my daughter finds herself in is one of complete and abject dependence, combined with a totally unhealthy understanding of self-preservation, combined with newfound mobility, combined with an almost complete lack of comprehension. If I put my daughter down to attend to the needs off my son (or my bladder) within seconds she will be yards from her drop point and will have discovered the most harmful object in a three-room radius. If it can be pulled onto her head, choked on, ignited, shattered or used to gouge herself (or the dog), my daughter will be magnetically drawn to it. There is no reasoning with her. There is no stopping her. Anything short of constant vigilance will end in a trip to the emergency room or a panicked call to the fire department (or the vet).

There must be a biological imperative that babies be at their cutest during these months. At 8 to 15 months they shed the anonymous blobbiness of infancy but have not yet achieved the sticky-fingered, snot-caked grossness of toddlerdom. That they are at their most adorable means that parents are less likely to abandon them to their own devices for more than five minutes (or altogether), because going longer than five minutes at this age is akin to a death sentence. It also means that your children become the equivalent of the Overlook Hotel from "The Shining": You can never escape their icy grip.

Even the once relaxing pastime of following my favorite sports teams has become an exercise in futility. I was so exhausted from my days of hauling around 30 pounds of baby girl and 40 pounds of toddler boy that trying to watch the World Series was like trying to listen to my wife explain how my new phone works while being waterboarded. I'm still not entirely sure that the Phillies aren't world champions. Chase Utley won it all by tying Jesse Jackson's World Series home run record, right?

Don't get me wrong: Even with the physical strain, the job of stay-at-home parent is better than any other job I've had, because it's not really A Job. But the trade-off for this freedom is severe. For the moment, the children have transformed me into a one-dimensional dullard. My son's recent question, “Do we hammer on cats?” not only seems perfectly reasonable to me at this stage in my life, but now also warrants some serious consideration.

I am not proud that much of my daily brain power is dedicated to figuring out whether the mysterious object in my daughter's mouth can be swallowed and digested or whether it will become lodged in her throat. But this is the life I've made for myself, and it is either talk about that or take a vow of silence. As I tell my uncomprehending daughter, “You can't put something mysterious in your mouth and then cry about it when it doesn't taste good or blocks your airway.”

I have to believe that as my children become less dependent on me, my higher brain functions will return to some semblance of normalcy. It is my sincere hope that four years from now I'll be writing about "opting back in."

I can just imagine it: “Mr. Traister, you haven't held a job in seven years. What makes you think you're Ground Round fry-cook material?”

“Well Pete, I know it's a school night, and you have homework to get to, but I'd like to revert to my ethnic heritage and answer your question with a question: Do we hammer on cats?”

So next time you find yourself tearing into a friend or acquaintance who can't shut up about their kids, the next time you find yourself ready to fire off an angry missive about the unrelenting surging tide of mommy blogs, remember that you're hammering a dead cat. We know it's sort of sad, but it's all we have until the kids become a little older. Allow me and my kin to engage in our one conversation, even if it's just to stay in practice for when we emerge from the bunker. Maybe you can even find it in yourselves to muster a little understanding for us next time you're out past 10 p.m. at one of your fancy childless keg parties where you discuss the new Philip Roth and the Phillies' amazing World Series defense. Because, who knows? You may find yourself dumb like me someday.