"Anarchy," "Glee": As subtle as pulling a knife on a baby

Kidnapped infants! Van Halen remixes! "Sons of Anarchy" and "Glee" could use a little self-restraint 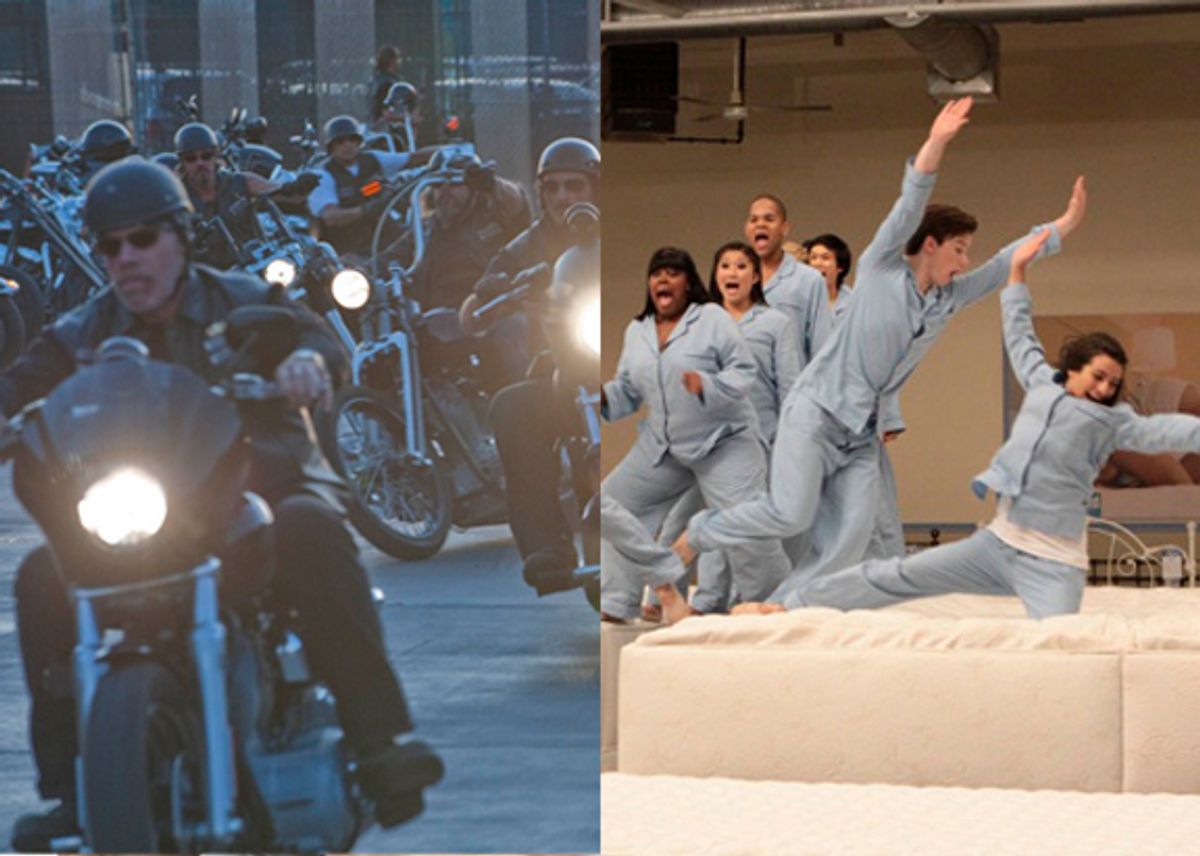 We are not living in the age of subtlety. If you don't pick up a golf club, your husband may not grasp the emotional weight of your request that he stay and hear you out. If you don't create a horrifying national spectacle by dangling your own child's survival enticingly in front of the news cameras, producers may not show much interest in your big idea for a reality TV show, starring you. Without the courage to crash a dinner party thrown by the leaders of the free world, you may never win the public scorn and widespread notoriety that is the American dream.

Subtle parents, subtle teachers, subtle businesspeople, subtle leaders are passed over daily in search of something brighter and shinier and more full of obvious, ham-handed promise. We have grown into an insecure nation filled with jittery souls who seek the big, showy reassurances of corporate and commercial entities full of win-win scenarios. We don't want to weight costs against benefits with smart, balanced adults. We think the word "compromise" means we'll have to give up some of our toys. We are impatient children who want Disney princesses as mommies, Iron Man as daddies, and Barney the Dinosaur in the White House.

FX's "Sons of Anarchy" could never really be described as nuanced or sly, but it was still difficult not to hold out hope that, in the show's second season finale, we might see all of these warring criminal factions clash in some interesting new way. Instead, we have Agent Stahl (Ally Walker) as the root of all evil yet again (Hello, first season finale), Gemma (Katey Sagal) as the half-baked avenger, and one big, flashy season-ending twist.

But then, what do you expect from the show that saw our hero Jax (Charlie Hunnam) making sweet love to his doctor girlfriend Tara (Maggie Siff) minutes after killing her stalker in cold blood, the man's still-warm body lying a few feet from where they did the deed?

This season's finale looked interesting enough at first. Agent Stahl impulsively shoots Eddie (Callard Harris) in the back as he's trying to escape her. Oops. Then she sits in the house wondering how to clean up the mess. In walks Polly Zobelle (Sarah Jones), Eddie's girlfriend and the woman who lured Gemma into the van so she could be gang-raped by her father's thugs. Polly finds Eddie dead. Gemma,who followed Polly there, walks in and shoots her. Stahl comes out from hiding, tosses Gemma the gun that killed Eddie so she can pin Gemma with both murders. She tells Gemma she'd give her a little time to make a run for it.

Cameron (Jamie McShane) hears that his son Eddie has been murdered by Gemma. He shows up at the house and finds Tara and Half Sack (Johnny Lewis), who were looking for Gemma. He takes a knife and threatens to kill Abel, Jax's baby son, to avenge his son's death at Gemma's hands. Half Sack makes a move to save the baby, and Cameron stabs him in the chest as Tara looks on sobbing.

Cameron dashes out of the house with Abel. Shoves the baby in the car. Tara phones Jax. Jax and the rest of the gang have Ethan Zobelle (Adam Arkin), the root of all evil, cornered at last, and he's no longer surrounded by schoolchildren. But instead of walking right in and blowing him away, then hopping on their motorcycles, they all ride off. Couldn't one or two guys stay and finish him off? These guys aren't exactly stealthy about their criminal acts, after all. But no, they all shake their heads then ride off in pursuit of Cameron and Abel. Jax dashes toward the docks where Cameron's boat was tied, but it's too late! Cameron is speeding away with Jax's baby boy! Jax collapses in a heap as Clay tries to hold him up. Get it? Fathers and sons, people! Sons! Get it?!!

See how subtlety separates good shows from bad ones? "Sons of Anarchy" is frustrating, because it's almost a really good show. Great acting, smart dialogue, great cinematography. But then someone decides they'll threaten to stab a baby. On "the Sopranos," all you need is a crushed baby car seat in the backseat of an SUV to demonstrate what a reckless asshole Christopher is. On "The Shield" it would push it a little further, with Vic Mackey's wife and child being locked in a storage container to keep them out of harm's way (although of course it doesn't look that way to Mackey).

But "Sons of Anarchy" makes no attempt at subtlety. While you might suspect that Kurt Sutter and his writers are crafty enough to pull it off, they instead opt for dazzling showdowns, gratuitous bloody fights, and half-crazed mourning daddies pulling knives on little babies. Of course, then there's the fact that the members of the Sons travel through town with AK-47s strapped to their backs like extras in a "Terminator" movie, then line up on the main drag downtown and glare at the Mayans across the street while the cops look on. What is this, a post-apocalyptic Roger Corman flick?

The baby-stealing is bad, though. This means that, what, we're going to worry about the welfare of a 6-month-old for the first half of the show's third season? We're going to see Tara and Jax torn apart by guilt and depression? This is the sort of senseless sensationalism that just makes shows crappy. It's the medical helicopter that crashes right on top of Romano on the season finale of "ER." This is the very definition of the shark jump, an act that points that a show's writers no longer have a sense of how to keep things interesting without turning the show into a live Vegas act where characters stab each other with butcher knives and bite the heads off chickens and eat them. This show has so much potential, but it was born to jump sharks -- they are all on motorcycles, after all. Even Fonzie himself, with his comb-slicked hair and his leather jacket, is more subtle than the Sons.

Children of the cornball

"Glee" (9 p.m. Wednesdays on Fox) is another show that has stumbled since its premiere. The wit and nastiness are still there, but we're increasingly drawn into extended musical numbers with all of the charms of … well, actual show choir performances. This makes watching "Glee" a lot like tolerating the company of a gaggle of self-adoring showoff high school kids, kids who sing "Poker Face" at the top of their lungs and speak in one or two-word phrases like "Hellooo?" and "Really?" and "Done that." And ... you know. Done that.

Let's be honest. As great as Rachel (Lea Michele) is in many ways, she's becoming a problem. She performs a solo at least once every other episode, and, well, it's not entirely enjoyable to watch her croon tunes like "On My Own" from "Les Miserables" and "Don't Rain on My Parade" from "Funny Girl" and "Taking Chances" by Celine Dion while the cameras circle her face, over and over, for dramatic effect. What's worse, though, is seeing Will Schuster (Matthew Morrison) sing constantly. Morrison is perfect for the role of glee club director, but his performances always seem to devolve into boy band yuckiness: the hunchy shoulders, the little snapping fingers, the funky white boy shuffling feet. And last week, in place of interesting choreography, we watched the entire glee club don blue pajamas and bounce up and down on mattresses while singing a disturbingly chirpy version of Van Halen's "Jump." I'm sure that's enjoyable to some attic full of shrooming misfits somewhere who tuned in by accident, but to me, these numbers are getting more and more literal and less artful each week.

And the sound mix on "Glee" is pure immaculately conceived pop fakeness: Artificially tuned notes, a sterilized, vacuumy sonic landscape, perfectly blended vocal parts. Why not give us a little bit of grunge and grime and noise, so we can appreciate these voices? One thing that true show choir fans love is the earnest sound of teenage voices, blending together in that fragile, sweet way, warbling and echoing out into a big auditorium. But there's no organic echo on "Glee," no warbling, nothing that feels heartfelt or the least bit wobbly. With all of the post-production sterilization here, these kids sound more like Kraftwerk.

And try this on for Not Remotely Subtle: Rachel develops an unexpected crush on Mr. Schuster, then, in order to explain that he's not into her, Mr. Schuster sings a neutered version of the Police's "Don't Stand So Close to Me" mashed together with "Young Girl." The results truly stretch the limits of achingly bad televised musical numbers, pulling a close victory over that almost-as-ludicrous and deeply dorky rendition of Madonna's "Papa Don't Preach" by Quinn Fabray (Dianna Agron).

The dialogue, although mostly clever, occasionally veers into the same obvious territory. Take this really bad exchange between Finn (Cory Monteith) and Kurt (Chris Colfer) about Finn's plan to tell Quinn's parents that she's pregnant with his baby.

Finn: My father was brave enough to fight in some desert thousands of miles away, and I can't even go over to Dudley Road and tell the Fabrays the truth.

Kurt: Your father didn't charge into the breach empty-handed, he had a weapon.

Finn: You think I should bring a gun?

Kurt: No, I think you should use your greatest weapon: Your voice.

No, please, bring a gun instead. We need it.

Of course, 13-year-olds still seem to love this show, as I would if I were 13 years old and had as much use for subtlety as I had for kale or long-winded historical novels. In fact, you know what one of my favorite songs was when I was 13 years old? "Don't Stand So Close to Me" by the Police.

So I suppose "Glee" successfully caters to its teenage demographic. Personally, though, I say: Make some odd musical choices, experiment with a more organic, noisy sound, throw in some cool choreography beyond jazz hands and ass shaking, and give Sue Sylvester (Jane Lynch) something a little more substantive as a motive than "taking down the Glee Club." Artistically, this show is capable of becoming truly great. It might mean lengthening its production schedule so that more complicated numbers can be integrated into each show, but imagine how much brilliance could be packed into an hour, if the show's producers cast aside the bubble gum pop and predictable oldies for a few more eclectic choices? No need to pull a knife on the baby over and over again. You have our attention, you have the ratings. Now it's time to get a little weird.

Yes, I know. This is Fox we're talking about, not the local arts council run by a colorful lady named Gretta with a penchant for George Bernard Shaw and Gilbert and Sullivan's back catalog (not that they were considered all that subtle in their own day). Still, in a world ruled by hearsay, cellphone footage and blaring headlines in 50 point, hot pink font, it's hard not to long for a little restraint.

Glee I Like To Watch Sons Of Anarchy Television