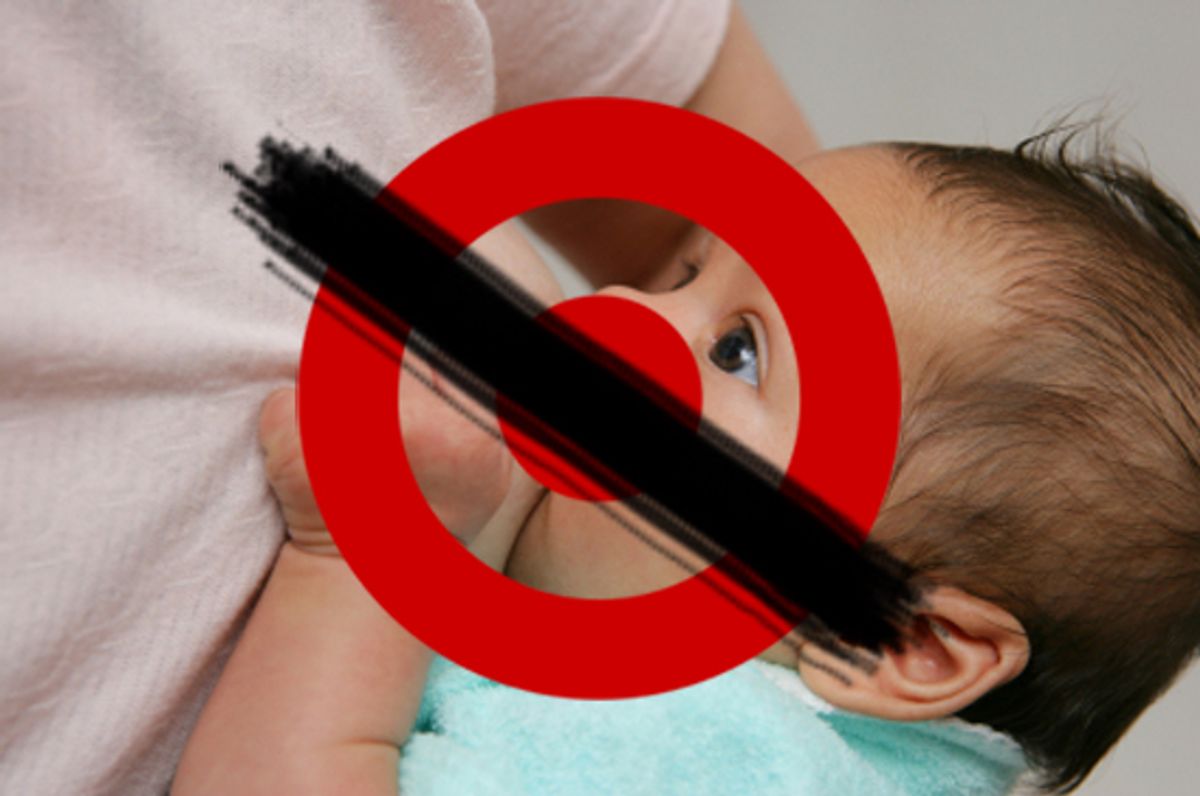 While Mary Martinez was shopping in a Target store in Harper Woods, Mich., recently, her 4-week-old baby got hungry. And because some people still haven't gotten it through their heads that women often use their own breasts to feed hungry babies, a security guard who saw her doing just that told her she had to leave because she was breaking the law. Which she was not. Target mistake No. 1.

When Martinez and her husband, Jose -- a police officer who knew full well his wife wasn't doing anything illegal -- refused to leave, the security guard called the cops. Target mistake No. 2. Although the local officers who arrived confirmed that it is not against the law to breast-feed in public in Harper Woods, Mary Martinez says she felt humiliated and forced out of the store anyway. "Two security guards, the manager or team leader, two officers, they just made a spectacle and a scene. I feel like I can't go to that specific Target anymore."

Now, Target mistakes 1 and 2 can be written off as the poor judgment of individual employees, but 3 is the real eye-popper: When contacted by Detroit's Fox affiliate, Target's corporate headquarters said that breast-feeding is allowed in their stores, but "This specific situation escalated to a point where we were concerned for the safety of our guests, so law enforcement was called." Are you kidding me? How on earth does feeding a baby "escalate" to a safety issue for other customers? Target's corporate spokesperson does understand that when you give a quote to a media outlet, other people will end up hearing it, right? And also that words mean things?

Perhaps not, because the rest of the statement was: "We regret the incident in our store and will continue to provide a shopping environment that respects the needs of all guests, including nursing mothers." Yeah, see, the verb "continue" implies that you have already been doing a thing you plan to keep doing, yet calling police on a breast-feeding woman is not providing a shopping environment that respects the needs of nursing mothers. See how that works? So at this point, you could maybe start respecting nursing mothers, or change things so that all Target security guards are aware that breast-feeding is neither illegal nor against store policy, or create a new rule like, "Hey, don't call the cops on moms feeding their babies," but you can't really "continue" doing something you weren't doing before.

I mean, sure, maybe every other Target in America is wonderfully welcoming to nursing mothers, but even if that were the case, this one screwed up. Badly. And the savvy P.R. move in response to such a screw-up is not, "we were concerned for the safety of our guests" -- I'm sorry, did Mary Martinez whip out a gun and demand that everyone back off while she finished feeding her kid? Take hostages? Tell someone she'd planted a bomb? -- but, "Our security guard overreacted and misrepresented both store policy and local law, and we are ashamed that a Target employee caused the Martinez family so much trouble and embarrassment. We want to reassure our guests that nursing mothers are always welcome in our stores." Because you know what? Even if you alienate the kind of customers who might find an accidental boob sighting offensive, I'm guessing that's better for business than alienating parents of young children; women who are, have been or might someday be nursing mothers; and any other human beings who understand that babies need to eat.

The manager of the Harper Woods store told the TV station that (despite evidence to the contrary) "breast-feeding is certainly not discouraged inside of her store." Good thing, since I'm betting that store now has a nurse-in to look forward to.