Colonialism had its discontents, but this is worth keeping around 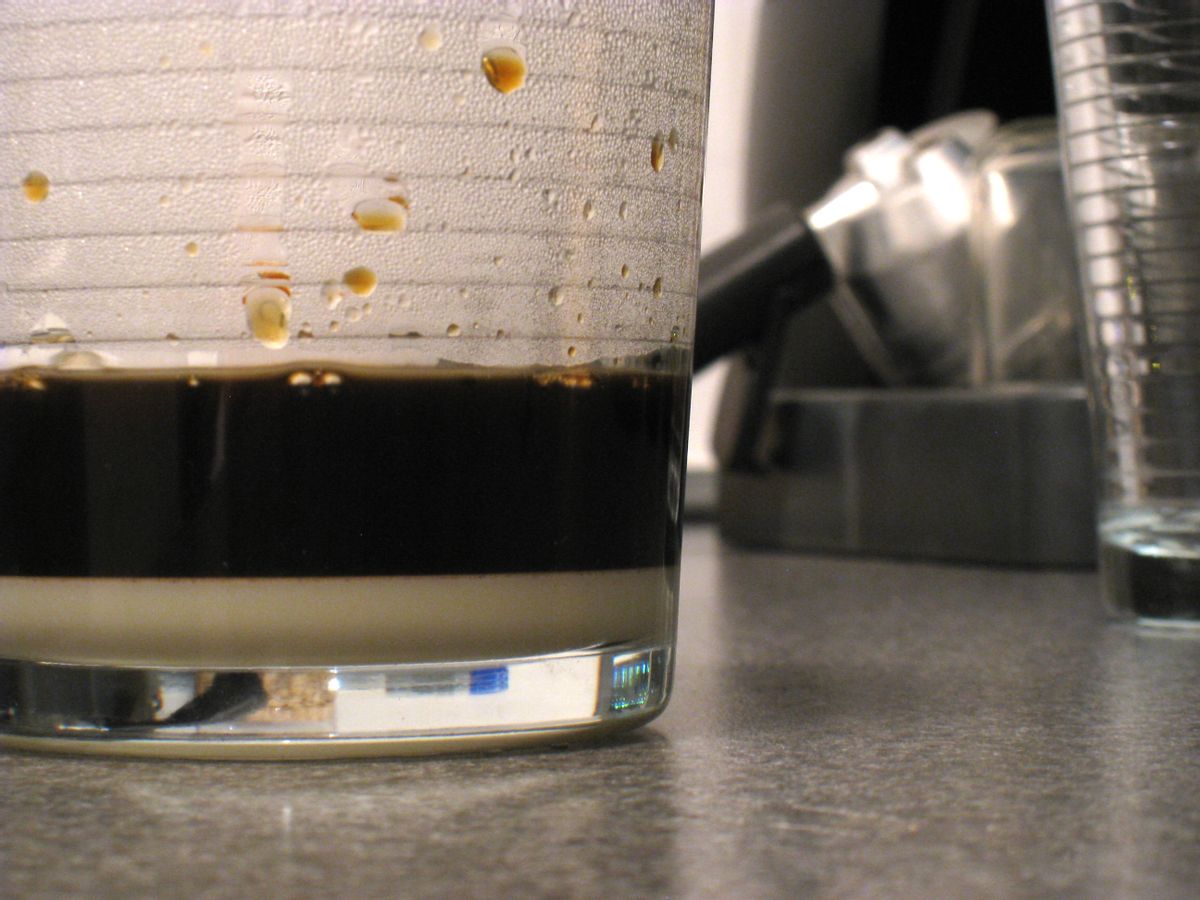 My 20-year-old self would give me an open hand across the face for saying this, but: You know, colonialism wasn't all bad. It gave rise, for instance, to Vietnamese coffee.

I understand if you need to walk away right now to get a cup, because even just the mention of this stuff has that effect on people.

But for those still with us, imagine a short glass with a hard dose of sweetened condensed milk, the color of ivory and the texture of hot fudge. The glass wears a metal top hat, a filter with grounds and water, which dribbles in drops of thick coffee, crude-oil black and nearly as bitter. They sit, stacked in two layers, until you take a spoon and give it a turn. For a moment, the coffee and milk swirl around each other, hesitating before coming together, a phenomenon smarter people than me call sensitive chaos. You take a sip, and the sweetness hits first, full and rich. Then your mouth dries a bit, like the tide pulling back, and coffee leaves a mellow bitterness. You take another sip, and suddenly everything is right with the world.

The French brought coffee to Vietnam in the 1800s, taking advantage of the climate to create massive coffee plantations. Despite bumper crops, it wasn't exactly a cafe au lait party: Vietnam was not home to a dairy-drinking culture. It was tough place to find fresh milk, and whatever there was wouldn't last in the heat.

Meanwhile, halfway across the world in New York, Gail Borden was heartbroken, his dreams of being the beef broth biscuit tycoon dashed. "Why? Why will America not love me for my beef broth biscuits!?" he shouted to the sky, fists clenched, hot tears and beef broth biscuit crumbs rolling down his face. Happily, he calmed down and concentrated instead on a way to make milk shelf-stable. Three years later, he found a way to sweeten and condense it down until it was like cows' own honey, packed it in tin, and gave the world innumerable gifts, including key lime pie, seven-layer magic bars, the thwarting of rampant malnourishment, and Vietnamese coffee.

In the 1920s, armed with a confidence in their colonial project and a really good cup of coffee, the French began importing their cafe culture, first at the Metropole Hotel in Hanoi. Andrea Nguyen, author of the celebrated "Into the Vietnamese Kitchen," said to me, "Hanoi is where the political hard-liners are, but it's also where you'll see old men strolling with berets. And from there, the culture of sitting in the cafe, drinking coffee and talking for hours, spread to the Vietnamese people. It may have started aspirationally, mimicking the French, but after a few decades it became firmly a part of our culture."

And, like every culture and every cuisine, it keeps changing. Nearly every time I order one in the U.S., someone reaches for an orange tin of Café du Monde, the coffee-and-chicory blend that's the pride of New Orleans. (Well, the beignets -- dough fried 'til pillowy and buried in powdered sugar -- are probably what they're really proud of, but you can't pack those in tins.) The Café du Monde is so ubiquitous that I thought it had somehow traveled from Louisiana, through some Francophone space-time continuum, to become popular in Vietnam. My confusion got even deeper when I actually went to Café du Monde and saw that all the servers were Vietnamese.

"Well, when Vietnamese people came to the U.S. in the mid-'70s, many of them settled in New Orleans," Andrea said. "Their coffee back home was intense and bitter; the chicory in Café du Monde really matched that flavor, so the people who started working there got a taste of this coffee and started telling others in the community. It was a really small, tight-knit community, so word traveled to all over country."

"But I sometimes wonder: Did they think, 'We're from the Paris of the Orient, drinking this coffee, here, in the Paris of the Mississippi?' The Vietnamese are a very romantic people, so that story may have come together for them. A moment of enlightenment, fueled by a lot of caffeine." She laughed. "Probably it was just that the coffee was there and tasted good."

WHERE DO I GET SOME?

If you live near a Vietnamese community of any size, any restaurant will have it, hot or iced. (Iced, in particular, is amazing, like a coffee milkshake.) But since it's such an important part of the culture, you don't need to find a restaurant; look out for sandwich shops or bakeries, even ones sometimes hidden in video or jewelry stores. Chances are someone will have that orange tin and a can of condensed milk open.

If not, try this:

For the Vietnamese filter method, I'll just point you to this great tutorial. But I'll add two things: 1) If you want your coffee hot, I recommend heating (microwaving is probably easiest) your glass or cup of condensed milk first. And 2) Andrea has this to say about using the filter: "Basically put the coffee in, put down the 'press,' pour in the just-boiled water and hope for the best. If the 'press' loosens and bobs around, then you screw it down. I've not heard of the loosening the 'press' part and adding hot water. That sounds too fussy and fancy. But maybe that's the trick?"

If you don't have the filter or the coffee or the gumption, you can do the super-cheater method: brew a cup of the darkest, most merciless coffee you can stand, and stir in enough condensed milk to make it delicious. But you know, it just won't be the same.

Have any fun stories of where a dish comes from, or have any food origins you’d like us to look into? Send them to: food@salon.com.