Becoming a piece of meat 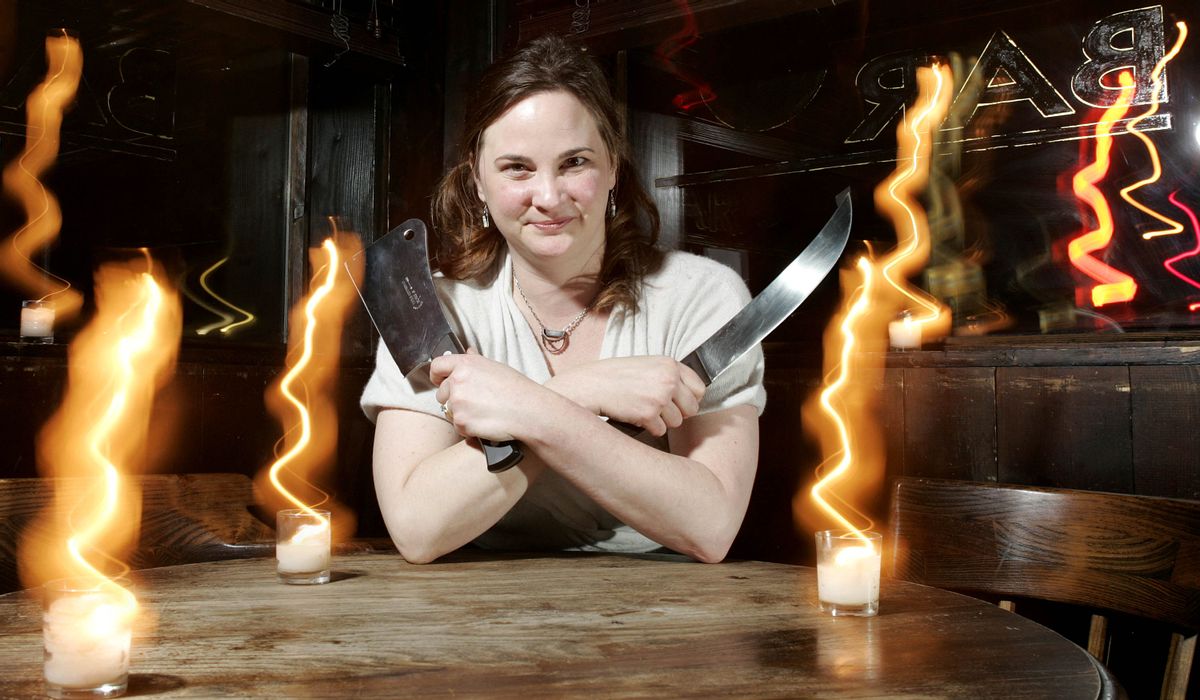 Julie Powell poses for a portrait in the Queens borough of New York Monday, Nov. 23, 2009. Powell is the author of "Julie and Julia," has a new book coming out all about butchering meat called "Cleaving". (AP Photo/Carlo Allegri) (Associated Press)
--

On the surface, a lot of things seemed to be going well for Julie Powell in the past few years. Her Salon blog, in which she cooked her way through Julia Child's recipes, turned into a bestselling book, "Julie and Julia." Nora Ephron's film adaptation, starring Meryl Streep and Amy Adams as Powell, was released this year to considerable box office success. And, throughout it all, she remained married to Eric, the gentle husband whom she had been together with since her teens.

In "Cleaving," Powell's memoir covering the years following her first book, things get less Nora Ephron, and a little more David Lynch. The book chronicles a rather tumultuous time in Powell's marriage, in which she became an apprentice at an upstate butcher shop, she and her husband had lengthy affairs, and, more shockingly, Powell experimented with sadomasochistic sex. It's hard to imagine Amy Adams' character spreading her legs in the foyer of a stranger who calls her a "pretty little whore" -- but, on Page 110 of "Cleaving," that's precisely where Powell ends up.

As you were writing this book, knowing that the Nora Ephron movie was coming, did it influence your choice of subject matter?

Honestly, when I was writing "Cleaving," my policy toward the movie was always very firmly to stick my fingers in my ears and go "lalala" very loudly and pretend it wasn't going to happen because of this terror of jinxing it. I wasn't thinking, "Oh, what would people like to read after seeing a Nora Ephron movie called 'Julie and Julia'?" Of course when the movie came out, once the movie publicist figured out that there was a book out there getting ready to be published, they flipped out a little bit and I'm sure a lot of them wished that "Cleaving" didn't exist, but, oh well!

Having written a small amount about my own personal life, I know that there's a  kind of discomfort that comes with writing about your own experiences -- especially when it comes to sex. Why did you decide to go into that territory?

It was a way of reenacting and trying to figure out what [my affair] really meant. Honestly, if you talk to my editor you should see what remains on the cutting-room floor. There were many instances where she was like, "Ehh maybe you needed to write this, but we don't need to put it in the book."

I'm assuming both your husband and "D," the man with whom you had the affair, have read the book.

Eric is an extraordinarily reserved person and we talked for a long time about what was in the book and would he give me the blessing for writing it. I wouldn't have published it if he hadn't. It's difficult for him and I think his reaction to this entire process is that I just need to sort of back off from it a little bit and let the book have its life. He's been extraordinarily great about it, but it's also something that we don't sit around the coffee table talking about in the evening.

I haven't spoken to ["D"] in nearly a year, but when he read the book in order to give the rights, it was all very cordial and he had a few notes of things he wanted to change for reasons of identification, which I was happy to do.

There are a few moments in the book, where you describe some fairly rough sex, both with your lover, "D," and a stranger. Why did you decide to include the rough stuff?

There was actually more on it originally, that we got rid of. I think for me some of the questions that I was asking myself were: Why this guy? Why this kind of sex? Everybody thinks about getting tied up and tickled with a feather every now and then -- but in terms of that real craving, where was that coming from? I think it was really tied to some other kind of deep, really deep psychological issues that I was having at the time and need for this self-punishment.

The anonymous sexual encounter was an important moment for me, because it was me trying to work out in a really, really crazy and self-destructive way who the hell I was. I think that when someone is processing a lot of stuff you make a lot of wrong turns and strange choices that are going to be -- for your average reader of "Julie and Julia" -- a little disconcerting. I discovered something about myself in doing that, and in the horror that I felt afterward, doing something that I felt in the moment was empowering and realizing in the moment of it that it couldn't be more opposite of empowering.

In some ways, it seems to me that butchery and sadomasochistic sex have a similar kind of stigma attached to them.

I think that there is a similar reason for my attraction to both. The BDSM stuff that I was doing, and was really very attracted to, had to do with the taking and the giving up of power and that balance that happens. In these rough sex encounters I was playing the part of the submissive, but I got power out of that because I was making these guys think they were powerful, and that was a sort of power in itself. I think that the butchering has the same kind of uncomfortable dynamic. There are knives; the men are very strong; the meat is dead.

The same thing goes with butchers. Now it's a little different because there's this rock-star butcher thing happening -- but the traditional image of butchering is violent and bloody and destructive, whereas it's actually a really delicate thing. Most of the butchers that I know, once you get about half an inch under the surface, they're these incredible, sweet, gentle men with a lot of skill and a lot of knowledge.

Do you feel like you were breaking gender taboos by becoming a butcher -- and writing so openly about the sex?

Just the idea that a married person taking a lover is something that men have been writing about for a long time, but women normally don't write about those experiences.

Was I wrong to read the book as an indictment of monogamy?

I'm now in a marriage that is much happier than it was, but I am skeptical of the sort of complacency with which traditional marriage is defined. I'd had very childish views of what a marriage is. We'd put ourselves in this box with a bow -- and I realized you can't live like that. Monogamy can work beautifully but it's a constant moving and growing and changing thing. A marriage doesn't get fixed, it moves. I don't know if I'd call it an indictment of marriage, I'd call it an indictment of the assumption that monogamy is the one necessary thing. I had to change how I was married and become a person who can stand on her own two feet. To find out that I could be a singular human being and also be in a marriage was the only reason that our marriage was able to survive.

I would be amused. When you look at what I write in the book, it's pretty tame. I've long been a supporter of people just being cool with all that stuff. I love the community, and what people are doing -- being very open and supportive. If they want to make me poster girl, I am perfectly fine with that.

In the book you seem to have a considerable amount of contempt for vegetarians. Why is that?

I was raised Texan. We're a liberal family, but there are some things Texans won't give up. I always judged their smugness. I also hated feeding them -- with them coming to my dinner table and going "ewww." Working at the butcher shop allowed me to gain a weighty sense of responsibility about where my food comes from -- so I'm less contemptuous, but I still hate their self-satisfaction. To quote "The Big Lebowski": "You're not wrong, you're just an asshole."

If "Cleaving" becomes a movie, who would you like to see play yourself?

I entertain this perverse fantasy of forcing Amy Adams to play me in every stage of my life at all times. The other person I'd thought of may be a little old: Catherine Keener. I love somebody who can be strong and neurotic at the same time -- or Kate Winslet, or Zooey Deschanel.

I was hoping you'd say something a little more bizarre, like Charlotte Rampling.