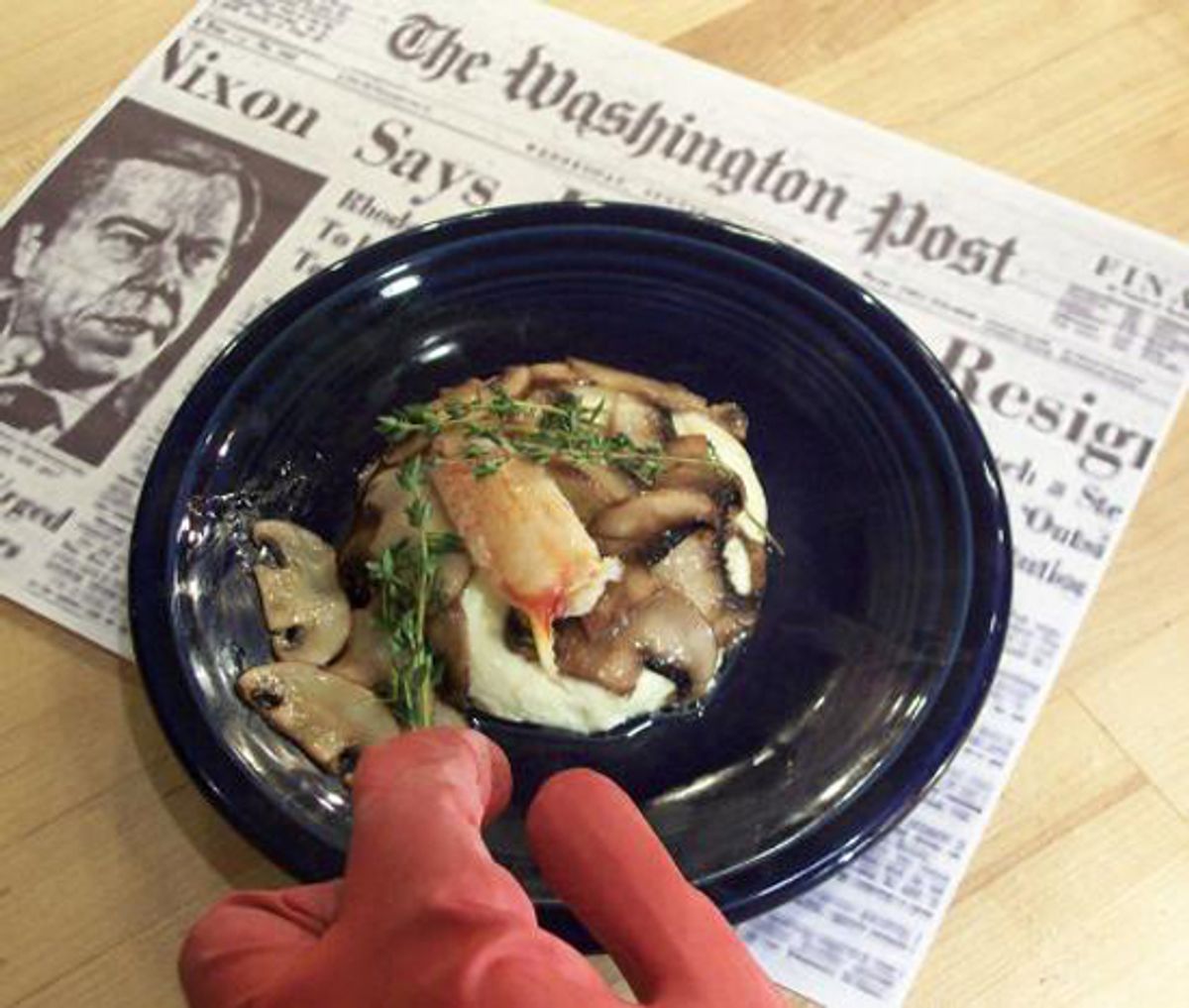 This winning entry for the Salon Kitchen Challenge -- in which we asked readers to come up with dishes commemorating  political events -- comes to us courtesy of Rebecca Farwell. Check out this week's Challenge here.

There I was, 13 years old, wrapped in a beach towel and glued to a television sprouting foiled rabbit ears. (Shut up, punks. Go ask your parents.) A saggy-faced guy waved from the steps of a helicopter, then off he went. Buh-bye.

It was bad enough that Agnew hailed from my own state of Maryland. Now, this. What was a girl to do? Head back to the water and play until dinner, that’s what. Nixon, Schmixon. My view of the matter, thoughtfully muttered on my way out the door: “He looks yucky.”

Salon, you ask so much. Last week you forced me to revisit that cold turkey in my fridge. This week I’m reliving one of the more baleful summers of my life.

Let’s get context out of the way so that we can move on to the food.

August 1974: My siblings and I were at my parents’ camp in Maine. Our mother’s doctor called to announce she had M.S., which brought our grandmother home from South Korea. And then, Nixon resigned. You could look at it this way: We were batting .500. It’s physics, really. For every action there is an equal and opposite reaction; the bad almost always comes with the good. Don’t say I didn’t warn you.

A menu to honor the event, time and place is a bit tricky. Like Dick. It must acknowledge the gestalt of the era (Campbell’s Soup-based cuisine, Pop Tarts, Chex Mix), the bounty of the region (wild blueberries and lobster), and a nod to the Sweaty Criminal in Chief. There are possibilities, but we must claim expansive culinary license.

Here's the menu, which I cooked and served to the hapless denizens of my house last night.

Here are the pictures and descriptions of each course. Enjoy secretly. I hollowed out a water chestnut, rolled it in crushed almonds and stuffed it with Italian sausage and porcini. The mushroom is a nod to my mother's ability to cook almost anything with a can of Campbell's cream of mushroom soup. I like to think I've evolved. And, if you worked for CREEP, you were down where the sausage was being made.

This is a take on Jerry Traunfeld's Herbal Kitchen recipe: Lemon Thyme Crab Flan. It was really wonderful. The milk and cream are infused with thyme. Paper-thin mushrooms are left to sweat in the oven for a few minutes and layered over the flan. I lightly pickled matchsticks of squash and thinly sliced onion. The lettuce was tossed with a basic balsamic vinaigrette. I topped it off with confetti red pepper and some blue cheese. Little-known Nixon quote: "I am not a crook ... neck squash fan, per se. But this is delicious!"

To Sirica With Love First you start with bacon. Set it aside, sauté onions, add white wine, throw in the Manila clams. Tiny, tasty, tender. They sweat like Nixon, but they don't taste like him. I added fresh parsley, crushed red pepper, the crumbled bacon and homemade linguine. Last, but not least, this nod to Gerald the Ford Taurus of Veeps, is also an homage to the blueberry Pop-Tart (a staple in my house growing up) and to the wild Maine blueberry, a little something God made just for me.