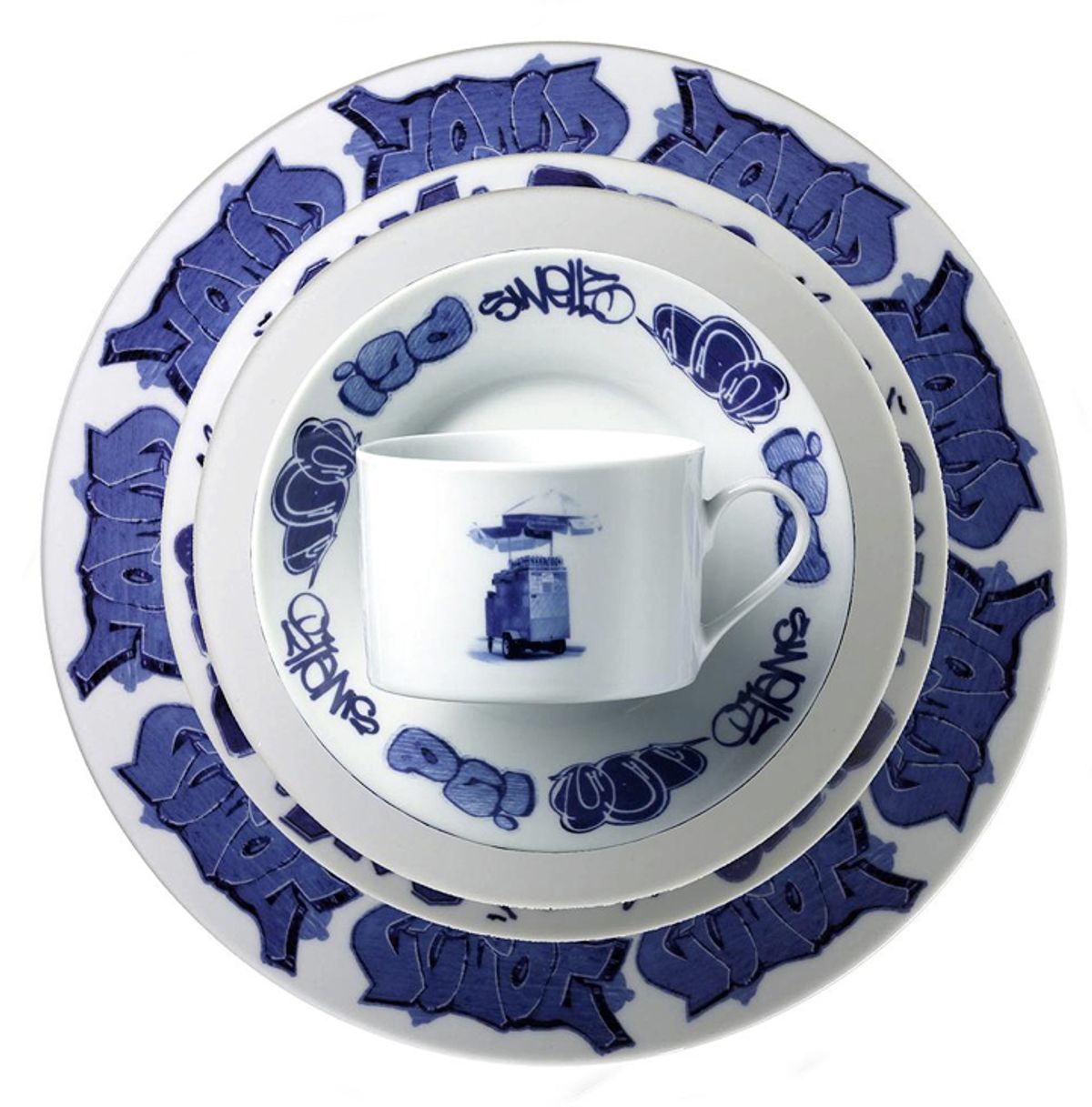 Lovegrove & Repucci's New York Delft China is a wonderful statement that confuses genres, and reminds us of the boxes that we instinctively put things in, surprising us while also being beautiful -- and usable.

You know the drill with traditional Delft china.  It's white, high-quality, handmade china with unmistakable blue graphic treatments.  Made in Delft, Netherlands, it is collected worldwide.  (Delft was actually a copy of Ming-era porcelain from China, which the Dutch East India Co. began to import into Holland in the early 17th century.  The Dutch copies gained a reputation of their own, and Delftware became a highly desired species of pottery.)

Of course, imagery on Delftware is not street art.  It's about as traditional as you can get.  So L&R took the Delft color palette and product silhouette and imposed New York graffiti imagery. The result is my favorite china.  It's beautiful, formal, elegant. But it's also gritty and provocative.  It makes you think about your preconceptions about art and taste and beauty.  It's truly fascinating.

I was in my 20s when modern graffiti emerged in the U.S.  I remember going to New York during the days of the Subway Movement and watching the transformation. It was a wild time. The art exploded in a broken city. There was crime, economic collapse and crumbling infrastructure. New York was bankrupt.  And there was this incredible new form of expression ... everywhere. Overnight.

The classic tableau for me -- driving in from Boston -- was a stripped car on the side of the West Side Highway, plundered to a skeleton, upside down like a dead bug, under a huge wall of graffiti.  It felt dangerous, and threatening, and new, and totally different. A doorway into a new and very uncertain era.

Having decided to feature the New York Delft china and having been led to recall the incredible energy of the graffiti movement, I thought we'd also offer a couple of books in the store to memorialize those times.  "Subway Art" by Cooper and Chalfant is a definitive book,  a great collection of subway photography.  Truly stunning.  Jon Naar's book "The Birth of Graffiti" chronicles the birth of the movement. It originally was published with 40 museum-quality photos; in the reprints it has been expanded to incorporate many more. Both of these books are absolutely beautiful.

Taken together, these products now reflect an important piece of cultural history. Americans -- having an uneasy relationship with street art and insurgency -- have waged war on graffiti. Just last year, Shepard Fairey was Barack Obama's official campaign artist. Yet when Fairey had an exhibition earlier this year at Boston's Museum of Contemporary Art and put up some street art in Boston to celebrate it, he was arrested.  Los Angeles, the modern epicenter of urban art, has recently launched a new crackdown. The energy of underground art in public spaces provokes a strong counter-reaction.

Which is very different from the equilibrium in arguably more culturally mature European countries. I was in Germany this past summer.  Berlin is covered in graffiti -- it is a graphic city.  The residents push strollers past walls of street art.  No one seems to mind and, for the most part, it seems to be viewed as a part of the city's cultural rebuilding. I put together a little gallery of East Berlin graffiti photos, you can see them here.

As a result of the American attitude, the amazing imagery of New York graffiti is now almost entirely gone. Which is, in a very real way, a tragedy. At least we have these wonderful books to commemorate it. And we have Lovegrove & Repucci's Delft china to give us a quite unexpected and fascinating perspective on that art form, and to make us think a little bit about the comparison to other art forms that, as a culture, we seem to consider more "respectable."