Attacks coincide with announcement of a date for parliamentary elections 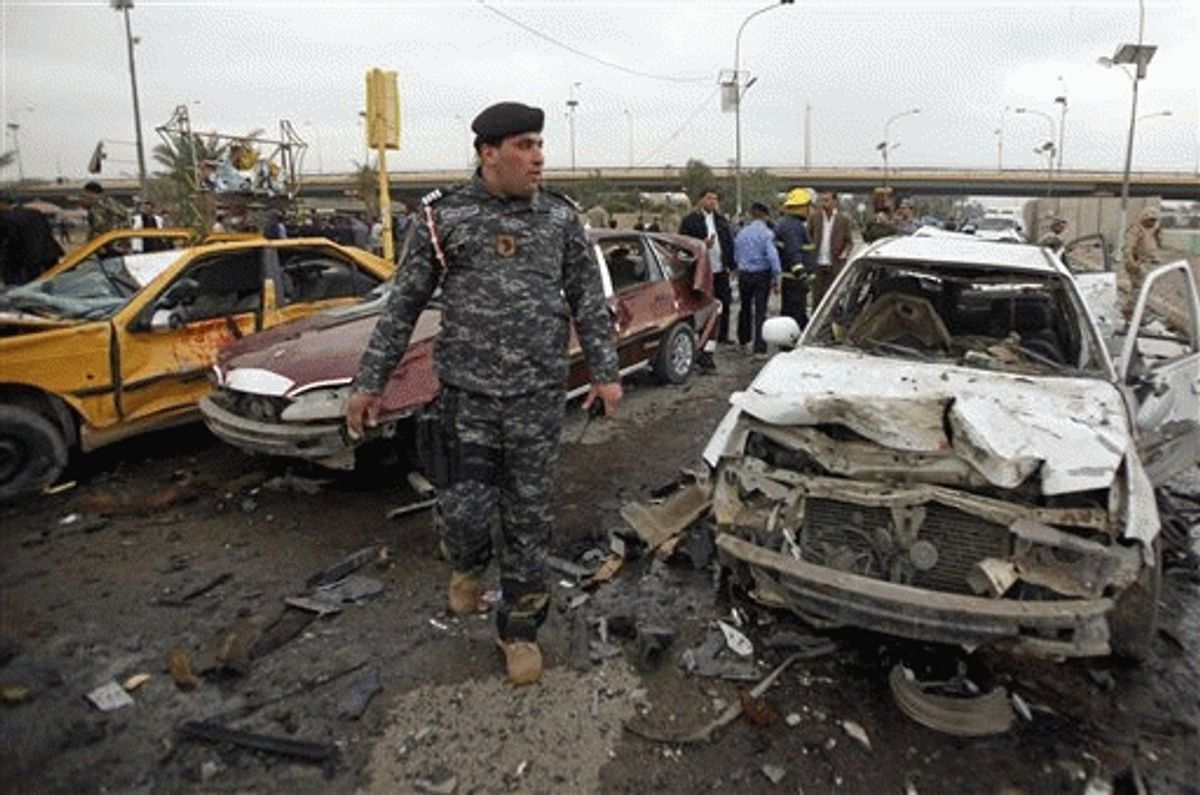 An Iraqi policeman inspects the site of a bomb attack near the Labor Ministry building in Baghdad, Iraq, Tuesday.
--

A series of coordinated attacks struck Baghdad Tuesday, including two suicide car bombers and another vehicle that blew up near government sites. At least 118 were killed and hundreds wounded in the worst wave of violence in the capital in more than a month, authorities said.

A total of five attacks, which also included a suicide car bomb on a police patrol, showed the ability of insurgents to strike high-profile targets in the heart of Baghdad and marked the third time since August that government buildings were targeted with multiple blasts that brought massive bloodshed.

The bombings reinforced concerns about shortcomings in Iraqi security as U.S. forces plan their withdrawal, and parliament held an emergency session with many lawmakers demanding answers for apparent security lapses.

Iraq's military spokesman blamed the carnage on an alliance of al-Qaida in Iraq and members of Saddam Hussein's banned Baath Party.

The U.S. military has sent some troops and forensic equipment to assist the Iraqis in the aftermath, said Army Master Sgt. Nicholas Conner, a military spokesman.

Overall violence has dropped sharply around Iraq in the past year, though insurgents have stepped up attacks at government sites in recent months. The bombings marked the most serious spate of violence in Baghdad since twin car bombs on Oct. 25 struck outside government offices, killing at least 155. In August, suicide bombers hit the finance and foreign ministries, killing more than 100.

Iraqi officials blamed the August and October attacks on al-Qaida in Iraq and loyalists of the Baath Party -- even bringing out three suspects on national television who gave what officials termed confessions.

But there are questions whether Iraq's leaders are trying to shift attention away from a possible resurgence of Sunni insurgents led by al-Qaida in Iraq. A rise in insurgent power could be a serious blow to the government's credibility before national elections, which were set Tuesday for March 6 -- a more than seven-week delay from the original mid-January date because of political bickering on the voting rules.

"The same hands that implemented the August and October attacks have carried out today's terrorist attacks against innocent civilians," he told The Associated Press.

Security forces worry the lead-up to the election date could bring an escalation in attacks seeking to discredit the pro-Western government of Prime Minister Nouri al-Maliki.

The core of the attacks hit central Baghdad with three blasts in the span of a few minutes.

The targets were the latest assaults directed at Iraqi authorities: near a compound with the Labor Ministry building, a court complex near the Iraqi-protected Green Zone and near the new site of the Finance Ministry after its previous building was destroyed in major attacks in August.

Police and hospital officials said at least 114 people were killed in those three car bombs and at least 192 injured. The officials spoke on condition of anonymity because he was not authorized to give information to media.

About an hour before the blasts, a suicide car bomber struck a police patrol in the mostly Sunni district of Dora in southern Baghdad, killing at least three policemen and one civilian and injuring five people, said a police official, who spoke on condition of anonymity because he was not authorized to speak to media.

Iraq's Health Ministry said as many as 513 people were injured.

Iraqi police said at least two of the Baghdad blasts were suicide bombers -- one driving a bomb-rigged ambulance heading for the Finance Ministry and the other plowing through a barrier near the Appeals Court building and exploding the car as guards opened fire.

The third explosion may have been bomb-rigged cars detonated by a timer or a trigger.

"What crime have we committed? Children and women were buried under debris. Why did they (Iraqi troops) let this car bomb pass!" cried Ahmed Jabbar as he staggered through the debris near the new Finance Ministry building -- an area where all cars pass through checkpoints manned by Iraqi forces.

"The parliament today is so angry toward the security services which we feel have failed to prevent these attacks ... We all feel -- and all the world feels -- that the Iraqi people are fed up of sufferings and something should be done to stop this."

The blast tore through a nearby market and toppled at least one building nearby. Rescue teams -- some using construction cranes -- tried to pull away the rubble to look for survivors.

The breakdown of casualties among the sites was not immediately clear, but the most serious bloodshed had been reported outside the new Finance Ministry building and the court complex, where at least one building was almost completely leveled.

Rescue workers climbed through twisted steel bars and crushed concrete at the flattened court building. Dozens of cars and trucks were burned and crushed.

Firefighters pulled survivors from behind huge slabs of toppled concrete. U.S. soldiers helped provide security and assisted the Iraqis with the collection of evidence from the rubble.