Is your man "pulling a Tiger"? 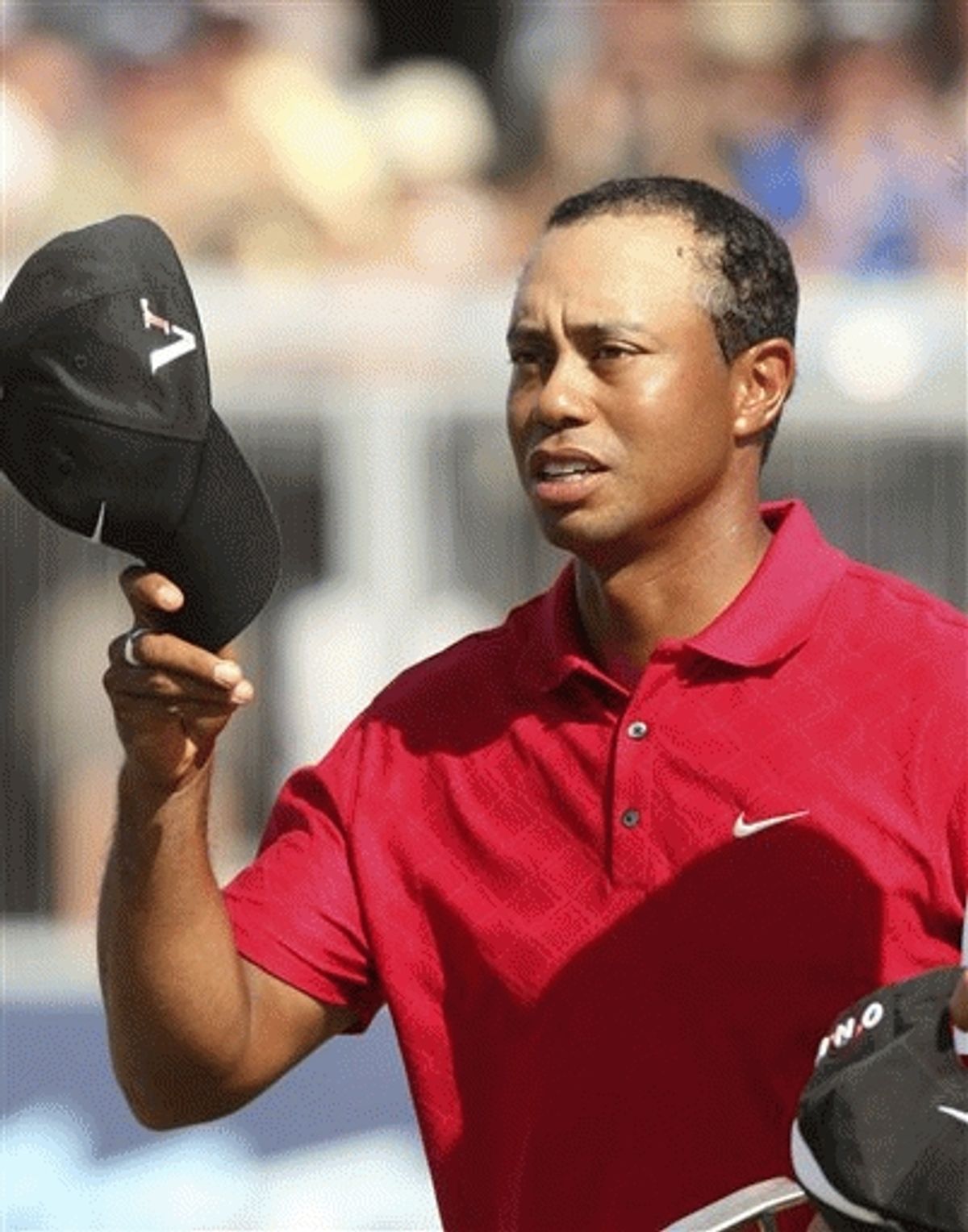 In this Nov. 15, 2009 file photo, Tiger Woods, tips his cap to the crowd after finishing his final hole in Melbourne, Australia, during the Australian Masters golf tournament. (AP Photo/Rob Griffith, File)
--

There are a lot of great things about being a ladyblogger, but one downside is the constant e-mails from publicists who just know your audience will be interested in their vaguely female-oriented products and "story ideas," no matter how useless and/or disturbing they are. If you've never seen such a pitch, Jezebel periodically rounds up some of the worst examples ("I don't know if you were aware, but FuzziBunz Pocket Diapers recently went through a small renovation of its One-Size Cloth Diaper"), and a quick review of my trash folder reveals e-mails about things like weight-loss cookies, hand sanitizers and hair extensions, all of which might as well say, "I have never actually seen your Web site" in the subject line. The best ones, though, are those that attempt to include a news peg. Today's mail brought us the subject line: "Story idea? 5 Ways to Use Technology to Catch Your 'Tiger' in His Tracks."

Ladies, are you suspicious that "your man is pulling a Tiger Woods"? All over this country, complete nobodies are probably juggling multiple extramarital affairs the press couldn't care less about, leaving those nobodies' wives and girlfriends with no way to uncover the truth, apart from paying attention and asking questions. Until now! "Intelius, an ecommerce company that empowers consumers with online information to make intelligent decisions" would like to offer five suggestions to "give you peace of mind without [your] being a stalker."

First, let me give you a tip for free: If you're so convinced your partner is cheating on you that you're moved to indulge in technology-assisted snooping, unless you are living in a madcap romantic comedy, you are probably not going to learn that his strange behavior is part of an elaborate engagement plan and/or a plot to demonstrate how much you mean to him. So "peace of mind" might be a bit of a lofty goal here. A more realistic aim would be "finding out the truth you already basically knew in a way that makes you feel like a huge jerk, at least if you have a soul." But if you're still interested, let's take a look at the totally not stalky suggestions for spying on the person you ostensibly trust most in the world.

Suggestion No. 1: "'Forget' your smartphone in his car and continue sharing your location. Log into your Google account and you'll be able to 'follow your phone.'" What you won't be able to do, of course, is use your phone. But hey, who needs to check in at work or make plans with friends and family when there's sleuthing to be done? Of course, if you'd rather just steal his phone, then you could make use of the Reverse Cell Phone Directory. "Intelius's service allows users to look up unfamiliar cell phone numbers to find out who is calling their boyfriends, girlfriends, etc." I would suggest that asking is another way to find that out, but who am I kidding? Anything that involves trusting your partner or acting like an adult is long out the window in this scenario. Next step: Facebook! "Is there a sudden and noticeable increase in fb activity between your man and women you've never heard of before? You may not have his password, but you can still check in to see who has been giving him attention." (And if you do have his password? Even better! Nothing solves relationship problems like reading through your partner's private messages.) Checking his Facebook activity is obviously a brilliant suggestion if you're lucky enough to be dating someone who's not only cheating, but stupid enough to leave evidence of it visible on a public social networking page. But if you're not so lucky, at least maybe you can have a fight about some random woman he's not seeing! That's sure to be terrific for both your relationship and your own position relative to the moral high ground.

If those suggestions don't satisfy all your totally not stalky needs, you could also try "SlyDial. A voice messaging service that connects you directly to someone's mobile voicemail so you can covertly see who is calling your husband, bf, etc." What? You say that does sound a little stalky for your tastes? Come on! I mean, you're just breaking into his voice mail, not putting him under video surveillance or anything! Oh, wait. Final idea: "Webcams. While it should be a last resort, concerned mothers install nannycams, so why shouldn't suspicious wives install hidden webcams?" Um, because their husbands aren't children? Because it's a hideous violation of his privacy? Because if you think installing a webcam to keep track of your husband's movements sounds like a good idea, A) your relationship is almost certainly not worth saving, no matter what you find out, and B) you should probably see a therapist about your control issues?

I mean, here's what I don't understand (which is among the many reasons why I'm not the best person to send such a pitch to): If you're so suspicious that you're willing to follow any of this advice, let alone the most invasive suggestions, why wouldn't you just leave him? What is the payoff of spending time, money and energy to monitor a dude you do not trust, in sneaky, underhanded ways that will guarantee he doesn't trust you, either? Because realistically, the only possible positive outcome is that you learn he's not cheating, and by some miracle, he never learns that you went all Nancy Drew on him -- and the relationship probably ends anyway, because the fact that you felt compelled to invade his privacy so spectacularly indicates that it was already completely freakin' broken. And that the problem was not just him.