Sex, ghosts and infant monkeys featured in the finest storytelling of the year 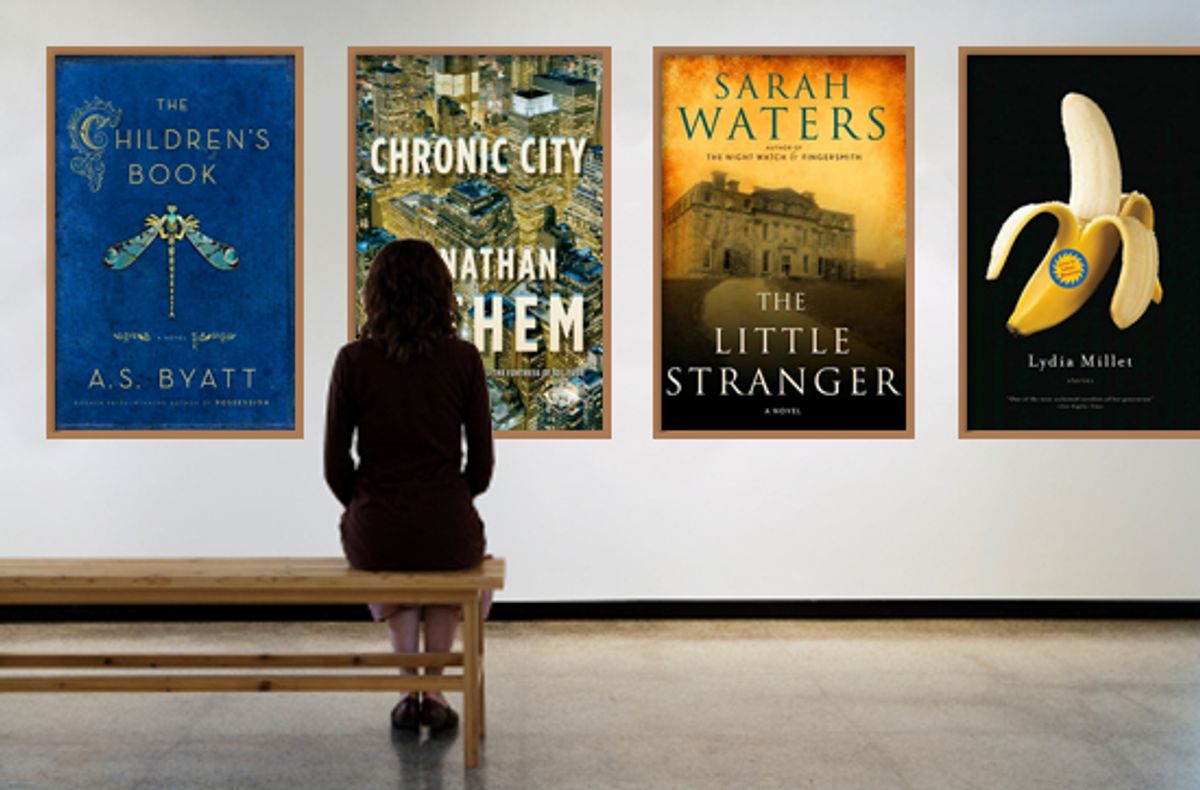 All best-books lists are pretty subjective, none more so than a list of the year's best fiction. For example, I probably experienced the most unadulterated readerly bliss this year while buried in the pages of Lev Grossman's "The Magicians," but then the quirky theme of Grossman's novel -- how a child steeped in literary fantasy like the Chronicles of Narnia comes to terms with the ambiguous nature of adulthood -- is virtually the same as that of my own nonfiction book. They even have almost the same title! And the author is a good friend. If that's not too many caveats for you, dear reader, then you can consider this a strong recommendation.

The truth is, there's enough great fiction out there that it makes sense to reach for a certain breadth, balance and variety. This year's Booker Prize short list was so good, it's tempting to simply reproduce it, but an all-Brit list would be as cockeyed as, say, an all-male one. In the end, we've kept the Booker crowd down to just two. Hillary Mantel's "Wolf Hall" was neck and neck with A.S. Byatt's "The Children's Book," but a shade more celebrated, which tipped the balance in favor of Dame Antonia.

Behind all the more ephemeral trends -- vampires, Swedish mysteries, etc. -- most readers still seek the same thing in great fiction: a sojourn, however brief, into another world and into the hearts and minds of the people who inhabit it. Here's our list of five books that made that happen in 2009.

by A.S. Byatt
This ravishing epic of the Edwardian era traces the lives of several interlocking families, at the center of which is Olive Wellwood, who is based on the great children's novelist E. Nesbit. The novel begins with an idyllic amateur production of "A Midsummer Night's Dream" in the English countryside and winds through a series of often disturbing revelations about the participants. Their shared obsessions include fairy tales, the Arts and Crafts movement, social utopias and sex, but perhaps the most striking of all Byatt's themes is the drive to create and how it shapes (some would say distorts) the personalities of those possessed by it; nobody writes better about this than she does. This a classic Byatt fusion of fact and uncannily luscious imagery, mixed in the ideal proportions: not too hot, not too cold -- just right.

"Await Your Reply: A Novel"

by Dan Chaon
This elegant page-turner begins with three seemingly disconnected characters -- a man in search of his long-lost twin, a high school girl getting the hell out of Pompey, Ohio, and a college student succumbing to the criminality he believes is in his blood -- all fleeing across forgotten stretches of the American heartland. Its theme is identity and the theft thereof, but also our national dream of jettisoning our old selves and becoming someone new. Chaon is that rare novelist who can combine intricate, suspenseful plotting with fully realized characters and unfussily lovely prose, but his great achievement here is the tenderness with which he explores the enigma at the center of the novel: What does it really mean to have a self, and what do you have left if you're foolish enough to throw it away?

"Chronic City" by Jonathan Lethem
A great New York novel should aim for the universal by way of the parochial. The Manhattanites in Lethem's near-future/alternative-now metropolis experience all the crises and travails of 21st-century life in a slightly more concentrated form. (It takes a novelist of exceptional talent and nerve to make you believe that matters of moment can hang on the outcome of an eBay auction.) A former child star coasting on his fading fame, a brilliant but terminally eccentric rock critic, a sarcastic ghostwriter and an activist turned municipal bureaucrat stumble through a city riddled with unreliable rumors, insufficiently explained disasters, dilettante millionaires, imperious celebrities and other signs and wonders. What they -- what all of us -- yearn for in a world full of engineered appearances and emotions is the truly beautiful and the truly moving. Can they find it, and will they even recognize it when they do? On this you can count: "Chronic City" is the real thing.
READ SALON'S INTERVIEW

by Lydia Millet
This collection begins with a short story about Madonna going on a grouse hunt, which might sound like an inauspicious start for a book whose theme is loss on an epochal scale. Guess again: With immense confidence, Millet takes a motley assortment of famous or pseudo-famous figures -- Thomas Edison, David Hasselhoff, the zoologist from "Born Free," a Sharon Stone impersonator -- and gives each a transformative encounter with an (often imperiled) animal. The result, a cumulative effect formed by all the stories in the collection, draws illuminating connections and comparisons between the trivial and the eternal. Millet's vision is startling, as often tragic as it is hilarious (and she can be very, very funny), but always shot through with the mystery of existence, a gift we can barely manage to appreciate even as we carelessly steal it from the rest of the earth's denizens. "Love in Infant Monkeys" is a slyly and unsentimentally profound exploration of what human beings can (but very seldom do) learn from our fellow creatures.

"The Little Stranger" by Sarah Waters
Waters takes one of narrative literature's most venerable genres -- the ghost story -- into fresh territory. Haunted houses usually stand as metaphors for misbegotten psychosexual situations. In "The Little Stranger," Waters masterfully redeploys the gothic tale to address the great theme of the British novel: class. During the lean years after World War II, a rural physician ingratiates himself into the remnants of a local "old family" as they rattle around their decrepit but still beautiful mansion. In time, eerie manifestations of some indistinct yet malevolent force begin to torment the house's aristocratic residents. What -- or, rather, who -- is causing the strange noises and mysterious stains? At once innovative and genuinely creepy, "The Little Stranger" is an astonishing performance, right down to its devastating final sentence.
READ SALON'S REVIEW