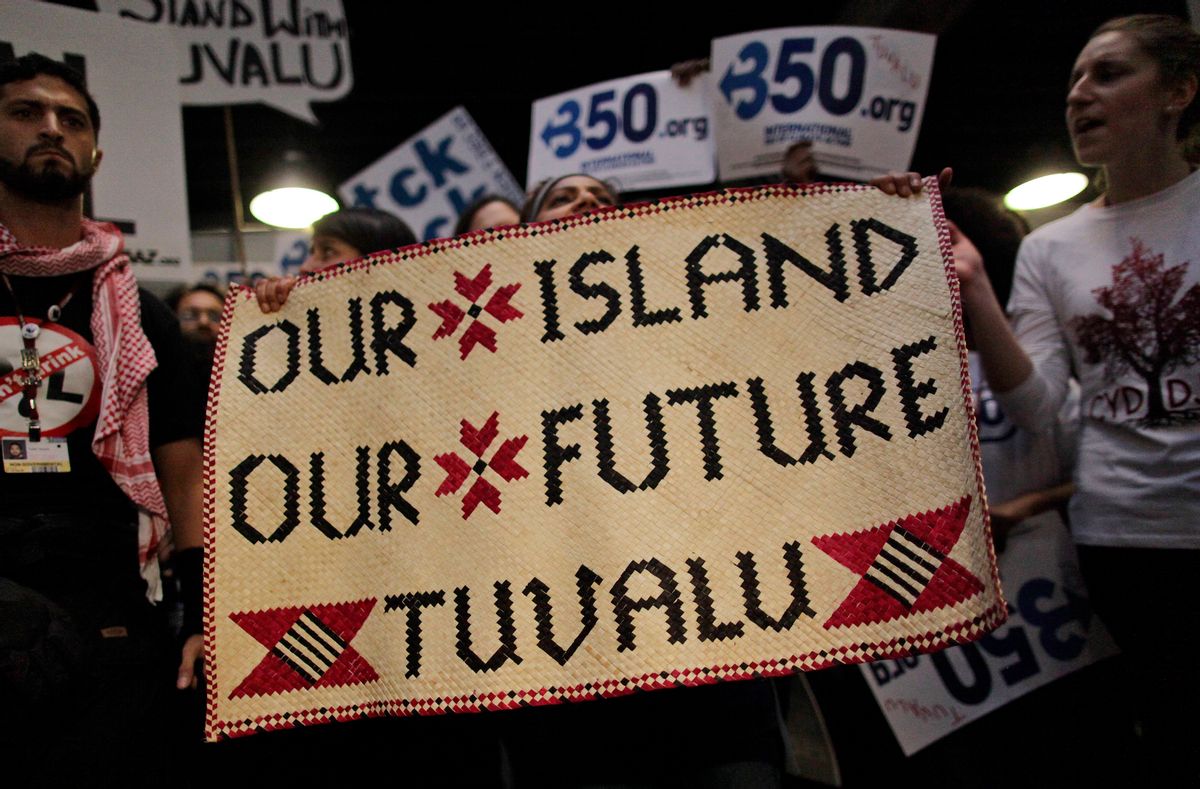 Activists supporting the tiny Pacific island of Tuvalu demonstrate in the lobby of the Bella center demanding a better deal for all island states at the UN Climate summit in Copenhagen, Denmark, Wednesday, Dec. 9, 2009. The Pacific island of Tuvalu has been rebuffed at Copenhagen after demanding strong action to curb global warming.Tuvalu proposed amending the U.N. climate treaty to require the world's nations to keep the rise in temperatures to 1.5 degrees C (2.7 degrees F) above preindustrial levels. (AP Photo/Anja Niedringhaus) (Associated Press)
--

If I were to guess which group of people currently living on the planet cared least about the ClimateGate hacked e-mail controversy, I'd bet on the citizens of the Alliance of Small Island States. Members of the Alliance --- a group of about 45 islands and other low-lying nations -- take rising sea levels a bit more seriously than your average think tank funded by Exxon. Their very existence is threatened, and they are making a stink about it at the climate change talks in Copenhagen.

A study published this week in the Proceedings of the National Academy of Sciences contends that global sea levels may rise almost two meters by the end of this century, faster than predicted by the International Panel on Climate Change. Tuvalu, a South Pacific nation where the highest point is only 4.5 meters above sea level, is especially desperate to stay afloat. On Wednesday, the country submitted a new, improved tougher version of the Kyoto Protocol -- the so-called Copenhagen Protocol. Tuvalu wants Copenhagen attendees to commit to holding the rise in global temperatures to 1.5 degrees Celsius -- instead of the 2 degrees commitment currently supported by the "major economies."

Tuvalu is fighting an uphill battle. As the Guardian's John Vidal explains, keeping the lid on rising temperatures to 1.5 degrees will be extraordinarily expensive and difficult.

An extra 0.5C drop in temperatures would require vastly deeper cuts in carbon dioxide and up to $10.5 trillion extra in energy-related investment by 2030, according to the International Energy Agency.

Holding temperatures to an increase of 1.5C compared to preindustrial levels would mean stabilizing carbon concentrations in the atmosphere at roughly 350 parts per million (ppm), down from a present 387ppm. No technology currently exists to feasibly remove CO2 from the atmosphere on a large scale.

So far, the most consistent story to emerge from Copenhagen has been the theme of discord. On Tuesday, poor nations attacked rich nations for supposedly secretly scheming to abandon the Kyoto Protocol. Today, China and the U.S. are arguing about commitments to limit or cut greenhouse gas emissions.

But Wednesday's news, as emphasized by Angel Hsu and Christopher Kieran, who are tracking China's participation in the Copenhagen talks for Yale University, represents an entirely new axis of conflict. For the first time, developing nations aren't speaking with the same voice on climate change. China and India have no intention whatsoever of supporting the Tuvalu proposal.

Tuvalu's position is backed by the small island states (AOSIS) and some African nations and up to this point, all members of the Group of 77, the now 130-country block of developing nations. China's reaction to the Tuvalian proposal marks for the first time a significant rift between China and the G77....

China and India believe that their aspirations for economic growth would be crushed by any kind of crash effort to cut emissions. Tuvalu and the other low-lying nations believe they will be swamped into non-existence, period. Unfortunately, it's no contest. Getting a binding agreement out of Copenhagen will be a Herculean task, but even if achieved, will undoubtedly not include the targets necessary to save global coastlines. Tuvalu is doomed.