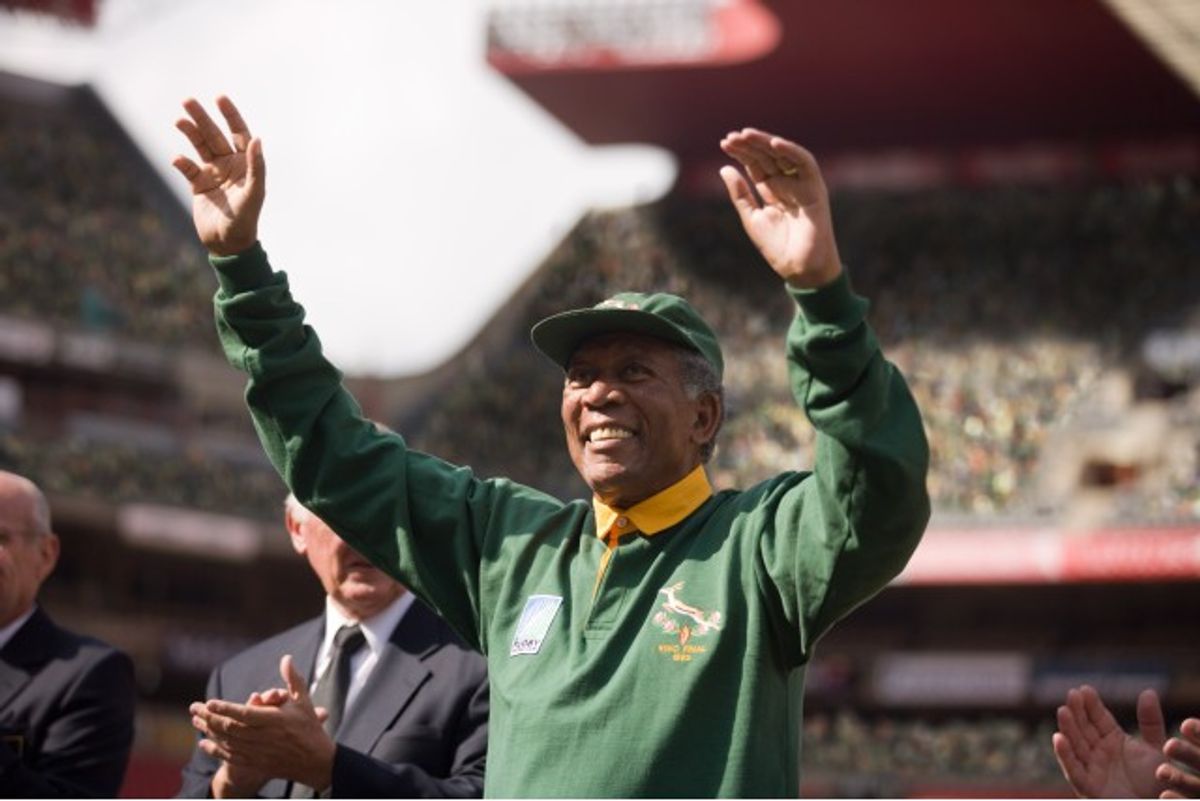 Even though it's based on real events, there are moments in Clint Eastwood's "Invictus" that seem as artificial as the thatch of bright dyed-blond hair on Matt Damon's head. Damon's character here is Francois Pienaar, the captain of the South African national rugby team, the Springboks, which made a historic leap for its country when it won the World Cup in 1995. In our first glimpse of him, he's a bulked-up lug of a guy taking up real estate on his mother's living-room couch, accepting the super-nutritious power shake she's concocted for him. With his button nose and beefy build, he looks as if he's auditioning for the title of World's Oldest Teenager.

Francois will be instrumental in a plan hatched by then-recently elected President Nelson Mandela, played here by the aggressively noble Morgan Freeman. The country's black population -- the majority -- hates the nearly all-white Springboks, seeing them as a relic of apartheid; they attend Springbok matches, but they all too happily cheer for the opposing team. The country's National Sports Council is even making moves to abolish the team, but Mandela intervenes. Wouldn't it be more unifying, he wonders, to make all the people of his country, black and white, love the Springboks? And so he woos Francois, drawing him into a Springbok image makeover that includes sending the team into townships to play ball with the impoverished black kids who live there.

And that, in a more succinct nutshell than the rambling filmmaker Eastwood would ever give us, is the gist of "Invictus," a mildly rousing and reasonably satisfying picture about one man's efforts to mend the rifts among his countrymen. "Invictus" is much longer than it needs to be: Like most of Eastwood's movies, it drags when it needs to sprint. The first half-hour in particular is a slog, a Mandela primer in which Freeman gets to show off how suitable he is to play a great world leader. He makes much use of the patented sly, witty smile, turning it on as if on cue, and imparts words of wisdom in gently rolling, master-thespian tones. Admittedly, after you've been the voice of God weighing in on the life-and-death saga of penguins, there probably aren't many heights left to scale. Playing a figure as lauded and beloved as Nelson Mandela is an understandable next step.

But if you can get through that first half-hour of setup, "Invictus" becomes both more ideologically resonant and more fun. Once Freeman has established that he's playing a Great Man, he relaxes a bit and starts to play a human being. And even Damon's hair begins to look less comical. Eastwood is often lauded for his great artistry as a filmmaker, though more often than not he's merely trotting out hoary clichés (both thematic and visual) and cobbling them together in rickety constructions that vaguely resemble a grand, old-Hollywood style of filmmaking. Eastwood's style isn't interesting; what is interesting about him, particularly in more recent movies like "Gran Torino," is his B-movie-style bluntness when it comes to social issues. In "Gran Torino," he played a retired Detroit autoworker who was at first dismayed to find his nice white neighborhood invaded by Hmong immigrants. And then gradually, he gets to know his neighbors as people and realizes they have the same sturdy values of family and community that younger white people -- even members of his own family -- have lost. He also realizes he just likes them.

Is that idea blindly conservative or socially progressive? It's both, which is why, when he's not making dreary prestige pictures like "Changeling," Eastwood's sensibility (if not his color-by-numbers filmmaking) offers some intriguing puzzles and contradictions. "Invictus" is deeply conventional in many ways: There are places where Eastwood and his regular cinematographer Tom Stern let the camera linger on an image or a face (usually Freeman's) for too long, the better to allow us to drink in what they perceive as its greatness -- and a little greatness goes a long way.

But for a picture with so much invested in its staunch sense of social justice, "Invictus" ultimately goes down not as medicine but as entertainment. The script, by Anthony Peckham (adapted from John Carlin's book, "Playing the Enemy: Nelson Mandela and the Game That Made a Nation"), makes its points clearly and succinctly, alluding just often enough to Mandela's 27-year imprisonment under the repressive white South African government. Eastwood isn't trying to give us a primer on South African history, thank God. But he does make use of bold shorthand to convey a sense of the conflicts and adjustments that South African citizens have had to struggle with. At one point he shows Francois' parents (played by Patrick Lyster and Penny Downie), sitting placidly in front of the television news, making cheerfully dismissive comments about Mandela's policies as their black housekeeper (Sibongile Nojila) silently irons in the background -- when she looks up at the television screen, what she sees there obviously means something very different to her. As a device, that shot is as obvious as hell; then again, apartheid wasn't subtle, and its scars haven't been easy to smooth over.

Eastwood eases up considerably when it comes time to show us the big decisive match against the New Zealand team. He doesn't shoot the game in a way that would help outsiders understand it, but at least he keeps things moving. By this point, Freeman has completely eased into the performance. The movie doesn't have to stress that Mandela was never much of a rugby fan. And so, in the picture, when he allows himself to be pulled out of a meeting of international bigwigs to be informed of a crucial Springbok victory, Freeman plays the moment with the grace of an unselfconscious, excited kid: By that point, Mandela has been caught up in the thrill of the sport -- it's no longer just a diplomatic tool. Damon, too, comes to look more comfortable in his role as an overgrown galoot, and he adds some shading to it: As Francois becomes swept up in Mandela's plan, his enthusiasm makes him almost physically buoyant -- his muscles no longer seem to weigh him down.

And at the beginning of that final match, we'll see Francois' parents standing with their housekeeper, singing the newly adopted South African national anthem. The father struggles with the words, but at least he's trying. "Invictus" is a strange piece of work. At its worst, it's ploddingly inspirational. But Eastwood, regardless of what his personal politics are, does seem to be using this episode from recent history as a way of reminding us that even social changes that appear to descend upon us rapidly have, in reality, been years in the making. Problems don't fix themselves overnight, or without effort. There's no point at which a society, or a country, can say, "We're finished changing now."