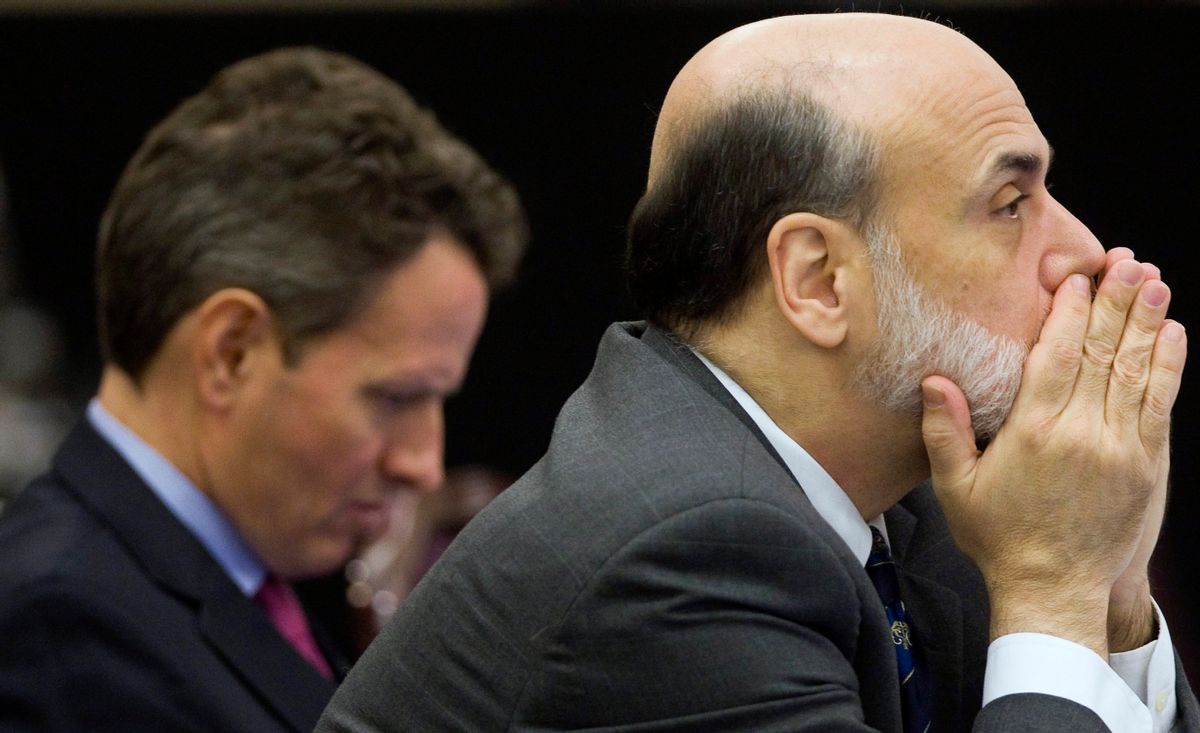 Washington's favorite term these days is "moral hazard." Though this buzzphrase may seem like a complex and even intimidating idea, most of us, whether consciously or not, understand the principle because it's basic common sense.

Applaud your kid -- rather than grounding him -- for punching another kid, and you've created a moral hazard that means he'll probably punch other kids in the future. Give your dog a treat -- rather than a scolding -- after he urinates in the house, and the moral hazard you've engineered makes it likely you'll soon be cleaning up even more sallow stains on your rug. In short, without consequences -- or worse, with rewards -- for wrongdoing, there is an incentive to do wrong. That's moral hazard.

To date, the national discussion about this concept has revolved specifically around financial moral hazard. And, as evidenced by trillions of dollars in public loans, guarantees and subsidies given to speculators to cover their massive losses, leaders in both political parties have no interest in preventing financial moral hazard -- despite stern press releases insisting the contrary. By rewarding rather than punishing Wall Street for losing irresponsibly risky bets and by holding out the promise of similar bailout rewards in the future, politicians have incentivized even more irresponsible risk-taking for years to come.

Firing Bernanke would tell other regulators that there are consequences for negligence. Instead, President Obama rewarded Bernanke with renomination and thus manufactured a pernicious problem. As economist Dean Baker says, just as bailouts create a financial moral hazard giving speculators no incentive to avoid excessive risk, so Bernanke's renomination creates a political moral hazard whereby regulators "will not have an incentive to do their jobs properly [because] there are no consequences" for failure.

The Democratic Congress, of course, could reject Bernanke's nomination for being "the definition of moral hazard," as Sen. Jim Bunning, R-Ky., correctly noted. But that seems unlikely, considering how many Democrats have been aggressively embracing moral hazard.

When Senate Democrats ratified Obama's nomination of New York Fed chief Tim Geithner as Treasury secretary, they rewarded yet another shill who also fell down on the regulatory job. When those same Senate Democrats considered the nomination of Gary Gensler to head the agency regulating derivatives, they could have rejected him for championing derivatives deregulation as a Clinton official and then cashing in as a Goldman Sachs executive. Instead, Democrats backed his nomination and effectively told every other Gary Gensler-like parasite that misguided actions and corruption don't prevent future promotion.

And let's be fair -- it's not just Democratic politicians who are creating political moral hazard. Many Democratic pundits, activists and voters continued cheering on President Obama while he stuffed his administration full of Wall Streeters -- and many of these rank-and-file voices attacked as disloyal those progressives who raised questions. That told Obama he faces few consequences -- and even defense -- from his own base for promoting those who engineered the economic meltdown.

The only open question is whether the public at large becomes complicit, too. Come Election Day, if there are no consequences at the ballot box for the politicians -- Democrat or Republican -- who legislated bailouts, supported these appointments, and are now working to undermine proposed Wall Street reforms, then America will have created the biggest moral hazard of all.